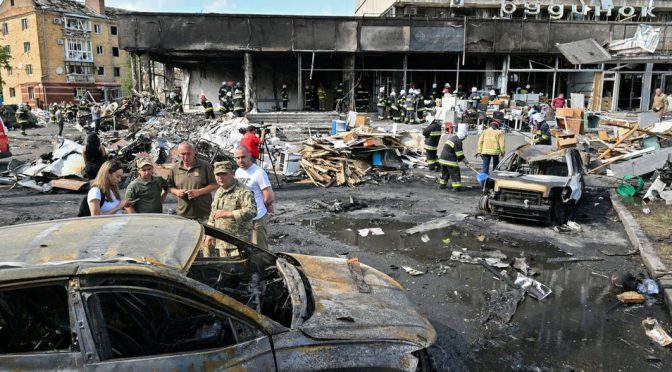 At 10:40 AM local time on July 14 three cruise missiles launched from a Black Sea-based Russian submarine struck an 8-storey office building in downtown Vinnytsia – a city of 370,000 located 260 kilometers southwest of Kyiv and 400 kilometers north of the Black Sea coast. (See map below).

In his nightly address to the nation, Ukrainian President Volodymyr Zelensky denounced the attack as a Russian terror bombing. He claimed the target was a cultural centre frequented by veterans, and that 23 civilians, including 3 children, died. He implored Western allies to designate Russia as a terrorist state.

First, mere hours after the attack the US Embassy in Ukraine posted a directive stating:

“The US Embassy urges US citizens not to enter Ukraine and those in Ukraine to depart immediately.”

Secondly, a day or so after the attack Zelensky fired his two top security officials – Prosecutor General Irina Venediktova, and Ivan Bakanov, head of Ukraine’s Security Service (SBU). Both were Zelensky appointees. Bakanov had been Zelensky’s childhood chum.

The rationale accompanying the dismissals complained of Ukraine’s government being riddled with treasonous Russian collaborators. The statement mentioned 651 ongoing prosecutions against subordinates of the two dismissed officials. Several additional intel officers were fired along with Venediktova and Bakanov.

What happened in Vinnytsia?

According to the Russian Defense Ministry:

“On July 14, Kalibr high-precision sea-based missiles attacked the building of the House of Officers in the city of Vinnytsia. At the time of the strike, a meeting was taking place between the command of the Ukrainian Air Force and representatives of foreign arms suppliers about the next batch of aircraft and weapons to the Ukrainian military, as well as organizing the repair of the Ukrainian aviation fleet.”

The Vinnytsia attack signifies a tactical change threatened by Putin and Belarusian President Lukashenko. Urban-situated offices of Ukrainian military and intelligence agencies are now fair game. On July 2 Lukashenko, responding to alleged Ukrainian provocations on Belarusian territory, warned Ukrainian leaders that he had instructed his Generals to place “decision-making centres in your capitol at gunpoint.” Putin made similar promises.

The Vinnytsia attack exposes critical deficiencies in Ukraine’s security/intelligence establishment. Here we have a top-secret confab convened in a remote location to discuss highly classified information; yet the Russians knew the meeting’s date, time, location, attendees and agenda!

At war’s outset 60 SBU agents fled to the Donbass taking with them knowledge of their former employer and their passwords, codes etc. Russian hackers already had access to the full breadth and depth of Ukraine’s digital infrastructure, and they now cooperate with Russian Aerospace’s electronic interception specialists. These spies find eager collaborators among the millions of Ukrainian citizens who, not being ethnic Ukrainians, aren’t happy with the direction Ukraine took after Obama’s 2014 coup; and they in turn are joined by millions of ethnic Ukrainians opposed to prolonging Whitey Biden’s War.

Vinnytsia was not the first meeting of Ukrainian brass interrupted by a missile. A huddle of frontline Army commanders got blasted a month ago. Moreover, since February 24 Russian missiles have destroyed several hundred buildings situated behind the lines, clear across Ukraine. Hitherto, prime targets have been munitions warehouses and barracks housing foreign fighters.

There is not a building in Ukraine the Russians cannot destroy given a few hours preparation. Given the velocities of Russian missiles and aircraft, and the mismatch in the adversaries’ electronic warfare capabilities, Ukrainians receive mere minutes of warning before the missiles strike.

The Russians have set their sites onto the urban work-stations of Ukraine’s command-and-controllers, and their American Deep State enablers. This tactical change, coupled with the intractable crisis in Ukraine’s intelligence services, explains the US Embassy’s “Get Out of Dodge” directive.

Ukraine’s problems are rectifiable only with a sweeping purge of its intel agencies, and by a complete overhaul of its air defences. The latter was under discussion in Vinnytsia when the Kalibrs crashed through the ceiling.