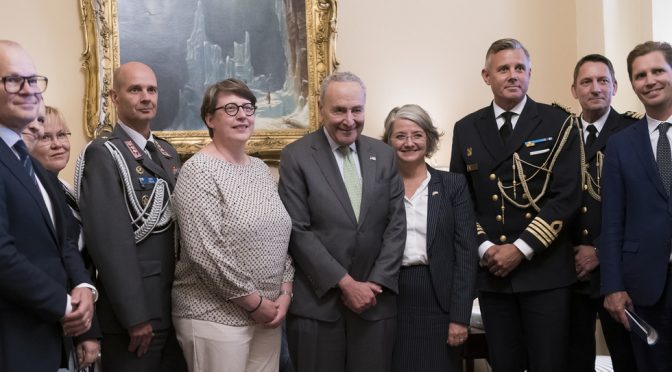 Senators overwhelmingly back Finland and Sweden’s accession, while shooting down an amendment seeking to limit NATO’s war powers.

The US Senate has voted overwhelmingly to ratify Sweden and Finland’s membership of NATO, another step toward expanding the US-led military bloc after its 30 members formally committed to the move.

Lawmakers approved the measure 95-1 on Wednesday, in what President Joe Biden called a “historic vote” which “sends an important signal of the sustained, bipartisan US commitment to NATO.”

“The United States remains committed to the security of Sweden and Finland. We will continue working to remain vigilant against any threats to our shared security,” the president added, vowing to sign the accession protocols to formally approve the two countries’ membership.

Missouri Republican Josh Hawley was the sole senator to vote against ratification, arguing that “sending more forces and resources to Europe to defend new allies” would not help to “strengthen our deterrent posture in the Pacific,” where he and fellow Republicans have repeatedly warned of the alleged threat posed by China. Senator Rand Paul of Kentucky, meanwhile, voted ‘present,’ the only other lawmaker who did not approve the resolution.

A libertarian-leaning Republican, Paul also introduced an amendment which would have reasserted Congress’ authorities to declare war, stressing that the collective defense provisions of the NATO bloc do not supersede the US Constitution. It was defeated 10-87, with only a handful of Republicans supporting the measure. Senator Mitt Romney (R-Utah) said the amendment might show “cracks” in Washington’s commitments to “mutual defense” and NATO’s support to Ukraine in its war with Russia.

With Wednesday’s vote and President Biden’s signature, 20 of NATO’s 30 states will have ratified membership for Stockholm and Helsinki, according to the Hill. They require unanimous consent from the alliance in order to join, and though both initially faced staunch resistance from Turkey, they appear to have reached tentative deals to satisfy Ankara’s conditions.

Spurred by Russia’s offensive in Ukraine, the two Nordic states decided to join NATO after decades of neutrality, officially applying for membership of the alliance back in May. Though Moscow has long aired concerns about the eastward expansion of NATO – Finland shares an 800-mile border with Russia – President Vladimir Putin has stated that Russia “has no problems” with either country, and does not see their membership as an “immediate threat.”