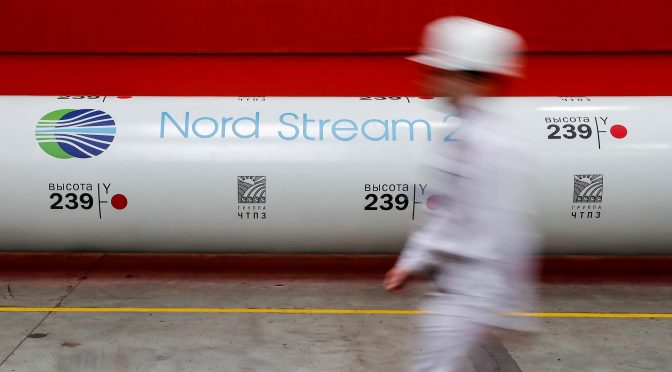 The absolute last thing that Poland wants right now is for everyone to remember how actively its leadership lobbied for exactly this outcome that’s since brought so much hardship to hundreds of millions of people, which is why it’s so important right now for activists to prioritize raising awareness of this “politically inconvenient” fact.

The entire US-led Western Mainstream Media (MSM) went wild on Friday after Gazprom announced the indefinite suspension of supplies through Nord Stream I due to technical malfunctions that were only just discovered. The Golden Billion’s perception managers speculated that Russia was weaponizing the export of gas to Europe as punishment for the bloc complying with the US’ counterproductive sanctions demands. The prevailing theory is that President Putin wants to exacerbate the EU’s impending energy crisis ahead of the coming winter in an attempt to pressure its leaders to coerce Kiev into concessions.

Whatever one’s views may be about that interpretation of events, there’s no denying that Europe’s in an unprecedented state of panic, especially considering the very likely possibility of large-scale socio-political unrest the longer that its systemic economic crisis lasts. To remind everyone, this crisis was brought about by the combination of complying with the US’ sanctions and Nord Stream I’s unexpected indefinite disruption. Likewise, there’s also no denying the following “politically incorrect” fact that’s being desperately suppressed by the MSM because it raises too many questions at this sensitive time.

Few folks remember it, but Polish Prime Minister Morawiecki demanded in late May ahead of the World Economic Forum in Davos that Germany unilaterally shut down Nord Stream I by the end of the year. Prior to that, he proposed including that pipeline in the Golden Billion’s sanctions package right after the latest US-provoked phase of the Ukrainian Conflict began over half a year ago. It’s now known just how disastrous the disruption of Russian exports through that route has been for European stability, which wasn’t unexpected but should make observers wonder why Poland wanted this predictable outcome.

From the get-go, this aspiring Central & Eastern European (CEE) hegemon has pushed for the most radical anti-Russian policies possible, with its leadership even going as far as boasting that they set the global standard for Russophobia. Part of the reason is due to the “negative nationalism” that’s regrettably come to influence the formation of Polish nationalism in recent years wherein Poles obsess over what supposedly differentiates themselves from Russians instead of embracing “positive nationalism” which refers to pride in what one is without comparing themselves to others.

The other reason is much more strategic and related to the desire to sabotage leading European countries’ efforts to maximize their strategic autonomy. In particular, Poland fears that a strong Germany will impose its envisioned continental hegemony onto all others, beginning with its eastern neighbor. Its leadership therefore decided to pursue a dual policy of presenting itself as the US’ leading anti-Russian force in Europe so as to become that declining unipolar hegemony’s top partner on the continent in parallel with trying to trick Germany into committing economic suicide.

The first-mentioned was achieved through its rabidly Russophobic policies while the second was advanced by consistently pushing for Berlin to unilaterally shut down Nord Stream I on the false basis of “solidarity with its fellow democracies”, the manipulative rhetoric of which the Polish Ambassador to India just referenced while trying to pressure Delhi into condemning and sanctioning Moscow. Even though shutting down that pipeline would damage Poland’s own interests, Warsaw wagered that its people won’t protest all that much since they’re so indoctrinated with “negative nationalism”.

That aspiring hegemon’s grand strategic interests with respect to undercutting Germany’s rise as a global power through the aforementioned means are regarded as much more important than its short-term ones connected with the disruption of the continent’s Russian energy supplies. What Poland has plotted all along is to mislead Germany into promulgating counterproductive policies that would irreversibly weaken its strategic autonomy vis a vis the US and thus enable Washington to restore its declining unipolar hegemony over Berlin and the bloc that it unofficially leads more broadly.

The purpose behind doing so is for the US to privilege Poland over Germany as its top European vassal as a reward for Warsaw perfectly marching in lockstep with Washington’s anti-Russian demands and tricking Berlin into irreversibly weakening its strategic autonomy to the point where America could successfully reassert its hegemonic control over the continent. The euro has dropped to its lowest rate against the dollar in two decades as a result of the joint US-Polish Hybrid War on Germany, which means that it’s unlikely that this aspiring global power can ever economically compete with the US again.

This outcome would have happened even sooner had Germany gone along with Poland’s ill-intended plan to sanction Nord Stream I half a year ago prior to announcing in late May like Morawiecki demanded at the time that it’ll unilaterally stop importing gas from this pipeline by the end of the year. The whole point behind pursuing these destabilizing objectives was for Poland to get Germany to weaken itself and the EU by none other than its own hand so as to ensure the successful reassertion of US hegemony over the continent in order to forever avert a rapprochement with Russia.

For as distant as that second scenario might have seemed up until recently, it was still possible in theory for a strategically autonomous Germany to eventually repair its relations with Russia after some time so long as the economic foundation of the bloc’s de facto leader remained comparatively stable and it was thus able to retain some degree of independence from the declining American hegemony. That’s precisely why Poland wanted Germany to get rid of Nord Stream I in order for its Hybrid War target to sabotage its own objective national interests.

Regardless of whatever one thinks about Nord Stream I’s latest disruption and whether it’s truly related to technical malfunctions or whatever else, this development dooms Germany to vassalhood status vis a vis the US in full accordance with the grand strategic outcome that Poland’s been pursuing for the past half-year already as was earlier explained. The unprecedented socio-economic hardships that the unexpectedly exacerbated energy crisis is bound to inflict on hundreds of millions of people in the EU makes this latest event extremely unpopular though, which risks making its Polish mastermind look bad.

Even though Poland ultimately wasn’t responsible for the outcome that it’s pursued for so long after it ended up officially occurring due to technical malfunctions and not Germany’s own hand, Warsaw still doesn’t want to be associated with the immense hardships that this development has inflicted on the European people. It intended for Berlin to be blamed for this, which would have destroyed its target’s soft power once and for all, but now the MSM’s perception managers can conveniently blame Moscow while simultaneously trying to make everyone forget that Warsaw’s wanted this all along.

The absolute last thing that Poland wants right now is for everyone to remember how actively its leadership lobbied for exactly this outcome that’s since brought so much hardship to hundreds of millions of people, which is why it’s so important right now for activists to prioritize raising awareness of this “politically inconvenient” fact. Europeans deserve to know that this is all part of the joint US-Polish Hybrid War on Germany for the earlier explained grand strategic aims even though the climax thus far was due to technical malfunctions and not Berlin being tricked into shutting down the pipeline.