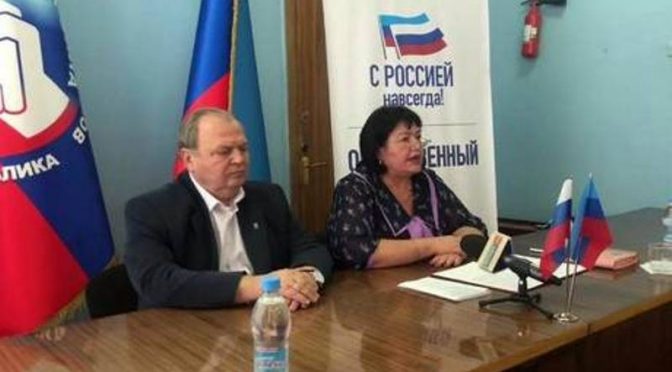 At least four Ukrainian territories have announced their plan to hold referendums for the purpose of formally ascending into the Russian Federation.

The leaders of the Zaporozhye Region, Kherson Region, Lugansk and Donetsk are saying that they want their people to gain more “certainty and a stable future” from Russia, which should further legitimize Russia’s ongoing special military operation [SMO] inside Ukraine.

A referendum on whether people in the region want it to go under Moscow’s sovereignty is set to start on Friday.

Zaporozhye Region in northeastern Ukraine will hold a referendum from 23-27 September on whether its people want to secede from the country and join Russia, the local administration’s head has announced.

A petition calling on the region’s military-civilian administration to hold such a vote was issued on Tuesday by a local pro-Russian group tasked with representing the general public. They asked the region’s authorities “to immediately organize a referendum on the issue of joining our region to the Russian Federation.”

“We want certainty and a stable happy future for our homeland,” the civic body’s head, Vladimir Rogov, said during a gathering in the city of Melitopol. “We are ready to fulfill our right for self-determination and settle once and for all the issue of the territorial status of our region.”

Later in the day, Evgeny Balitsky, the head of the region’s military-civilian administration, issued an order to hold a general vote as requested, scheduling it for September 23 to 27.

Rogov acknowledged that people in the Kiev-controlled part of the region were unlikely to participate under the current circumstances. Voters there would risk retaliation from the Ukrainian government if they did, he explained.

The region is split between Russian-controlled and Ukrainian-controlled parts. The latter includes the provincial capital Zaporozhye, located near the northwestern border of the region.

Earlier on Tuesday, a similar initiative was issued in Kherson Region, which is mostly controlled by Russian forces. The local administration’s head, Vladimir Saldo, ordered on Tuesday to hold a general vote on whether or not to join Russia.

Saldo picked the same timeline as his counterpart in Zaporozhye Region. The same dates were announced by the leaders of the Donetsk and Lugansk People’s Republics on Tuesday for their respective referendums on joining Russia.

Kiev previously stated that it would not recognize the outcome of the proposed plebiscites. The Ukrainian government threatened any would-be voters with criminal prosecution and a prison term of up to 12 years.

The Lugansk Civic Chamber has called on the state’s leadership to “immediately” hold a referendum.

A “referendum” on joining Russia should be held “immediately,” the Civic Chamber of the Lugansk People’s Republic (LPR) said on Monday. The body addressed the LPR’s leader, Leonid Pasechnik, as well as the republic’s legislature, urging them to speed up the process and hold the vote as soon as possible.

“The residents of Donbass made their choice back in 2014 at the self-determination referendum of the Lugansk People’s Republic, and all these years we have been waiting and believing that the second one will definitely follow, which will fulfill our dream of returning home – to the Russian Federation,” the deputy head of the Chamber, Lina Vokalova, stated.

Holding a vote is now crucial for the republic, as “the events of recent days have shown that the Kiev nationalists have crossed all the red lines,” she stressed.

“The Nazis mercilessly shell and stage terrorist acts against the civilian population of the Lugansk People’s Republic, seeking to scare us, and make us give up our dream and our ultimate goal – to join the Russian Federation,” Vokalova added.

Calls to conduct a referendum “immediately” have been unanimously supported by the Civic Chamber and submitted to Pasechnik and the LPR legislature. So far, the leader of the republic has not made any public statements on the initiative.

Donetsk’s civic chamber urged the head of the republic to hold a referendum on joining Russia soon, following Lugansk’s lead.

Addressing the head of the DPR, Denis Pushilin, the chamber said the time for “decisive actions” has come, urging him to hold the vote as soon as possible.

“All of us feel and know for a long time that Donbass is Russia, we have been fighting for this for eight long years. For this, we daily suffer strikes on our homes, streets, hospitals, schools and kindergartens,” the head of the chamber, Aleksander Kofman, said in a statement.

We want the border of the Russian Federation to lie between us and Ukraine! We want to become again a part of one big Motherland – Russia. The people of Donbass deserve it!

Earlier in the day, a similar call was made by the civic chamber of the LPR. It urged the head of the republic, Leonid Pasechnik, as well as the local legislature, to hold a referendum on joining Russia as soon as possible.

A similar stance has been set out by the authorities in the southern Ukrainian region of Kherson, which is currently controlled by Russian forces. The head of the so-called military-civilian administration, Kirill Stremousov, said the region’s residents “want guarantees that we will become a part of the Russian Federation.”

“Residents of Kherson Region call upon… and want to hold a referendum as soon as possible, because they are afraid that Russia might leave,” Stremousov told RIA Novosti.

Holding a referendum was how Crimea joined Russia early on, but the West continue to use the phrase “annexation by force” to demonize Russia. We can expect the same treatment when the above mentioned regions vote to formally join the Russian Federation through an open referendum.

We can expect that more territories in Ukraine will be encouraged to take the same action with this latest development, and the fact that Russia does enjoy the support of many allies outside of Europe and the bigger part of Eurasia, which effectively insulated it from the effects of the most comprehensive sanctions so far.

The alternative scenario is to welcome more weapons and Nazi combatants from the US, and NATO member countries that would prolong the agony of the Ukrainian population, which is what the warmongering chickenhawks really want.