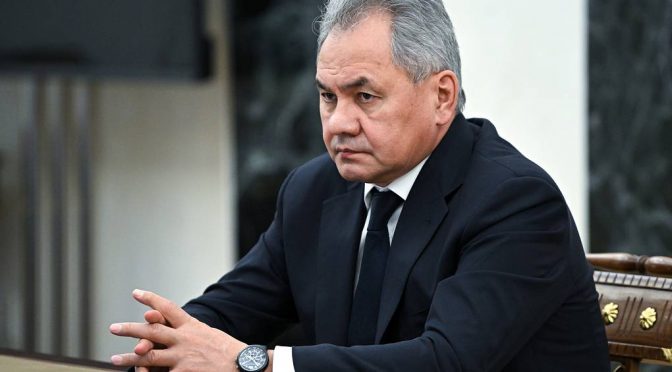 Russian Defense Minister stressed that Ukraine had almost run out of its own weapons of Soviet manufacture.

MOSCOW, September 21. /TASS/. Russia at the moment is conducting combat operations not only with Ukraine’s armed forces, but with the collective West, Russian Defense Minister Sergey Shoigu has said.

“I cannot but emphasize the fact that today we are at war not so much with Ukraine and the Ukrainian army as with the collective West,” Shoigu said.

He stressed that Ukraine had almost run out of its own weapons of Soviet manufacture.

“As we talk about this (about Russia’s struggle with the collective West – TASS), we mean not only the weapons that are supplied in huge quantities. Naturally, we find ways to counter these weapons. We have in mind, of course, the Western systems that there exist: communication systems, information processing systems, reconnaissance systems and satellite intelligence systems,” Shoigu said.

Earlier, Joe Biden insisted that Moscow made “overt nuclear threats against Europe” and displayed “a reckless disregard for the responsibilities of the non-proliferation regime”

“As for the address by the US president, I think that it was absolutely unseemly how it began and how it went mainstream, since it was framed around our country. The thing is that he began by allegedly quoting Russia’s president. He attributed remarks to the Russian president that our country was threatening the world with nuclear weapons,” she told the Soloviev Live TV channel on Thursday.

The diplomat noted that such a stance was a “propaganda tie-in, inflicted upon society despite what was actually said.” “And, unfortunately, this is just how this stance is again being presented in Western media outlets. And the US president just reaffirmed what is being spun in the US media,” she added.

Earlier, Biden insisted that Moscow made “overt nuclear threats against Europe” and displayed “a reckless disregard for the responsibilities of the non-proliferation regime.” That said, he asserted that “a nuclear war cannot be won and must never be fought.” Additionally, Biden vowed that the US was ready to take “critical arms control measures” regardless of the global situation.

On September 21, Russian President Vladimir Putin backed a proposal by the Defense Ministry and the General Staff on a nationwide partial mobilization and signed the relevant decree. He pointed out in a televised address to the nation that the line of contact in the zone of Russia’s special military operation stretches “over 1,000 kilometers long,” and …

… that the allied forces were fighting “not just against neo-Nazi units but actually against the entire war machine of the collective West,” which threatened Russia’s very existence. Putin also emphasized that Russia was ready to use all possible means to defend its territorial integrity and people.

Russia will fight for its independence for great future, Putin says

According to Russian President, “being part of the diverse Russian civilization is happiness,” but it’s also a responsibility and a duty.

VELIKY NOVGOROD, September 21. /TASS/. Russia will continue to defend its freedom and independence, culture and traditions for the sake of future generations and a great future, Russian President Vladimir Putin said on Wednesday at the festivities on the occasion of the 1,160th anniversary of the inception of Russian statehood.

“We will fight for our Fatherland, for our Motherland, the only one we have, for our freedom, independence and sovereignty, for our culture and traditions. We will defend and protect them in the name of our ancestors and our descendants, for the sake of Russia, its great history and great future,” he said.

According to Putin, “being part of the diverse Russian civilization is happiness,” but it’s also a responsibility and a duty.

“Our civilization is original, it has its own path, and there is not an ounce of swagger and a sense of superiority about this. This civilization is ours – that’s what is the most important for us.”

Since 1904 TASS has been Russia’s leading news agency. For more than 113 years, TASS has ceaselessly strived to deliver the latest and most accurate news from around the world.

There’s still a sizable part of the global population who believe that it was the US and EU forces which defeated Nazi Germany, and not Russia. The same group of people also have an outdated view that Russia is still a communist country today.

When these people are confronted with the fact that their government is actually controlled by Nazi ideologues, they plunge into a state of denial.

What they don’t realize yet is that the Nazi doctrines of the past and present can explain why government programs today are all designed for totalitarian control, e.g. Homeland Security, Patriot Act, Vaccine Passports, are all based on Nazi intrusive ideas. But hey, look over there!

The Russian Federation today is at war with Nazi war criminals as it was during World War 2, and if they won the WW2 for us, they can do it again with far more advanced weaponry, and with much greater allies from the Global South – all victims of Western imperialism.