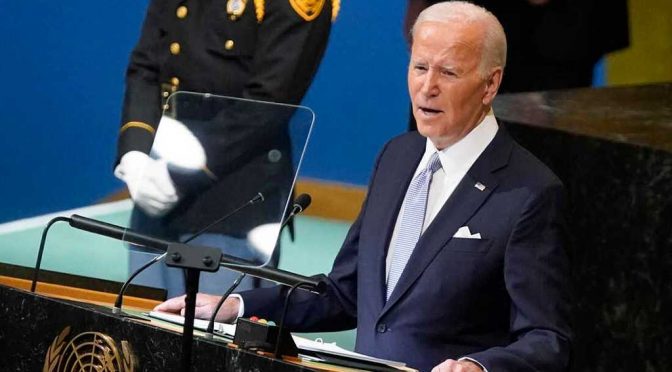 US President Joe Biden is living in an alternate reality completely devoid of facts and truth, as he put on full display for the entire world when he stood in front of the United Nations General Assembly days ago, to declare:

“Russia has shamelessly violated the core tenets of the United Nations Charter, no more important than the clear prohibition against countries taking the territory of their neighbor by force…If nations can pursue their imperial ambitions without consequences, then we put at risk everything this institution stands for”.

Biden conveniently forgotten the fact that the United Nations Secretary General Kofi Annan himself explicitly declared that the US led war on Iraq was illegal, as reported by TheGuardian:

The United Nations secretary general, Kofi Annan, declared explicitly for the first time last night that the US-led war on Iraq was illegal.

Mr Annan said that the invasion was not sanctioned by the UN security council nor in accordance with the UN’s founding charter. In an interview with the BBC World Service broadcast last night, he was asked outright if the war was illegal. He replied: “Yes, if you wish.”

He then added unequivocally: “I have indicated it was not in conformity with the UN charter. From our point of view and from the charter point of view it was illegal.”

Ewen MacAskill and Julian Borger in Washington for The Guardian
Thu 16 Sep 2004 02.28 BST

Here’s a snapshot of the news clip in case the publisher deletes it in the future:

In contrast, Russia’s deNazification efforts in Ukraine pale in comparison to the breadth and cost of the US-led “War of Terror” in Iraq and elsewhere.

The Cost of War study conducted by the Watson Institute of International and Public Affairs summarizes the following:

The objectives of the two wars also differ significantly. One is to preemptively protect its borders from NATO incursions; the other is purely for corporate profit, and outright genocide of people of color.

Moreover, the US wars abroad have produced more disillusioned personnel unwilling to do it over again. In fact, recent military recruitment efforts are hitting a snag.

Every branch of the U.S. military is struggling to meet its fiscal year 2022 recruiting goals, say multiple U.S. military and defense officials, and numbers obtained by NBC News show both a record low percentage of young Americans eligible to serve and an even tinier fraction willing to consider it….

An internal Defense Department survey obtained by NBC News found that only 9% of those young Americans eligible to serve in the military had any inclination to do so, the lowest number since 2007.

The survey sheds light on how both Americans’ view of the military and the growing civilian-military divide may also be factors in slumping recruitment, and how public attitudes could cause recruiting struggles for years to come.

“They think they’re going to be physically or emotionally broken after serving,” said one senior U.S. military official familiar with the recruiting issues, who believes a lack of familiarity with military service contributes to that perception.

Among Americans surveyed by the Pentagon who were in the target age range for recruiting, only 13% had parents who had served in the military, down from approximately 40% in 1995. The military considers parents one of the biggest influencers for service.

The Russian military is fighting for the survival of the Russian Federation., while the US is fighting because it thinks it has a capable military organization that can bring in huge profits for the oil companies, and the mammoth military industrial complex.

Not to mention, the outright plunder of the central banks’ vaults of any targeted country.

A declassified email sent on April 2, 2011 to then Secretary of State Hillary Clinton reveals the invasion of Libya was launched to prevent Muammar Gaddafi from establishing a pan-African currency based on Libya’s gold Dinar.

According to the document posted on the US State Department website advisors to Saif al-Islam Gaddafi, the second son of Muammar Gaddafi, told sources the Libyan government held 143 tons of gold and a similar amount in silver valued at more than $7 billion. The gold and silver was to be used to establish an alternative currency to the French franc for African Francophone countries.

US seizes what may be $500 million in gold in Iraq

WASHINGTON —  American troops have seized what appears to be $500 million worth of gold bars from a truck in Iraq, the U.S. military said Friday.

The 2,000 40-pound bars were seized Thursday at Al Qaim on the Syrian border by soldiers of the 3rd Armored Cavalry Regiment, U.S. Central Command said. It said if the bars are gold they could be worth as much as $500 million, depending on karat weight and purity.

Two occupants of the truck, who were taken into custody, said that they had been paid about $350 to drive the truck to Al Qaim and that they were told the bars were bronze, Central Command said. The person who was supposed to receive the truck was not identified.

Both the seizures of Iraqi and Libyan gold reserves were done when these countries decided to move away from the petrodollar.

Russia, China, India and Iran are moving towards that same direction to insulate their economies from the perpetual US sanctions. That’s the underlying reason why these countries must be wiped out from the map, one by one.

Such is the grand delusion of a dying empire.

We can go ahead and take a deeper dive into how much the US war profiteers have gained in the decades of instituting a “war economy” back home.

But it will just be a gross waste of our time because all that the US veterans of these wars will do is to hang themselves to make a quick exit, instead of collectively taking a definitive action to end the tyranny from within.