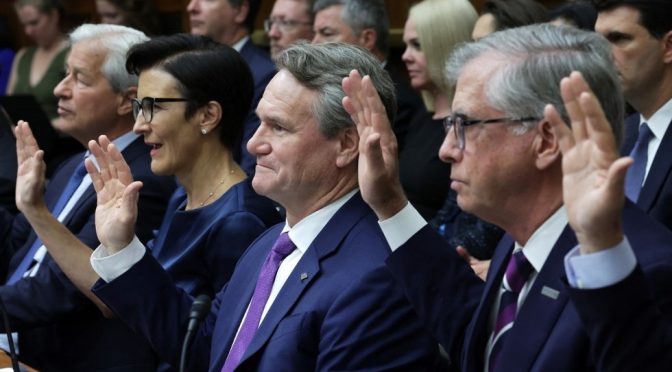 The heads of America’s biggest banks welcomed a Congressional staffer into their ranks during a public hearing.

Despite his role in overseeing the US’ most powerful financial institutions, Indiana Representative Trey Hollingsworth publicly asked Bank of America CEO Brian Moynihan to “take care of” one of his staffers leaving to work at the company. Critics say the exchange highlighted the “revolving door” between Washington and Wall Street.

Speaking at a House Financial Services Committee hearing on Wednesday, in which the heads of the US’ four largest banks were supposed to be grilled on rising inflation and the state of the economy, Hollingsworth asked Moynihan for a favor.

Announcing that one of his aides, Sruthi Prabhu, would leave his office on Monday for a job with Bank of America, Hollingsworth, a Republican, asked Moynihan to “take good care of her and know and recognize the talent she has shown already in our office.”

“We will do that,” Moynihan responded, adding: “Her father already works for us.”

“You should have called us,” quipped another banker, who couldn’t be seen on camera, as the group laughed.

Walter Shaub of the Project on Government Oversight described the scene as “absolutely wild,” adding that “anyone who says Washington’s revolving door isn’t a problem is either lying or hasn’t spent much time with folks working on the Hill.”

“I was in the room when this happened,” Democrat Representative Alexandria Ocasio-Cortez wrote on Twitter, “and it was just as gross and wild in person as it is here.”

The term “revolving door” is not a new one, but the cozy relationship between Washington and Wall Street came under intense scrutiny in the aftermath of the 2008 financial crisis. WikiLeaks revealed in 2016 that Citigroup hand-picked Barack Obama’s cabinet in 2008, and Public Citizen calculated in 2010 that the banking industry had sent more than 1,400 former government employees back to Washington as lobbyists in the two years beforehand.

A businessman before he entered politics, Hollingsworth is the ninth-richest member of Congress. While he spent large sums of his own money to finance his 2016 campaign, he took more than $450,000 in donations from the insurance, securities, banking and credit industries during his 2018 campaign.