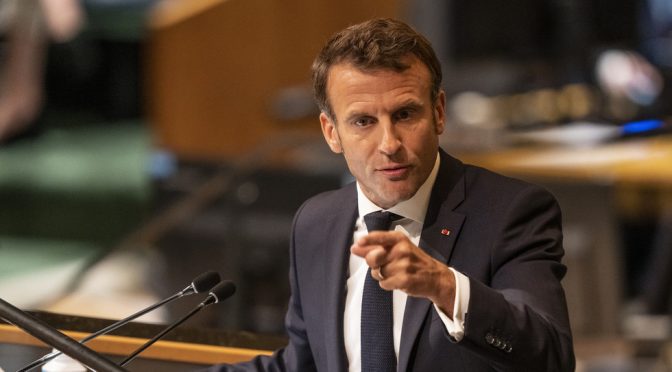 Brussels overlords and assorted EU leaders, taking turns at the UN General Assembly podium beating the Western war-drums against Russia — all in the interest of “peace,” neglect to ascertain what the average European actually wants.

Contrary to their leaders’ desires, the average European is only willing to personally give up so much “for Ukraine” — whatever that means, since it’s pretty obvious that the people of Ukraine aren’t benefiting from the current state of perpetual conflict the EU and the US are enabling, either.

It’s one thing for the average EU citizen to get behind lofty values, voiced from high above the daily struggles if it doesn’t cost them anything. Or at least if the waters are sufficiently muddied that citizens can’t easily connect the dots from their wallet to their leaders’ relentless spending. Selling this seemingly endless conflict in Ukraine, a notoriously corrupt country, as a defense of “democracy,” only works until it means choosing between paying your own bills and paying for all the blank cheques that you’re writing to Kyiv.

In his UN address this week, French President Emmanuel Macron said with respect to countries sitting out the Ukraine conflict that “those who are silent today are serving — whether against their will or secretly with a certain complicity — the cause of a new imperialism.” Macron then paid lip-service to the “feeling of injustice” felt by those paying the price in rising food, energy, and inflation costs.

The message is clear: The average citizen must tolerate these demands foisted on them by Western elites because it’s a moral imperative. Those citizens have heard that all before, with Covid restrictions and climate change regulations. Now it’s come full circle, setting limits on home heating and cooling, but this time “for Ukraine.”

It’s no wonder that Macron is trying to chastise the global South, which has largely opted out of the current fiasco and refused to participate in the Western sanctions on Russia. Nations of the South are actually doing what they figure is best for their own citizens, unlike the EU. Their approach is likely to make their own countries and people more prosperous, which risks being noticed by Europeans as their bills pile up and everyday life becomes increasingly taxing.

So, it makes total sense that Macron and his fellow EU leaders would want everyone in the same sinking boat. If only because it’s tough to argue that Ukraine is a world problem that requires more imperialism disguised as Western-led global governance when a huge swathe of the world isn’t buying into it.

During a visit to Mexico City this week, German President Frank-Walter Steinmeier also tried to browbeat Mexican President Andres Manuel Lopez Obrador into abandoning his non-aligned position and refusal to impose sanctions on Russia. It must be a bad look for Germany that Mexico, having kept out of the fray, is now in a position to offer Germany cooperation on gas  (even if it won’t flow for a few more years), all while Germany is facing deindustrialization, rationing, and has just been forced to nationalize its own gas company, Uniper.

Meanwhile, German Chancellor Olaf Scholz expressed his annoyance that NATO member Turkey was planning to wriggle out of the Western straitjacket and join the Russian and China-led Shanghai Cooperation Organisation, which would effectively allow it to diversify its interests away from the West and therefore reduce its exposure to any pressure.

“I’m very irritated about this development,” Scholz said. “But at the end, it’s important to agree on what is driving us to make clear that the Russian war on Ukraine may not be successful.” In other words, “I don’t like it. But whatever — as long as you’re not abandoning the sinking ship of our Western ideology.”

Scholz should be more concerned with the average Germans who are irritated that he isn’t as keen on ensuring his country’s own energy security as he is on making knee-jerk moves to cut off their own supplies.

Spanish Prime Minister Pedro Sánchez was also working the EU’s blame-shifting rhetoric on the sidelines of the UN assembly this week, telling the press that Russian President Vladimir Putin is using energy as a “war tool” against Europe.

In reality, it’s the European elites, whose policies towards Russia that have stuck their own citizens with the bill, and they now desperately need Europeans to believe that it’s Putin’s fault. But if populist surges in recent elections across the bloc are any indication, resentment is growing towards the EU establishment. If they continue to ignore the will of the people, then they shouldn’t be surprised when it turns out to be at their own political peril.