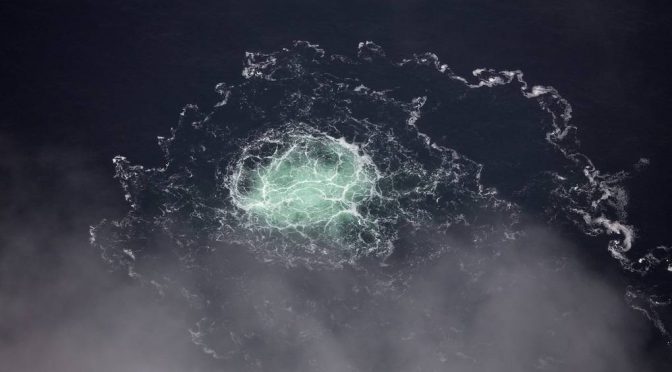 Scientists in Denmark and Sweden registered underwater explosions near the Nord Stream pipelines on Monday, when several major leaks were reported. Sabotage is now believed to be behind the damage.

“There is no doubt that these were explosions,” seismologist Bjorn Lund of Sweden’s National Seismology Centre (SNSN) told public broadcaster SVT on Tuesday.

The Danish military released aerial footage of the leaks, showing large spots and visible bubbling in the water. Nord Stream 1 suffered two leaks northeast of the Danish island of Bornholm, while Nord Stream 2 was damaged south of Dueodde, a beach located at the island’s southernmost tip, the military noted.

This early, Blinken is denying US has something to do with it.

“The leaks are under investigation. There are initial reports indicating that this may be the result of an attack or some kind of sabotage, but these are initial reports and we haven’t confirmed them yet. But if it is confirmed, that’s clearly in no one’s interest,” Blinken said during a joint press conference with Indian External Affairs Minister Dr. Subrahmanyam Jaishankar, who is visiting Washington.

Who sabotaged Nord Stream 1 and 2 pipelines and why?

Last week, Biden pledged that his government will target Russia’s economy over the referenda in Donbass and two Moscow controlled regions.

Biden denounced the referendums on joining Russia, which kicked off on Friday, as “a sham.”

They are “a false pretext to try to annex parts of Ukraine by force in flagrant violation of international law, including the United Nations Charter,” his statement read.

The US leader pledged to “work with our allies and partners to impose additional swift and severe economic costs on Russia,” without providing further details.

Previous to that, Biden was also caught on camera threatening to “stop Nord Stream 2 pipeline if Russia invades Ukraine”, as a preemptive response to NATO’s incursions into Russia’s border.

Biden’s statement was also echoed by the managing coordinator of the Maidan Coup 2014 against the last legitimate government of Ukraine, Victoria “Fuck the EU” Nuland…

.@UnderSecStateP Victoria Nuland: “If Russia invades Ukraine, one way or another, Nord Stream 2 will not move forward.” pic.twitter.com/hEGBrx6HJj

Der Spiegel has come out too that CIA agents told Berlin “weeks ago” that NordStream pipelines will be attacked.

Poland’s former defense and foreign minister Sikorski can’t hide his excitement… and has deleted his “Thank you USA” tweet.

Russia has done both US established redlines and the bombings of NordStream pipelines have happened, obviously as a form of retaliation.

What this means really is that we are now entering yet another stage of the hybrid war that the US ruling elite expects will only be confined in the other side of the Atlantic.

They are too confident that Putin will not bring the war to the US, and the latter’s population are expected to remain apathetic to the ongoing economic recession and high gas prices for as long as the serfs are stupid enough not to arrive at the conclusion, or still in denial, that their suffering is actually self-inflicted, e.g. COVID lockdowns, economic sanctions against Russia, China, Iran and the persistently bloated annual military budget.

As reported, the US became the world’s largest LNG exporter this year, partly due to the embargo against Russia imposed by Washington and its allies. The amount of military aid to Ukraine, i.e. obsolete weaponry dumping, keep rising, too.

The parasitic ruling elite want to keep it all going as planned. These recent events should stop the Germans from protesting against their government for any reopening of NordStream pipelines in time for winter.

Not to worry though, a Norwegian gas pipeline just went online after NordStream was cut off.