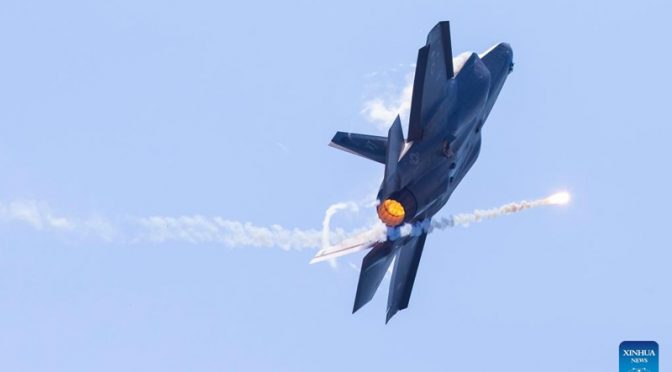 With a waiver allowing alloy of Chinese origins to continue to be used on F-35 fighter jets, the US military has exposed its dependence on Chinese rare-earth products, and China can opt to limit the export of such strategic resources to safeguard its national security, analysts said on Sunday.

Deliveries can resume for Lockheed Martin’s F-35 jet under a waiver allowing Chinese-origin alloy to go into an engine part, Reuters quoted the Pentagon as saying on Saturday.

The Pentagon suspended deliveries of the F-35 fighter jet in September after it discovered the aircraft’s engine manufactured by Honeywell uses a magnet that includes a cobalt and samarium alloy, which does not comply with US procurement laws, according to the report.

With the waiver, the Pentagon will accept all aircraft under the contract, currently projected for October 2023, Reuters reported. “The magnet does not transmit information or harm aircraft, and that there are no security risks involved,” it noted.

An alternative source for the metal will be found and used in the future, the report said, citing the Joint Program Office of the F-35.

The latest waiver again shows the US is dependent on Chinese rare earths, observers said.

China has a leading edge in the middle- to downstream rare-earth magnet production, and the US attempt to remove China-origin alloy imports from military equipment is almost “a mission impossible” from both a short-term and long-term perspective, a manager of a state-owned rare-earth enterprise in Ganzhou, East China’s Jiangxi Province surnamed Yang, told the Global Times on Sunday.

According to Yang, China-made neodymium magnets – another main type of rare-earth magnets that are widely used in electric machinery for a host of electronic products – also represent 85 percent of the global share, another piece of evidence demonstrating China’s overwhelming position in the global rare earth industry.

Research and development as well as production of many advanced weapons and equipment cannot be done without rare earths, Wei Dongxu, a Beijing-based military expert, told the Global Times.

There are other Chinese-origin magnets on the jet that have received waivers from past Pentagon officials, Reuters said. Chinese rare-earth products might also be found on many other US weapons and equipment, analysts said.

With the US using them for military purposes that could harm China’s sovereignty, territorial integrity and development interests, Wei said that China should consider applying more strict export controls on rare-earth products, which are resources of strategic value.

F-35s are deployed in the Asia-Pacific region including in bases in Japan and South Korea and on US aircraft carriers and amphibious assault ships, posing security threats to China with frequent, provocative exercises.

The aircraft’s manufacturer, Lockheed Martin, is also one of the US arms firms sanctioned by China for selling weapons and equipment to the island of Taiwan, a move that seriously violates China’s sovereignty and security interests.