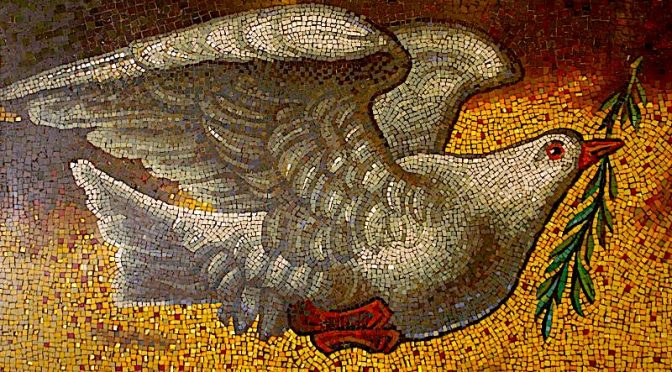 While at first glance, the Ukrainian Center for Civil Liberties might sound like a group that is well deserving of this honor, Ukrainian peace leader Yurii Sheliazhenko wrote a stinging critique.

Sheliazhenko, who heads up the Ukrainian Pacifist Movement and is a board member of the European Bureau for Conscientious Objection, accused the Center for Civil Liberties of embracing the agendas of such problematic international donors as the U.S. Department of State and the National Endowment for Democracy.

The National Endowment for Democracy supports NATO membership for Ukraine; insists that no negotiations with Russia are possible and shames those who seek compromise; wants the West to impose a dangerous no-fly zone; says that only Russian President Vladimir Putin violates human rights in Ukraine; never criticizes the Ukrainian government for suppressing pro-Russian media, parties, and public figures; never criticizes the Ukrainian army for war crimes and human rights violations, and refuses to stand up for the human right, recognized under international law, to conscientious objection to military service.

Supporting conscientious objectors is the role of Sheliazhenko and his organization, the Ukrainian Pacifist Movement (UPM). While we hear a lot about Russian war resisters, as Sheliazhenko points out even inside Ukraine, which is portrayed in Western media as a country entirely united in its war with Russia, there are men who don’t want to fight.

The Ukrainian Pacifist Movement was founded in 2019 when fighting in the separatist-ruled Donbas region was at a peak and Ukraine was forcing its citizens to participate in the civil war. According to Sheliazhenko, Ukrainian men were “being given military summonses off of the streets, out of night clubs and dormitories, or snatched for military service for minor infractions such as traffic violations, public drunkenness, or casual rudeness to police officers.”

To make matters worse, when Russia invaded in February 2022, Ukraine suspended its citizens’ right to conscientious objection and forbade men between the ages of 18 and 60 from leaving the country; nevertheless, since February, over 100,000 Ukrainian draft-eligible men managed to flee instead of fight. It’s estimated that several thousand more have been detained while trying to escape.

International human rights law affirms peoples’ right, due to principled conviction, to refuse to participate in military conflict and conscientious objection has a long and rich history. In 1914, a group of Christians in Europe, hoping to avert the impending war, formed the International Fellowship of Reconciliation to support conscientious objectors. When the U.S. joined WWI, social reformer and women’s rights activist Jane Addams protested.

She was harshly criticized at the time but, in 1931, she became the first American woman to win the Nobel Peace Prize.

In Russia, hundreds of thousands of young men are refusing to fight. According to a source inside Russia’s Federal Security Service, within three days of Russia’s announcement that it was calling up 300,000 reservists, 261,000 men fled the country. Those who could booked flights; others drove, bicycled, and walked across the border.

Belarusians have also joined the exodus. According to estimates by Connection e.V., a European organization that supports conscientious objectors and deserters, an estimated 22,000 draft-eligible Belarusians have fled their country since the war began.

The Russian organization Kovcheg, or The Ark, helps Russians fleeing because of anti-war positions, condemnation of Russia’s military aggression against Ukraine, and/or persecution they are experiencing in Russia.

In Belarus, the organization Nash Dom runs a “NO means NO” campaign to encourage draft-eligible Belarusians not to fight.

Despite refusing to fight being a noble and courageous act for peace — the penalty in Russia for refusing the draft is up to 10 years in prison and in Ukraine, it is at least up to three years, and likely much higher, with hearings and verdicts closed to the public — neither Kovcheg, Nash Dom nor the Ukrainian Pacifist Movement, were announced as Nobel Peace Prize winners.

The U.S. government nominally supports Russia’s war resisters. On Sept. 27, White House press secretary Karine Jean-Pierre declared that Russians fleeing Putin’s call up were “welcome” in the U.S. and encouraged them to apply for asylum.

But as far back as last October, before Russia invaded Ukraine, amid tit-for-tat U.S.-Russia tensions, Washington announced it would henceforth only issue visas to Russians through the U.S. Embassy in Warsaw, 750 miles away from Moscow.

To put a further damper on Russian hopes of refuge in the U.S., on the same day as the White House held its press conference where it encouraged draft-eligible Russians to seek U.S. asylum, the Biden administration announced that it would be continuing into fiscal year 2023 its FY2022 global refugee cap of 125,000.

You would think that those resisting this war would be able to find refuge in European countries, as Americans fleeing the Vietnam war did in Canada.

Indeed, when the Ukraine war was in its early stages, European Council President Charles Michel called on Russian soldiers to desert, promising them protection under EU refugee law. But in August, Ukrainian President Volodymyr Zelensky asked his Western allies to reject all Russian emigres. Currently, all non-visa travel from Russia to E.U. countries is suspended.

As Russian men fled after Putin’s announcement, Latvia closed its border with Russia and Finland said it was likely going to be tightening its visa policy for Russians.

Had the Nobel Peace Prize awardees been the Russian, Ukrainian, and Belarusian organizations that are supporting war resisters and peacemakers, it would have drawn global attention to the courageous young men taking this stand and perhaps opened more avenues for them to get asylum abroad.

It could have also initiated a much-needed conversation about how the U.S. is supplying Ukraine with an endless flow of weapons but not pushing for negotiations to end a war so dangerous that President Joe Biden is warning of “nuclear Armageddon.”

It certainly would have been more in line with Alfred Nobel’s desire to bring global recognition to those who have “done the most or best to advance fellowship among nations and the abolition or reduction of standing armies.”

Medea Benjamin, co-founder of Global Exchange and CODEPINK: Women for Peace, is the author of the 2018 book, Inside Iran: The Real History and Politics of the Islamic Republic of Iran. Her previous books include: Kingdom of the Unjust: Behind the U.S.-Saudi Connection(2016); Drone Warfare: Killing by Remote Control” (2013); Don’t Be Afraid Gringo: A Honduran Woman Speaks from the Heart (1989), and (with Jodie Evans) Stop the Next War Now (Inner Ocean Action Guide) (2005).

Ariel Gold is the executive director of the Fellowship of Reconciliation – USA, the oldest peace and justice organization in the U.S. Previously, she was the national co-director of CODEPINK, where she helped manage the Peace in Ukraine coalition.