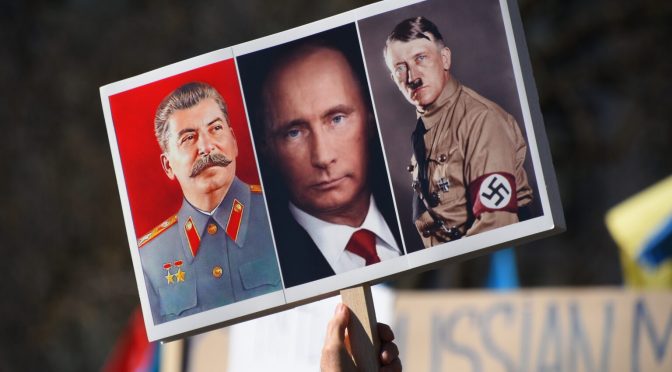 An entire globe-spanning empire rests on our closed eyelids. It depends on keeping us in a propaganda-induced coma.

We’re being driven toward nuclear war on the completely fictional claim that Russian President Vladimir Putin is a Hitler-like megalomaniac who’s just invading countries completely unprovoked, solely because he is evil and hates freedom and won’t stop invading and conquering until he’s stopped by force.

The news media aren’t telling people about the Western aggressions which led to this war. They’re not telling people the U.S. is keeping this war going with the stated goal of weakening Russia and is rejecting peace talks and refusing to push for peace.

All people are being told is that Putin is another Hitler who won’t listen to reason and only understands violence. The world’s two nuclear superpowers are being pushed closer and closer to direct military confrontation based on a complete fiction which omits mountains of facts.

To participate in this madness is indefensible. It is indefensibly immoral to foist a fictional version of events upon a trusting populace in order to manufacture consent for more and more aggressive acts of brinkmanship with a nuclear superpower. These people are depraved.

“No no you don’t understand, if we weren’t being told constantly by the media that this proxy war needs our full support and censoring the voices who dispute this and using giant troll armies to swarm and silence anyone who questions this, we might fall victim to propaganda.”

Calling this deranged nonsense “anti-war” is giving it way too much credit. https://t.co/mZ4jUiSrU9

They very much prefer to pretend that this time the U.S. is on the good and righteous side of a war, because in that imaginary world they’re the cool anti-fascists standing up to an evil tyrant and those who oppose their warmongering are the real warmongers.

The closer we get to nuclear war the less patience I have for sectarian spats between people who are supposed to be opposing war and militarism. Grow up and get over yourselves. This is more important than you and your ego.

Don’t let anyone tell you your criticisms of U.S. warmongering make no difference; if they didn’t, the empire wouldn’t work so hard to dissuade you from making them. They work so hard to manufacture public consent for their agendas because they absolutely require that consent.

An entire globe-spanning empire rests on our closed eyelids. Depends on keeping us in a propaganda-induced coma. Circulating ideas and information which discredit and dispute that propaganda poses a direct threat to that empire. That’s what all the censorship of dissent is about.

Is your one tweet, video or public demonstration going to bring the empire crashing down? Of course not. But it will spread awareness by that much. And all positive changes in human behavior are always preceded by an expansion of awareness. You’re nudging us all toward awakening to whatever extent you help expand awareness of truth and reality.

We can’t be the Hollywood hero who single-handedly decapitates the machine, but we can all collectively throw sand in its gears, making it harder and harder for it to function. That’s what disrupting the imperial propaganda machine accomplishes, because that machine depends on propaganda.

The weakest part of an empire that’s held together by lies and manipulation is its lies and manipulations; that’s why it’s such an aggressively protected aspect of its power. And it happens to be the one part that anyone with a voice can attack, and attack effectively.

One aspect of this struggle that is a bit like a Hollywood movie is that it kind of is a struggle between light and darkness, because the empire depends on keeping its activities obfuscated and unseen while we’re all working to make its machinery visible and transparent.

That’s why Julian Assange is in prison.

It’s also why internet censorship keeps ramping up, why propaganda is getting more and more blatant, and why online discussion is swarmed by astroturf trolling ops. Those in power are working against the people to keep things dark and unseen.

Caitlin Johnstone’s work is entirely reader-supported, so if you enjoyed this piece please consider sharing it around, following her on Facebook, Twitter, Soundcloud or YouTube, or throwing some money into her tip jar on Ko-fi, Patreon or Paypal. All works are co-authored with her American husband Tim Foley.