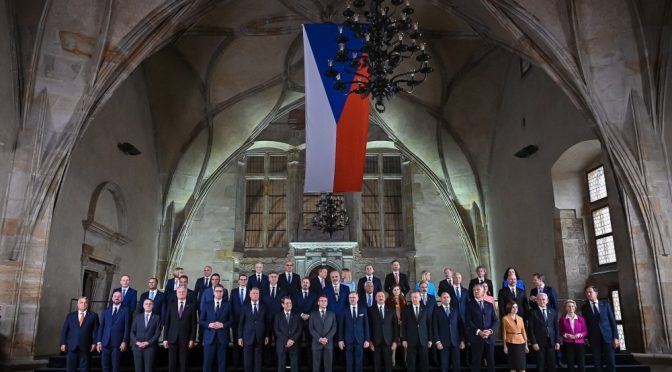 Since the beginning of the Russian military operation in Ukraine, international relations are blocked. No position changes. President Macron thought he could change the rules of the game by reshuffling the cards on the occasion of a meeting of the European enemy brothers, the European Political Community. But President Putin took him by surprise by changing the borders and the game itself.

French President Emmanuel Macron does not know how to solve crises, but to reshuffle the cards in order to consider new solutions. This is why, noting the absence of discussion around the Ukrainian conflict, he launched an initiative last May: the “European Political Community” (EPC).

After François Mitterrand’s “European Confederation” and Nicolas Sarkozy’s “Union for the Mediterranean”, the Élysée Palace has tried to convince its partners of the usefulness of a new “thing”. Incidentally, France often varies: the Mitterrand Confederation advocated the alliance of West and East, of Brussels and Moscow, the Macronist Community aims, on the contrary, to oppose them.

France, which presided over the European Council during the first half of 2022, logically sought the permanent president of this structure, the former Belgian Prime Minister Charles Michel. He eagerly stepped into the breach. He thought he could rally around the EU and carve out a role for himself at the expense of the Commission President, his rival Ursula von der Leyen. Patiently the French diplomats put him in his place so that he was not even on the stage at the final press conference. As for Mrs. von der Leyen, she was invited only for formality.

The EPC was prepared with EU resources, but not on behalf of the EU. The preparatory meetings were not held on the premises of the Union, but at the Belgian castle of Val Duchesse. This was inevitable if the United Kingdom and Turkey were to be involved. London, post-Brexit, still does not want a supra-national structure, and Ankara has been stalling at the EU door for so long that it does not want to be led astray on yet another sideline. The United Kingdom has even quibbled about the title “European Political Community”, which reminds it too much of the defunct “European Economic Community”, the forerunner of the “European Union”. Turkey, for its part, demanded assurances that its participation in the EPC would not be just another distraction to keep it waiting.

In the end, 44 states participated in the forum, that is, all Europeans except Russia and Belarus, which are clearly the designated enemies. Unfortunately, it took six months to prepare this meeting, which came a little late. When it was prepared, the idea was to ally the continent against the eternally evil Russians who had invaded the young Ukrainian democracy. Of course, some states did not see it that way. Turkey was careful to place itself in the middle, between its Ukrainian and Western allies on one side and its Russian ally on the other. Or Serbia, which, like Turkey, refused to apply the anti-Russian sanctions without even hiding its Russophilia. Within the EU, Austria and especially Hungary loudly demonstrated their friendship with Moscow, while paying lip service to the same discourse as the others. But then, at the last moment, President Vladimir Putin played a trump card by mobilizing 300,000 veterans and by having four Ukrainian oblates join the Russian Federation. In doing so, he has upset the game, much more than Emmanuel Macron, who has only attacked the rules of the game.

Indeed, if Nato continues its arms transfers, it will no longer attack the unrecognized republics of the Donbass and the uninvited Russian army in Ukraine, but it will attack the Russian Federation directly by attacking its own territory. Thirty years ago, the British were convinced that Crimea, Novorossia and Donbass were Russian. Calling their annexation “annexation” will not change the reality.

By attacking again, Nato will trample on the right of peoples to self-determination that justifies the independence of these regions and their free accession to the “Motherland”. For all the former colonized states, it will appear for what it is: a coalition of revanchists desperately trying to save its age-old domination of the world.

On the other hand, if NATO decides to stop there, its leaders, who have never stopped shouting that they defend peace and justice, will appear as “paper tigers” according to the formula of Mao Zedong. Everyone will conclude that the era of their domination is over.

The meeting was opened by the very russophobic Czech Prime Minister, Petr Fiala, who immediately set the anti-Putin tone – propaganda always personalizes the policies of the session states. True to form, the inevitable Ukrainian president, actor Volodymyr Zelensky, intervened by video and announced that Russian tanks would soon “march on Prague [the meeting venue] and on Warsaw” (sic). The audience was stoic, content to applaud politely, without warmth.

The meetings on the sidelines of the summit were almost all failures, with the exception of the Armenian-Azerbaijani summit, which started coldly but went on into the evening.

The thematic sessions allowed to know what everyone thought about the substance. After the sabotage of the NordStream gas pipelines, the idea of protecting the common infrastructure was raised, although it was not clear whether this was only a concern or also a denunciation of US suzerainty. The terrorist action against the Crimean bridge had not yet taken place. Behind the scenes, all agreed to salute the exploits of the US Special Forces, but wondered how far Washington would go.

No joint statement was planned at the end of the meeting and none would have been possible. A schedule for the next meetings of this forum was agreed upon, in six months in Moldova, next year in Spain, and then in the UK. No one is sure why he would participate, or even if it will still exist.

Chase away what is natural, it will come back to you. The meeting was covered by Eurovision, a structure created by NATO in the 1950s, which awarded Ukraine its last song contest. An informal meeting of the European Council followed that of the European Political Community. The 27 drew conclusions from this talkative and useless assembly.

One thought on “The European Political Community : A Sword Striking Water”