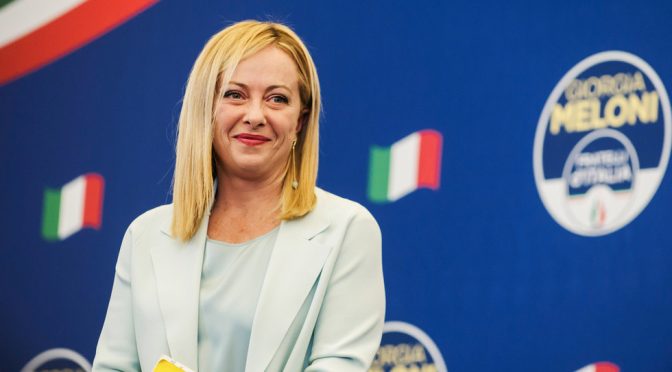 Brussels stands ready to use its ‘tools’ should right-wing Georgia Meloni step out of line, but it’s far from the only element of discord plaguing the European Union.

The new “EU Political Community”, an invention of French President Emmanuel Macron consisting of the 27-nation bloc and 17 other countries, most of which aspire to join the EU, recently wrapped up its inaugural PR exercise in Prague. The whole point of this event at Prague Castle seemed to be to convince onlookers of European unity, particularly in favor of Ukraine and against Russia, while papering over any other cracks in the solidarity façade.

All eyes have been on the newest addition to the class: Italian prime minister-elect Georgia Meloni. Her right-wing populist coalition had just been elected and already the knives were out. Actually, they were out even before the election, as European Commission President Ursula von der Leyen warned, in response to a query about the far right being on the cusp of power in Italy, that the bloc had “tools” to deal with member states whose governments drifted away from Brussels’ agenda.

So despite von der Leyen and other EU leaders’ ridiculous claims of fighting for democracy in notoriously corrupt Ukraine, apparently by flooding it with endless Western weapons, von der Leyen can’t even bother to pay lip service to the most basic respect of the democratic will of the citizens of Italy.

In line with von der Leyen, French European Affairs Minister Laurence Boone said in an interview with Italian newspaper, La Repubblica: “We want to work with Rome but we will monitor respect for rights and freedoms,” adding that “we will pay close attention to respect of values and the rule of law. The EU has already shown that it is vigilant toward other countries such as Hungary and Poland.” It sure did.

Notably by withholding funds from countries that don’t fall in line. The ostensible motive is that these countries lag in the “democratic values” department. That is, in the specific way that EU defines democracy to serve the interests of the Western economic and political establishment, which often diverge from those of the average citizen.

Meloni subsequently commented that the French minister’s words “resemble too much of an unacceptable threat of interference against a sovereign state and a member of the European Union,” and said she hoped the “leftist press” had “misrepresented” Boone’s comments. But they indeed resemble exactly the kind of anti-democratic talk that’s often on the tongues of bloc’s officials.

German foreign minister Annalena Baerbock said recently at a democracy conference in Prague that she was personally intent on delivering for Ukraine, “no matter what my German voters think,” despite paying lip service to her solidarity with the German people facing an energy crisis as a direct result of German and EU sanctions policies.

So not only are there internal EU divisions festering between average citizens and the top-down policies imposed on them and their governments by Brussels like a Made In Europe straitjacket, but there’s also no shortage of divisions between member states.

The bloc’s current members can’t even get along, and already Brussels has set up a whole new structure in a bid to bring in more players with this new summit. Turkish President Erdogan used his platform to lash out at Greece over their territorial disputes in the region, accusing the EU of supporting illegal initiatives masquerading as unity or solidarity.

The whole bloc is upset with Norway for maintaining high energy prices and profits amid the gas crunch caused by Brussels’ auto-sanctions. German economy minister Robert Habeck brought up the issue of so-called friends like the US and Norway exploiting other EU countries’ desperation through price gouging.

French President Macron used his summit platform to repeat his opposition to building a new gas pipeline between Spain and France, which Germany really wants, because it would allow cheap gas from North Africa to flow into neighboring countries. But let’s face it – France would lose a market in the long run if it supported the project, given its interest in exporting nuclear energy, particularly now that the EU considers it “green” as of earlier this year. There’s even dissent on this reclassification too, as Austria is now pushing back against the designation by suing EU brass.

New UK Prime Minister Liz Truss was also in attendance at the summit and made a point of calling Macron a friend, even though just weeks ago she said that the jury was out on whether he’s a friend or foe for Britain.

The Polish prime minister didn’t miss the opportunity to pick yet another fight with Germany, this time over subsidizing its industry amid the EU sanctions-induced energy crisis while industry in other EU countries suffer under the bloc’s pro-Ukraine policies (which Poland ironically supports because it’s anti-Russian). Poland also decided recently to demand reparations from Germany for World War 2. And now Greece is also seeking hundreds of billions of euros from Germany for both World Wars 1 and 2.

Guess it doesn’t matter that Germany has been doing the heavy lifting for both of these net recipients of EU funds as the bloc’s primary economic engine. And now Berlin, which is staring down the barrel of deindustrialization and rationing because of EU energy sanctions, isn’t exactly in the best position right now to be stuck with bills to pay to right historical wrongs.

Victor Orban, the prime minister of the EU’s perennial pariah, Hungary, took issue with Brussels directly. “The Brussels bureaucrats and the European elites decided on the sanctions, nobody asked the European people,” Orban said in his summit address as Budapest goes its own way, ignoring the bloc’s sanctions in favor of new energy deals with Moscow.

So despite all the smiles and backslapping in images from the summit, Ukraine is arguably the least of the EU’s worries as it merely underscores long-festering problems.

Not that you’re supposed to notice, as they demand your undivided support and focus on sticking it to Putin.