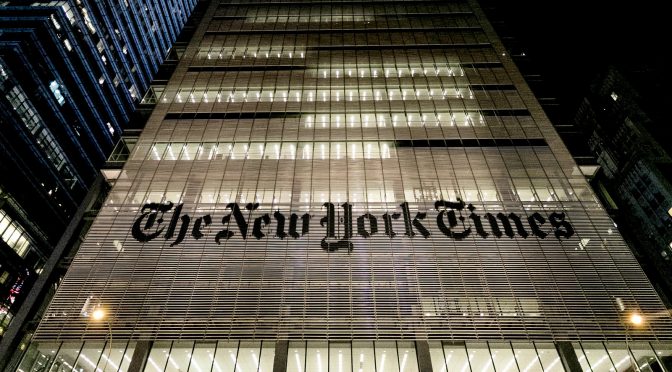 The New York Times loves a good Nazi. And I don’t just mean this past year. I mean, going back to World War II to the OG Nazis, the guy with the mustache. If any of you out there are still New York Times lovers; then you really shouldn’t watch this episode. Just go back to playing with your Legos or something.

Back in 2019, an Australian white supremacist murdered 49 people in New Zealand. As discussed this week by Fairness And Accuracy in Reporting, at the time, the New York Times correctly reported that “On his flak jacket was a symbol commonly used by the Azov Battalion, a Ukrainian neo-Nazi paramilitary organization….” So, at least in 2019, the New York Times was opposed to Neo-Nazis. How good of them!

Yet, that has very much changed this year. Just last week, the New York Times wrote of that same neo-Nazi organization: “Commanders of Ukraine’s celebrated Azov Battalion have held an emotional reunion with their families in Turkey, Ukrainian officials said, honoring the fighters released from Russian confinement last month….”

What a touching reunion the Times is heralding for their beloved Nazis. The welcome home cake probably had a swastika made of marzipan. Maybe they had a pinata shaped like Martin Luther King jr. or something.

And by the way, in case this needs to be said again: You can be against the Russian invasion, against the US/NATO proxy war, and against Ukrainian Nazis. You can be against all of those things at once because you’re an adult with a functioning brain, one hopes. At least, if you’re an American, then there’s a 35 percent chance you’re intelligent and thoughtful.

But the New York Times – one of the most important papers in the world – has celebrated these Nazis over the past several months. Reporting things like, “Some of the [mobilization] activity appears to be centered on the Azov Battalion, a unit of the Ukrainian National Guard that has drawn far-right fighters from around the world…” and the Azov messages, “…pointed volunteers toward recruitment resources online.”

The New York Times is practically serving as an advertisement for neo-Nazi recruits. I’m surprised they didn’t end the article with a link to the Azov website and Tinder account.

But what’s even scarier is the New York Times’ friendliness with Nazis didn’t start this year. It goes back generations.

In the lead-up to World War II, after the world had witnessed the racist, fascist spectacle that was Hitler’s 1936 Berlin Olympics, where thousands gave the Nazi salute and the streets were lined with swastikas, the New York Times wrote, “Perfect in setting, brilliant in presentation and unparalleled in performance, the Olympic Games of 1936 stand apart in history as the greatest sports event of all time.”

And it wasn’t like Hitler’s antisemitism was a secret at that point. The 1936 Olympics were a year after Hitler had already stripped Jews of citizenship and forbade them from entering most professions.

Throughout their entire review of the games, the New York Times left out one word that many might view as moderately important – the word Nazi! That’s like going to a white supremacist bowling league event and just telling people, “it was one of the best bowling experiences of my life.” I feel like you’re burying the lede!

Watch the full report below.

Feature photo | A sign for The New York Times hangs above the entrance to its building, May 6, 2021 in New York. Mark Lennihan | AP

Lee Camp is an American stand-up comedian, writer, actor and activist. Camp is the host of Behind The Headlines’ new series: The Most Censored News With Lee Camp. He is a former comedy writer for the Onion and the Huffington Post and has been a touring stand-up comic for 20 years.