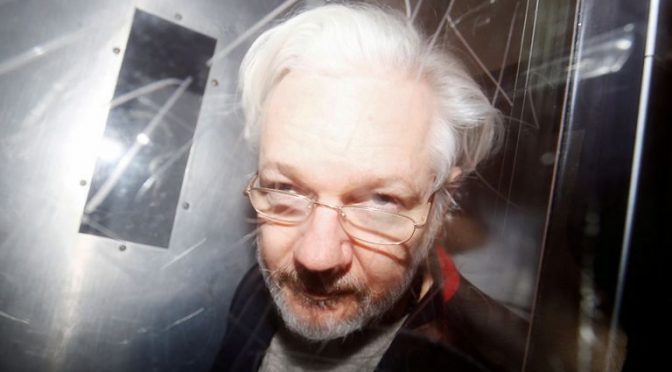 Jennifer Robinson, an attorney for imprisoned  WikiLeaks publisher Julian Assange, told an event at the Australian National Press Club in Canberra that the future is “very dark” for Assange. CN was there to cover it.

WATCH: ‘Don’t Know How Long He Will Last’: Assange Lawyer

Back in 2017, before Julian had been indicted by the U.S, a congressman came to visit Julian in the Ecuadorian Embassy. He came to offer Julian a political deal. I had been asked by Julian to attend and observe that meeting, and I later gave evidence about it at the extradition hearing. This was at the height of the Mueller investigation about Russian interference in the U.S election in 2016.

President Trump was then a subject of that investigation. Julian had already made clear publicly that the Wikileaks publications in the context of the 2016 election had not come from a government source, but Trump clearly wanted to know more.

Congressman Dana Rohrabacher made clear on his visit that President Trump was aware of and had approved of him coming to make this proposal. It was what he called a win-win solution that would allow Julian to get on with his life.

Julian was asked to identify the source, his source for the 2016 publications, which the congressman explained would solve president Trump’s problems and put an end the Mueller investigation. In return Julian would receive a pardon, or some form of protection that he would not be extradited to the United States, and of course Julian refused to identify his source.

A Publisher’s promise to their sources is Solemn as many of you in this room will know even if that promise carries a cost. Trump, too, made good on his promise. He and his administration indicted Julian after he refused to name that source.

Julian has had many other opportunities to put himself and his own interest above the interests of democracy and free speech, and he has always put himself second, and the result is an indictment against him, which threatens free speech and democracy, the freedom of the press.

The Foundation calls this prosecution the most terrifying threat to freedom of speech in the 21st century and this is no exaggeration. One of the 18 charges relates to taking measures to protect the identity of a source. The remaining 17 charges are all brought under the Espionage Act, and they relate to receiving and publishing information.

There is no public interest defense to charges under the Espionage Act and around the world the media has responded. The Guardian, the New York Times, The Washington Post, have all made clear their concern about this prosecution, and the fact that it is criminalizing public interest journalistic practices that they employ every day, as the president of the International Federation of journalists herself said just this week,

“If Assange is jailed in the U.S there is not a journalist on Earth who will be safe.”

And she is right

If Julian is extradited, the precedent means that any journalist, or editor, anywhere in the world who published truthful information about the United States, could face extradition and prosecution for committing acts of Journalism.