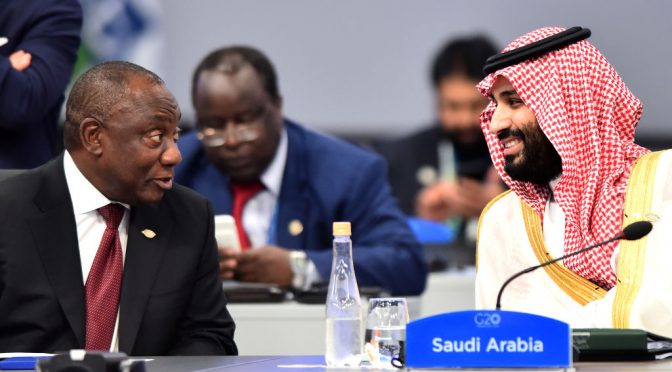 Saudi Arabia expressed interest in being part of the BRICS economic bloc as it pivots away from Washington. Conversations with the alternative counter-western alliance representative, South African President Cyril Ramaphosa, started the ball rolling.

KSA Reorients Itself From the US

President Ramaphosa informed reporters in Riyadh of the inquiry when his two-day state visit to the Kingdom of Saudi Arabia was winding down last Sunday, reported The Daily Telegraph.

The South African leader met with Crown Prince Mohammed bin Salman and other leaders. He added that the crown prince wanted to be part of the BRICS alliance, with more interested possible members. Its name comes from its members like Brazil, Russia, India, China, and South Africa; next year, a summit in Johannesburg is scheduled.

Expansion possibilities would likely be prominent on the agenda, as the alliance is predicted to consider introducing nations such as Saudi Arabia, Turkey, Egypt, and Algeria, noted RT.

Ramaphosa stressed that the matter would be addressed when the alternative bloc meets at a meeting in 2023 that South Africa will chair.

Additionally, several states or countries have been seeking the other member nations and have responded to them with the same answer. A decision will be taken after five BRICS partners meet to discuss it.

One of the reasons for Johannesburg and Saudi Arabia meeting was a reaction to the unruly reaction of the Biden administration after its alleged request to cancel the oil cut until after the midterm elections were snubbed.

When the US heard OPEC+ lessened production by two million barrels, a row with Washington began. US President Joe Biden was livid at the snub and rebuke, then threatened consequences for choosing Russia. US legislators have also started calling for slashing collaboration with KSA, like stopping weapons sales or drawing down military aid.

One of the Saudi leaders, Saudi Prince Saud al-Shaalan, would not take abuse from the Western alliance or the White House outbursts as justification to threaten the country. He continued by saying that anyone who dared criticize their nation or its kingdom was a jihad project who did not fear martyrdom. It was Prince Saud’s message to the United States and its friends.

Khalid bin Salman, the defense minister of KSA, and other Saudi officials were stunned by the Biden White House’s outrageous claims that Riyadh is hostile to the West and Ukraine, citing News7D.

Saudis want a way out of the petrodollar that will weaken the US forever The alternative bloc, led by the superpowers Russia and China, is working to create a new global reserve currency that will compete with and replace the US dollar’s hegemony.

The inception of the Kingdom of Saudi Arabia will be a game changer that will rock the dollar; if the US currency gets ejected from international oil markets, that will snowball Washington so much in future oil transactions.

One surprise move of the kingdom is to strike out and sell crude oil in the Chinese yuan as an alternative currency. A breakup means the US loses a major buyer of American arms and wants cheap oil to the detriment of its producers.

Saudi Arabia and its big move to join the BRICS will benefit it and Moscow, which signals the sunset of the US in the Middle East.