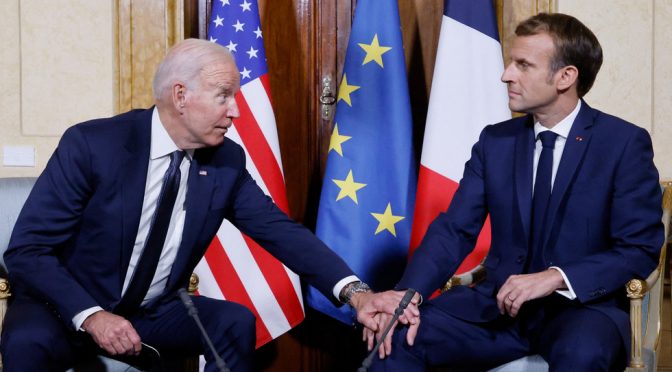 Intelligence services worry about American economic warfare more than terrorism or the prospect of confrontation with Russia or China.

New research published by France’s Ecole de Guerre Economique has revealed some extraordinary findings about who and what the French intelligence services fear most when it comes to threats to the country’s economy.

The findings are based on extensive research and interviews with French intelligence experts, including representatives of spy agencies, and so reflect the positions and thinking of specialists in the under-researched field of economic warfare. Their collective view is very clear – 97 percent consider the US to be the foreign power that “most threatens” the “economic interests” of Paris.

Who is your true enemy?

The research was conducted to answer the question, “what will become of France in an increasingly exacerbated context of economic war?”.

This query has become increasingly urgent for the EU as Western sanctions on Moscow’s exports, in particular energy, have had a catastrophic effect on European countries, but have not had the predicted effect in Russia. Nor have they hurt the US, the country pushing most aggressively for these measures.

Yet, the question is not being asked in other EU capitals. It is precisely the continent-wide failure, or unwillingness at least, to consider the “negative repercussions on the daily lives” of European citizens that inspired the Ecole de Guerre Economique report.

As the report’s lead author Christian Harbulot explains, ever since the end of World War II, France has “lived in a state of the unspoken,” as have other European countries.

At the conclusion of that conflict, “manifest fear” among French elites of the Communist Party taking power in France “strongly incited a part of the political class to place our security in the hands of the US, in particular by calling for the establishment of permanent military bases in France.”

“It goes without saying that everything has its price. The compensation for this aid from across the Atlantic was to make us enter into a state of global dependence – monetary, financial, technological – with regard to the US,” Harbulot says.

And aside from 1958 – 1965 when General Charles de Gaulle attempted to increase the autonomy of Paris from Washington and NATO, French leaders have “fallen into line.”

This acceptance means aside from rare public scandals such as the sale of French assets to US companies, or Australia canceling its purchase of French-made submarines in favor of a controversial deal with the US and UK (AUKUS), there is little recognition – let alone discussion – in the mainstream as to how Washington exerts a significant degree of control over France’s economy, and therefore politics.

As a result, politicians and the public alike struggle to identify “who their enemy” truly is. “In spheres of power” across Europe, Harbulot says, “it is customary to keep this kind of problem silent,” and economic warfare remains an “underground confrontation which precedes, accompanies and then takes over from classic military conflicts.”

This in turn means any debate about “hostility or harmfulness” in Europe’s relations with Washington misses the underlying point that “the US seeks to ensure its supremacy over the world, without displaying itself as a traditional empire.”

The EU might have a trade surplus of 150 billion euros with the US, but the latter would never willingly allow this economic advantage to translate to “strategic autonomy” from it. And this gain is achieved against the constant backdrop of – and more than offset by – “strong geopolitical and military pressure” from the US at all times.

I spy with my Five Eyes

Harbulot believes the “state of the unspoken” to be even more pronounced in Germany, as Berlin “seeks to establish a new form of supremacy within Europe” based on its dependency on the US.

As France “is not in a phase of power building but rather in a search to preserve its power” – a “very different” state of affairs – this should mean the French can more easily recognize and admit to toxic dependency on Washington, and see it as a problem that must be resolved.

It is certainly hard to imagine such an illuminating and honest report being produced by a Berlin-based academic institute, despite the country being the most badly affected by anti-Russian sanctions. Some analysts have spoken of a possible deindustrialization of Germany, as its inability to power energy-intensive economic sectors has destroyed its 30-year-long trade surplus – maybe forever.

But aside from France’s “dependency” on Washington being different to that of Germany, Paris has other reasons for cultivating a “culture of economic combat,” and keeping very close track of the “foreign interests” that are harming the country’s economy and companies.

A US National Security Agency spying order sent to other members of the Five Eyes global spying network – Australia, Canada, New Zealand, and the UK – released by WikiLeaks, shows that since at least 2002 Washington has issued its English-speaking allies annual “information need” requests, seeking any and all information they can dig up on the economic activities of French companies, the economic and trade policies of France’s government, and the views of Paris on the yearly G8 and G20 summits.

Whatever is unearthed is shared with key US economic decision-makers and departments, including the Federal Reserve and Treasury, as well as intelligence agencies, such as the CIA. Another classified WikiLeaks release shows that the latter – between November 2011 and July 2012 – employed spies from across the Five Eyes (OREA) to infiltrate and monitor the campaigns of parties and candidates in France’s presidential election.

Washington was particularly worried about a Socialist Party victory, and so sought information on a variety of topics,

“to prepare key US policymakers for the post-election French political landscape and the potential impact on US-France relations.” Of particular interest was “the presidential candidates’ views on the French economy, what current economic policies…they see as not working, and what policies…they promote to help boost France’s economic growth prospects[.]”

The CIA was also very interested in the “views and characterization” of the US on the part of presidential candidates, and any efforts by them and the parties they represented to “reach out to leaders of other countries,” including some of the states that form the Five Eyes network itself.

Naturally, those members would be unaware that their friends in Washington, and other Five Eyes capitals, would be spying on them while they spied on France.

It was clearly not for nothing that veteran US grand strategist and former Secretary of State Henry Kissinger once remarked, “to be an enemy of America can be dangerous, but to be a friend is fatal.”