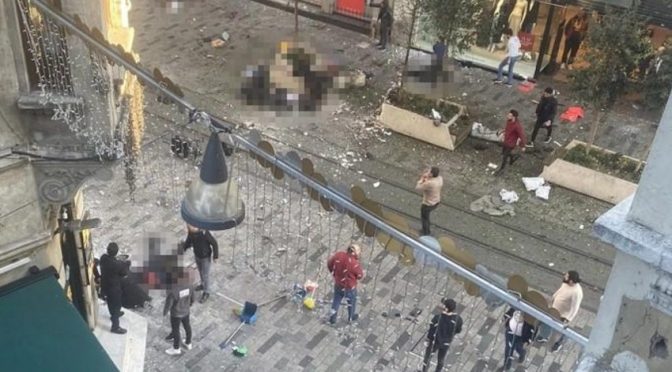 The road to peace in Syria and the rebuilding of lives and homes there can only be done with the help of neighbors.

The Syrian air force targeted positions of HTS and destroyed a drone factory in the suburbs of Idlib. This attack was in response to an earlier HTS attack on the suburbs of Latakia causing the deaths of SAA soldiers including, Mohammed al-Sharaa, Mohammed al-Atiyah, and Jafar Ibrahim.

Idlib is the last terrorist occupied area in Syria, with many different terrorist groups present, ranging from the Turkish backed terrorists to those formerly supported by the U.S.-NATO attack on Syria which began in 2011. Some of the 3 million people have attempted to leave, but were prevented by the terrorists, who hold civilians as human shields, benefitting from the humanitarian aid being delivered to support the civilians.

All the various terrorist groups have one common denominator: they all follow a political ideology known as Radical Islam, which French President Macron has declared war on in France.  Al Qaeda came to light after September 11, 2001, and since then many other terrorist groups have arrived on the international stage: such as Free Syrian Army (FSA), HTS, and culminating in Islamic State (IS).

A truce was reached in March 2020 between Turkey and Russia concerning the security in Idlib. Turkey had promised to guarantee the safety of the M4 highway, which links the port of Latakia with the industrial city of Aleppo. Turkey had promised to reign in the terrorist groups they support in Idlib, but never fulfilled the agreement. The M4 remains closed to commercial and civilian traffic because of terrorist attacks on any movement on the highway.

In the agreement with Turkey, it was stipulated that Russia and Syria would continue to fulfill their UN mandated policy of identifying and targeting any Al Qaeda, or related terrorists, including IS. It was Turkey’s responsibility to remove civilians from terrorist outposts and weapons storage areas.

HTS responded to the attack by targeting SAA positions with military and missiles in the area of Saraqib, which had been a commercial and civilian traffic junction for Latakia to Aleppo traffic.

“Three attacks in Idlib province, one in Latakia, one in Hama,” he said recently while confirming a Syrian soldier’s death and another’s injury.

He said Russian military police units conducted patrols in the provinces of Aleppo, Hasakah and Raqqa.

The Russian Defense Ministry’s Center for Reconciliation of Opposing Sides and Control over the Movement of Refugees in the Syrian Arab Republic was established in February 2016. The office has negotiated dozens of agreements with terrorists and the Syrian administration, allowing for terrorists to surrender, or be removed safely, so that civilians could return to their homes across the country. The office also coordinates the delivery of humanitarian aid.

Lately, Turkey has been deporting Syrian refugees back home. Turkish President Erdogan is facing a presidential election in June 2023. His opposition has promised to send home all the Syrian refugees, which has caused Erdogan to match their promise. The border crossing at Kessab has seen activity, as well as others, with Syrians being forcibly deported from Turkey.

The Syrian National Army (SNA) is a Turkish-backed mercenary group made up of former FSA fighters after the demise of the group which had been promoted and defended by the late Senator John McCain. Turkey had been keeping a distance between SNA and HTS in the Azaz and Afrin areas; however, Turkey has recently allowed HTS to freely move.

The future status of HTS depends on the changing positions of Russia and Turkey concerning the Idlib region. Turkish Foreign Minister Mevlut Cavusoglu has suggested an advanced agreement might be reached which would see HTS eliminated in Idlib, while the U.S. backed Syrian Defense Forces (SDF) would be shut down in the northeast.

This possibility would need Turkey to repair its relationship with Syria, which has been hinted at over a few months. Turkey and Syria are both keen to remove the U.S. backed SDF from the northeast.

U.S. President Obama planned and found the Arab funding for the U.S.-NATO attack on Syria for ‘regime change’ in 2011. Many U.S. Democrats blame him for not militarily intervening in Syria, but in fact he did. The U.S. administration, through the CIA and Pentagon, supported the terrorist groups as their ‘boots on the ground’ which utilized assets available without having to convince the U.S. Congress to send U.S. troops to Syria. The U.S. does have an illegal military occupation force in Syria, but not in Idlib. However, the U.S. exerts control over Idlib through the UN humanitarian aid delivered which not only feeds civilians, but also feeds the terrorist groups and their families. HTS and IS in Idlib are used by Washington to prevent the end of the Syrian conflict. The American foreign policy on Syria is to maintain the status quo in Idlib: an uneasy truce where Syrians are prevented from rebuilding by threat of terrorists and Congressional sanctions.

Abu Mohammad al-Jawlani is the leader of HTS, and the defacto ruler of Idlib. He is a ‘shape shifter’, able to change his political colors to align with issues shifting on the ground. Recently he broke out of Idlib and engaged in a power shift in the north of Aleppo.

Afrin had been controlled by the U.S.-backed SDF, later the Turkish backed SNA took the area known for olive crops and olive oil production. HTS has entered the area despite a lack of local support. Jawlani developed alliances with hard-core extremists like al-Hamza and the Shah Brigade, which managed to allow HTS into northern Aleppo recently.

Jawlani was interviewed by Martin Smith of PBS Frontline, in which the terrorist cleaned up his image in a suit pandering to a Western audience, and seeking their acceptance.

Jawlani and his HTS are terrorists, but businessmen as well. By controlling border crossings, they took advantage of the trade of oil, fuel, wheat, and cotton, as well as the sale of land and opening of money exchanges. He calls his administration “Salvation Government.”

His prisons such as al-Zanbaqi, al-Eqab, and Harem are full of his former comrades, such as Al Qaeda and IS terrorists.

In the past few weeks, HTS has approached the borders of Azaz, an extremely important city in the orbit of the Turkish backed SNA and the Turkish occupation forces. Jawlani is attempting to control from Idlib province all the way to the northern section of Aleppo. This could only be accomplished by some agreement between HTS and the SNA.

The next Astana Format international meeting on Syria will take place on November 22-23, says Russian Special Presidential Envoy on the Middle East and Africa Mikhail Bogdanov.

According to Bogdanov, Iran and Turkey agreed to take part in the meeting. In addition, the meeting will be attended by representatives of Syrian sides, as well as observer states.

“[Foreign Minister Sergey] Lavrov was in Amman, where they also discussed Jordan’s participation as an observer state. The same is true for Iraq and Libya as Syria’s neighbor states that have high interest in what is happening in Syria, because there are present issues of borders, refugees and security. We welcome these countries’ participation,” the diplomat said.

The previous, 18th international meeting on Syria, took place in Astana on June 15-16.

The road to peace in Syria and the rebuilding of lives and homes there can only be done with the help of neighbors. Absent from the peace process in Astana is the U.S. and the EU, although it is their sanctions which keep the Syrian civilians held hostage, as human shields protecting Western foreign adventures to create a ‘New Middle East’.