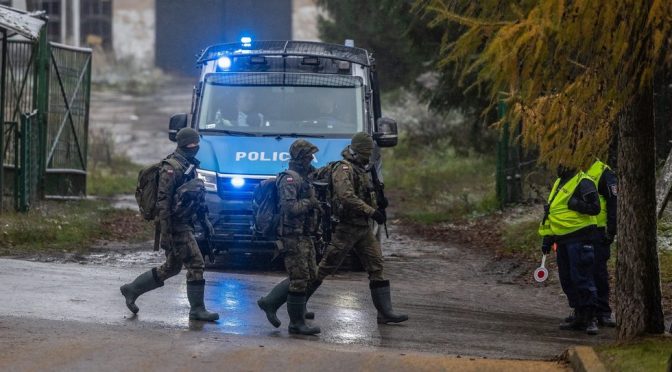 The question is: what will the NATO sponsors do about their Neo-Nazi construct in Kiev?

Ukrainian President Vladimir Zelensky has been caught telling bare-faced lies about a missile strike on Poland this week. Even the United States and NATO backers of the Kiev regime have repudiated initial claims blaming Russia. The missile came from the Ukrainian military as NATO acknowledges, yet Zelensky continued to assert that it wasn’t from his forces. It is clear that the deadly attack was a deliberate provocation by the Kiev regime to escalate the war into an all-out NATO-Russia conflict, even if that meant World War Three.

The Kiev regime’s proclivity for staging provocations is well documented, albeit assiduously covered up by the Western media. Further cover-up is bursting at the seams owing to the manic and utterly criminal conduct of the Neo-Nazi regime.

In nearly nine months of this conflict, which began on February 24 when Moscow launched its special military operation to end non-stop deadly provocations against ethnic Russians in the Donbass region, the NATO-backed Kiev regime has engaged in countless other criminal provocations.

Those provocations include carrying out massacres like the one at Bucha at the end of March, shelling the Zaporozhye nuclear power plant, and plotting to detonate a dirty nuclear bomb. As our weekly editorial on October 28 headlined: “Dirty Nuke Bomb Fits Kiev Regime’s Record of Foul Tricks and Corruption”.

The Kiev regime was born out of a dirty trick. The Maidan Square sniper massacres in February 2014 against Ukrainian civilians and police officers culminated in a coup d’état.

It was fitting too that this week saw a Dutch court blaming Russia for the shooting down of a Malaysian airliner in 2014. The real culprits for the crime – in which 298 people onboard were blown out of the sky – were the Kiev regime forces who tried to blame it on Russia-backed Donbass separatists.

All such dirty tricks are purposed to criminalize Russia for “atrocities” and to escalate the war by invoking even more military support from the United States and its NATO partners. The Western states and their pliant corporate media have totally indulged in this propaganda to demonize Russia, if not at times author it.

This week, when the missile hit the village of Przewodow in the Lublin region of eastern Poland – killing two civilians – on November 15, the Kiev regime immediately blamed Russia. The comic-actor-turned-president Zelensky said it was an “act of terrorism” and an attack on NATO, thus justifying the bloc’s collective defense clause. His foreign minister Dmytro Kuleba clamored for NATO to impose a “no-fly zone” over Ukraine and to supply F-15 and F-16 fighter jets.

The hysterical claims, much like the missile itself, completely overshot credibility. There were no Russian air strikes anywhere near the Ukraine-Poland border area at the time. Video footage of munition fragments also quickly indicated that it was an S-300 air-defense missile that was fired by the Kiev regime’s forces.

Remarkably, however, Zelensky’s incendiary claims were promptly rebutted by U.S. President Joe Biden, the Pentagon and other NATO leaders. They firmly said the missile that struck Poland was not a Russian weapon but rather it came from a Ukrainian air-defense battery which, it was claimed, missed its target, accidentally landing on Polish soil.

But even that benign account does not hold water. For a start, the Russian military was not targeting the area with their precision-guided missiles. There were no incoming Russian rockets whatsoever. So what was the Ukrainian S-300 aiming at? The fact that the S-300 was fired westwards toward Poland shows that the act was a deliberate one to hit the neighboring country and a member of NATO.

The rapid rejection of the Kiev regime’s claims by the United States and other NATO powers not only exposes Zelensky and his cabal as liars. It also inadvertently exposes them as criminal provocateurs who are willing to kill civilians for propaganda and political expedience.

Are Washington and its European vassals perhaps beginning to realize that they have created a Frankenstein monster in Kiev whose criminality and corruption know no bounds? The United States and its imperial minions certainly want to undermine and subjugate Russia in a grand scheme of geopolitical control, but even the arrogant would-be hegemon must realize that World War Three is an insane no-win prospect.

The Kiev regime has milked the U.S. and the European Union for all their worth and created a fabulous money racket for the NATO military-industrial complex. But this regime’s desperation and its reckless attempts to incite World War Three appear to have become too much even for its Western patrons.

It seems significant that lately, Washington appears to be coaxing the Kiev regime to enter into a peace process with Russia. The U.S. top military commander, General Mark Milley, who is the Chairman of the Joint Chiefs of Staff, has urged Kiev to “seize an opportunity for peace”.

Separately, astute independent American military analysts, such as Scott Ritter and Douglas Macgregor, have pointed out that Russia has the decisive upper hand in the conflict. As the war drags on over winter and beyond, the real danger is that the NATO and transatlantic alliance will collapse from the stresses and strains ensuing from devastating economic repercussions. That is why the United States and NATO leaders appear to be feeling the pressure to extricate from the war, or at least to tamp it down.

It was notable that the Kiev regime angrily lashed out at any suggestions of opening a peace dialogue with Moscow.

This would explain why the Zelensky cabal decided to raise the stakes by firing a missile at Poland. The selected target of Przewodow village would have been a tacit concession to limit the casualties, although making the deliberately murderous act no less despicable or unconscionable.

The trouble is the cabal has become so corrupt and wanton that it didn’t sufficiently think through its obvious criminal plan. The missile strike ended up backfiring spectacularly to blow up the regime’s criminality.

The question is: what will the NATO sponsors do about their Neo-Nazi construct in Kiev? The regime is patently out of control and liability for the Western powers. They know they can’t win a conventional war against Russia never mind a nuclear conflagration. So, will we see Zelensky and his cronies being taken out, in one way or another, having become too problematic for their foreign masters?

History shows that the Western powers have used Nazis and fascists in the past as their proxies against the Soviet Union and other adversaries, only for these powers to eventually be compelled to liquidate their proxies when their usefulness expires or becomes overbearing.