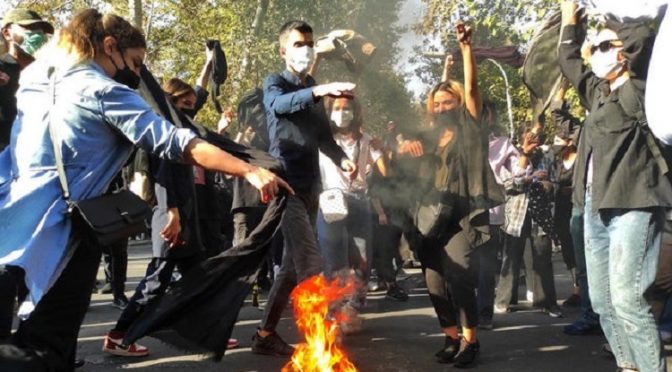 A baseless claim that Tehran ordered the execution of 15,000 protesters was repeated by politicians and celebrities.

“We cannot allow falsehoods and disinformation about Russia’s invasion of Ukraine to continue spreading in Canada. That’s why we asked the CRTC to review Russia Today’s presence on Canadian airwaves,” Canadian Prime Minister Justin Trudeau tweeted back in March,

as he followed the lead of allies in the EU in censoring Russian media outlets, while failing to cite any actual evidence of fake news to justify the crackdown on freedom of speech and information.

All too often, Western ‘democracies’ evoke ‘disinformation’ as a pretext to deprive the public of information and analysis that could raise doubts about the official establishment narrative. But despite positioning himself as a gatekeeper of truth, Trudeau spread some fake news of his own this week.

US Senator Mitt Romney tweeted that “the tyrannical actions of Iranian leaders in moving to execute detained protesters must be condemned by the global community. Sham trials should be halted and protesters released.” Even Hollywood celebs like X-Men actress Sophie Turner and Oscar winner Viola Davis got in on the action of spreading the mantra that Iran was sentencing 15,000 anti-hijab protesters to death.

On November 15, geopolitical analyst and Eurasia Group founder Ian Bremmer noted that something was off. “It’s been brought to my attention that a post I shared yesterday about capital punishment in Iran for 14,000 protesters is unverifiable & likely untrue,” he admitted, to his credit. It turns out that he was right.

The original Newsweek article referred to an Iranian parliamentary vote to execute protesters. The piece cites a tweet, posted by a murky source on November 8, relaying that “Iran’s parliament voted by a majority (227 out of 290) to execute all protesters.” Except that there was no such vote.

Curiously, on November 6 – two days before the Newsweek article and the tweet on which its based was published, Iranian activist Masih Alinejad tweeted, “227 members of the 290-seat parliament in Iran have called on the judiciary to issue death sentences for people arrested during the ongoing uprising.”  Newsweek explicitly cited Alinejad’s Tweet, before later deleting it.

The parliamentarians did issue a statement to the judiciary encouraging it to deal with protesters “decisively,” but there was no such parliamentary vote to execute them en masse. It took about a week for Newsweek to amend its article and remove reference to the Iranian parliament voting for death sentences.

Iran does have the death penalty as an option in sentencing by courts, just like in the US, but from there, the assumption became that anyone and everyone arrested at protests was going to simply be executed.

No doubt it’s just a coincidence that Alinejad happens to be the lucky recipient of $628,000 in US State Department funding over the past eight years, according to the online US federal contract database. She has also worked as an anchor for the US government’s Voice of America Persian language media service.

Back in January 2020, as the Trump administration was ramping up Iranian regime-change rhetoric in the final weeks of Donald Trump’s term after losing to Joe Biden, Washington’s Institute for Responsible Statecraft ran a photo of Alinejad with Secretary of State Mike Pompeo and denounced the Western press for platforming Alinejad to promote Iranian regime change without disclosing her State Department funding.

It wouldn’t be the first time that Iranian regime change was powered by fake news. In 1953, the CIA overthrew the government of Prime Minister Mohammad Mosaddegh in the wake of his nationalization of Iranian oil to keep it out of the hands of Western multinationals. The CIA’s Operation Mockingbird, which ran from 1948 to 1976, infiltrated the press to promote disinformation and propaganda that greased the skids for its foreign policy objectives – including in Iran, as declassified documents have since revealed.

So now that crusading anti-disinformation gatekeepers like Trudeau and Pompeo have been busted violating their own standards, are they going to ban themselves from media platforms before they can reoffend and do any more damage and dupe more Westerners into cheerleading in favor of yet another war?

Where’s the EU to denounce this blatant disinformation peddling and ban the source like they’re so quick to do every time any Russian official or media outlet says something that merely dares to contradicts their own narrative?

Speaking of which, if Trudeau, Pompeo, and others would so easily spread fake news that suited their narrative, how credible are they on anything else?

One can only imagine the policy decisions that they’ve adopted based on equally dodgy takes presented to the public as fact.