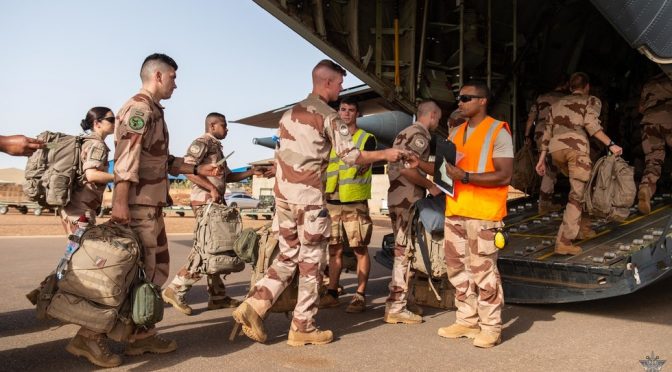 The global geopolitical shift continues with the Republic of Mali kicking out blackmailer France and its NGOs, in favor of Russian economic and security cooperation.

Mali declared a ban this week on the activities of non-governmental organizations within the country that receive funding from France. The move came in the wake of France’s decision to withdraw development aid to the country as its final troops pull out of the Sahel region, marking the end of the eight-year Operation Barkhane.

What started as a counterterrorism operation in Mali had until recently begun to take the shape of a showcase for French President Emmanuel Macron’s vision of an integrated European defense. Now that dream seems to be falling apart due to an overstayed welcome and less than stellar performance. Whose fault is that? Russia’s, according to Macron.

The fact that there were three coups in Mali in the space of a decade is pretty much all one needs to know about the ‘success’ of France’s ongoing security and stability operation. Play around with a revolving door long enough and you’ll get smacked right in the face. Which is exactly what happened when France was ultimately kicked out earlier this year by the most recent interim government.

Macron then said that the French troop drawdown would happen gradually, as though he were still calling the shots on a former French colony. The message from Mali was clear: You’ll get out now. So then Macron said that French troops would just redeploy elsewhere to the Sahel region. But on November 7, he announced that the Sahel mission was ending as well, despite French troops still remaining in Chad and Niger.

Nonetheless, Macron said that within six months there would be a new French military strategy for Africa, no doubt geared primarily towards finding a way to stick around as an eventual pretext for getting Western hands on the African natural resources that Europe desperately needs. Because that’s what it has always been about. Just consider the darkly hilarious spectacle of Patrick Pouyanné, the CEO of France’s multinational Total Energies asking the EU to send him military assistance in Mozambique a couple of years ago, citing the growing presence of Daesh (ISIS). This is an indication that once Western industry has successfully planted its feet inside a country and secured its resources, fighting terrorism doesn’t really matter so much anymore.

African political experts here in Paris have been saying for the past few years that the French operation in the Sahel had worn out its welcome and that its anti-jihadism effectiveness was highly doubtful, if not disastrous. You’d think that would have led to some soul searching on Paris’ part, particularly when anti-French sentiment is multiplying on the continent, with protests in Burkina Faso also sparking debate over the troop presence there.

But, before any introspection even had a chance, Macron found a scapegoat for Paris and Europe’s African failures: Russia.

“A number of powers, who want to spread their influence in Africa, are doing this to hurt France, hurt its language, sow doubts, but above all pursue certain interests,” Macron said this week at a Francophone conference in Tunisia, citing a “predatory project” by Russia to push “disinformation.” Macron still seems sore about the fact that, when the Malian government kicked French troops out, they opted instead for more security cooperation with Russia, with the latest of such agreements signed just this week during Mali Interior Minister Daoud Aly Mohammedine’s visit to the Kremlin.

There’s no way that Macron is naïve enough to think that global competition doesn’t exist. Nor is he oblivious to the fact that countries are constantly selling themselves as partners to other nations. That’s what a nation’s entire diplomatic corps is for. They’re glorified sales and PR people. And, if amid France’s security cooperation in Mali, jihadists are running rampant and coups d’état are happening, then why shouldn’t that country exercise its sovereign right to choose a different security provider? Rather than assume responsibility, it’s easier for Macron to blame Russia for France’s failures and it fits with the current dominant Western narrative.

Two years ago, Facebook said it had put its finger on what it claimed to be dueling online influence efforts in the Central African Republic by “individuals associated with the French military” squaring off against others they linked to Russia. The incident underscores that Paris is neck-deep in efforts to save its footprint in Africa using all of the tools at its disposal, including influence operations in which Macron publicly pretends France and its allies would never engage.

Mali apparently begs to differ. Of all the possible efforts by various countries attempting to compete for partnerships in Africa, Mali has just singled out France by banning its ability to use in-country NGOs as proxies in support of Paris’ agenda. So, despite Macron’s accusations that Russia is gaining a foothold in Africa through “disinformation,” it’s France’s own influence operations that African countries like Mali are actually denouncing.

One thought on “Mali Kicks Out France in Favor of Russia”