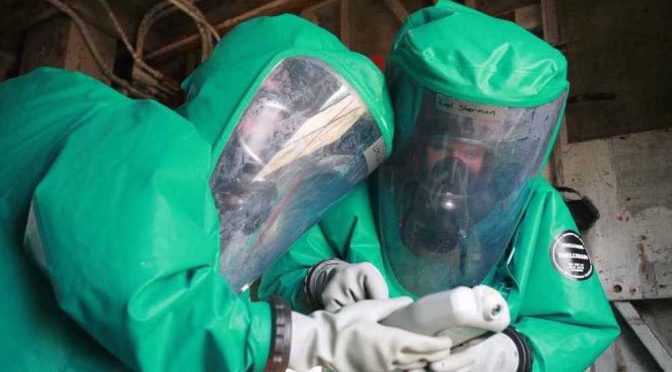 Unfinished projects are being relocated to Central Asian and Eastern European countries, according to the Russian military.

Washington has been moving its bioweapons research out of Ukraine, the head of Russia’s Nuclear Biological and Chemical Defense Troops has claimed. This comes after the research laboratories’ existence was exposed under the Trump presidency.

“The Pentagon is actively working to transfer its unfinished research projects to the countries in Central Asia and Eastern Europe,” Igor Kirillov insisted during a briefing on Saturday.

The US has also been boosting cooperation with Cambodia, Singapore, Thailand, Kenya and other nations in the Indo-Pacific and Africa, with “the US Department of Defense being most interested in countries that already possess laboratories with a high level of bioсontainment,” he added.

According to the commander, data on illegal, US-backed laboratories in Ukraine was presented at the Organization for the Prohibition of Chemical Weapons conference, which took place in Geneva between November 28 and December 16.

It included “documentary evidence that work with components of biological weapons and studies of pathogens of especially dangerous and economically significant infections had been carried out on the territory of Ukraine with financial, scientific, technical and personnel support of the US,” he noted.

Papers obtained by Russia during its military operation in Ukraine reveal that “military-biological programs” were run through the Mechnikov Anti-Plague Research Institute in Kiev, the Institute of Veterinary Medicine in Kharkov and the Lviv-based Research Institute of Epidemiology and Hygiene, Kirillov claimed.

The files also mentioned three Pentagon contractors and seven high-ranking officials of the US Department of Defense, he added.

The full text of a report by the US Defense Threat Reduction Agency (DTRA) on its work in Ukraine, seen by the Russian military, contained data, “confirming the conduct of exercises and training activities with pathogens of especially dangerous infections” in Ukraine, Kirillov said. When the Pentagon released this report to the public, 80% of its content had been redacted, he pointed out.

According to the Russian commander, the head of the American delegation at the conference declined to respond to Russia’s accusations of violations of the Chemical Weapons Convention (CWC) by his country.

“Such a stance by the US and its blocking of any initiatives to resume work on the verification mechanism of the CWC once again confirms that Washington has something to hide, and that ensuring transparency in terms of compliance with the convention doesn’t play into the hands of the Americans,” he said.

However, the report by Russia didn’t go unnoticed by other countries and “made many member-states reflect on the risks posed by cooperation with Washington in the military-biological area,” Kirillov stressed.

The Russian military has been gradually releasing materials on the work of the US-backed biolabs in Ukraine since March. Washington has denied Mocsow’s bioweapons claims, calling them disinformation and a conspiracy theory used by Russia to justify its military operation.

UN Security Council votes against probe into US biolabs

The US, France, and Britain shut down Russia’s call to investigate “military-biological” activities in Ukraine.

The UN Security Council has rejected Russia’s call for an international investigation into claims that the US used laboratories in Ukraine to develop biological weapons.

While China backed Russia’s proposal, the US, Britain, and France voted against it, and the ten rotating council members abstained.

Russia insists that the US and Ukraine have been violating the 1972 international convention that bans the development, production, and stockpiling of biological weapons. According to Moscow, several laboratories in Ukraine were working on a secret “military-biological” program, which involved studies and the stockpiling of samples of anthrax, cholera, and other infectious diseases.

During the vote in the Security Council on Wednesday, US envoy, Linda Thomas-Greenfield, argued that the Russian proposal for a probe is “based on disinformation, dishonesty, bad faith, and a total lack of respect for this body.”

Thomas-Greenfield reiterated that the activities under the Pentagon’s Cooperative Threat Reduction (CTR) program in Ukraine and other former Soviet states “are not for military purposes.”

The US Mission to International Organizations in Geneva, Switzerland said in April that the CTR’s goal in Ukraine was to help the country “consolidate and secure pathogens and to continue to ensure Ukraine can detect and report disease outbreaks before they pose security or stability threats.”

Dmitry Polyansky, Russia’s deputy envoy to the UN, meanwhile, said he was “deeply disappointed” by the vote. He said “the Western countries are simply afraid” of an international investigation into the issue.