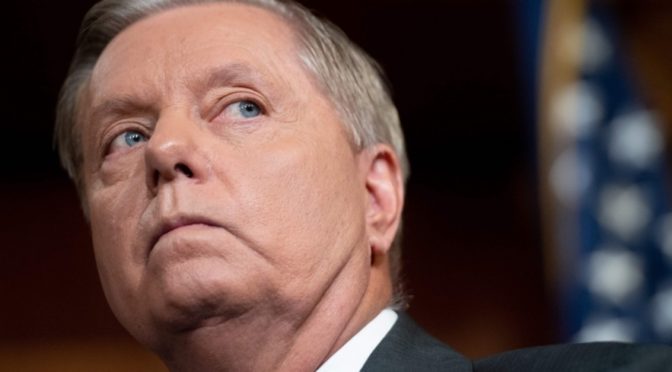 The hawkish senator says the US should give Ukraine Gray Eagle drones to ‘kill tons of Russians’.

Senator Lindsey Graham (R-SC) has repeated a call for Russian President Vladimir Putin to be assassinated, saying that the only way the war in Ukraine could end is if Russia “breaks” and someone “takes Putin out.”

“How does this war end? When Russia breaks, and they take Putin out. Anything short of that, the war’s gonna continue,” Graham said on the Fox News program America Reports on Wednesday.

Graham said the US is “in it to win it, and the only way you’re gonna win it is to break the Russian military and have somebody in Russia take Putin out to give the Russian people a new lease on life.”

Lindsey Graham says the only way the war in Ukraine will end is if Russia "breaks" and someone "takes Putin out" pic.twitter.com/M5do9Oj06q

The hawkish senator made similar comments back in March when he asked if there was a “Brutus” in Russia who could kill Putin. In his comments on Wednesday, Graham also said the Biden administration should send Ukraine the advanced and long-range weapons that Kyiv has been asking for.

When asked to what extent the US should continue to support Ukraine in the war, Graham replied, “completely, all in without equivocation.” He said the US needs to provide Ukraine with longer-range weapons to help “dislodge” Russia from areas of eastern Ukraine, including Crimea.

He said if Ukraine had larger drones, such as Reapers and Gray Eagles, Ukraine would “kill tons of Russians without losing any Ukrainians in the endeavor.” Ukraine has asked for Gray Eagle drones, which can fly for about 30 hours and are capable of carrying powerful Hellfire Missiles, but the Biden administration has held off from sending them so far.

The original source of this article is Antiwar.com Copyright © Dave DeCamp, Antiwar.com, 2022

One thought on “Sen. Lindsey Graham Says Ukraine War Will Only End If Putin Is ‘Taken Out’”