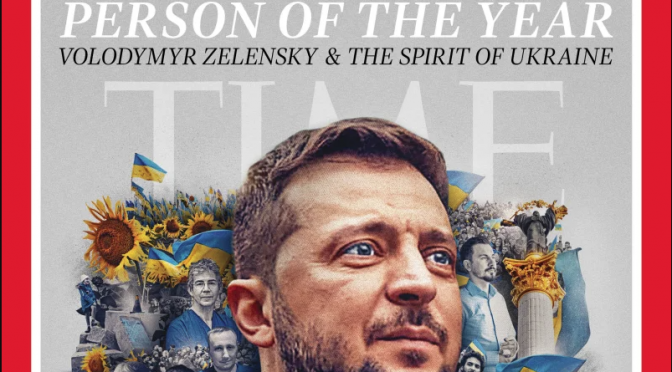 President Zelensky has just been named by Time magazine “politician of the year 2022”. It is not to have realized his coup de force of July, in favor of the war. He had all the political parties that opposed him banned; assassinated the personalities who resisted him; controlled all the media, written, audiovisual and internet; banned the Russian language;

destroyed 100 million books; confiscated many of the assets of the oligarchs, including the one who personally financed him; nationalized the assets of Russian investors and companies; and finally banned the Orthodox Church.

The Ukrainian president Volodymyr Zelensky has been named by Time Magazine as the “Person of the Year 2022”; an obvious choice, according to the magazine’s editors. Indeed, he embodies an infectious courage that has enabled his people to resist the Russian invasion.

However, in his country, power has gradually passed from his hands to those of his deputy chairman of the National Security and Defense Council, Oleksiy Danilov, since July 25. Zelensky is concentrating on his role as spokesman for the regime, leaving Danilov to prepare the decrees he signs. Together, the two men established a regime of terror.

On July 17 and 25, three members of the Council were dismissed for numerous acts of treason reported by the officials under their command:

Speaking about those crucial days, Rinat Akhmetov, the richest man in Ukraine before the war, said that Zelensky had seized power, all power, under the guise of reform.

On August 26, Oleksiy Danilov revealed on the NTA channel that the Security and Defense Council had adopted a plan for the defense of the country in November 2021, that is, four months before the Russian military intervention. This document had been prepared since Zelensky rejected the plan for a Minsk-3 proposed by Paris on December 8-9, 2019. “It is a huge fundamental document that sets out the activities of all bodies without exception: who and how to act in a situation of martial law,” he said, September 7 in Left Bank.

Political assassinations are usually carried out by “mainstream nationalists” and not by government bodies. At any time, they can kidnap and disappear, or even execute political opponents directly in the street in full view of the public. The victims are primarily journalists and elected officials. This is not a new operation since these murders have punctuated the civil war since 2014.

One thinks of the deputy Oleg Kalashnikov, murdered with eleven bullets in the head on the doorstep of his house, in 2015. The police have never established, neither who carried out the assassination, nor who ordered it.

However, in some cases, they are the work of the SBU (security service). For example, the execution of the official negotiator, Denis Kireev, on his return from Kiev, where he had participated in contacts with Russia without success. He was killed in the street on March 6, 2022, because during the negotiations he had dared to mention the historical ties between Kiev and Moscow.

The political leaders do not publicly assume these acts, but encourage them. They say that the country must be “purified”. It is not a question of killing agents of the Russian Federation, but any bearer of Russian culture or anyone who recognizes the value of this culture.

The mayor of Kiev, boxing champion Vitali Klitschko, has commissioned the neo-Nazi group C-14 to hunt down and kill “saboteurs” among Ukrainians of Slavic origin.

The SBU is henceforth arresting many civilians it accuses of collaborating with the Russians.

While, according to the Minsk II Agreements (Art. 11, explanatory note [1]) of February 12, 2015, the Donbass regions were to be able to determine their own official language, Oleksiy Danilov declared on September 1, 2022: “It is they [the inhabitants of Donbass] who must find a common language with us, not we with them. We have borders, and if someone is not satisfied with the laws and rules that apply on the territory of our country, we do not hold anyone back.

On October 21, he was more specific: “The Russian language should disappear completely from our territory as an element of hostile propaganda and brainwashing for our population.

Oleksiy Danilov, said on July 20, in the midst of the Security and Defense Council crisis, that many people who used to appear on television before the “Russian aggression”, no longer appear. “We do not know where they have gone. The SBU will make strong statements about them”. He accused them of reporting the Russian point of view: “Implanting these Russian stories here is a very, very dangerous thing. Apparently we should understand what they are. Look: we don’t need them. Let them leave us, let them go to their swamps and croak in their Russian language.

The Security and Defense Council had already placed all print and broadcast media under its surveillance. In addition, it had banned a hundred Telegram channels that it had labeled “pro-Russian.”

The Ukrainian Book Institute, which oversees all public libraries, was tasked on May 19, that is, before the Security and Defense Council crisis, with destroying 100 million books [2].

The aim was to destroy all books by Russian authors or printed in Russian or printed in Russia. In practice, a commission was appointed within the Verkhovna Rada to ensure the implementation of this intellectual purge. It turned out that the vast majority of books in the libraries were practical books on cooking, sewing, etc. They waited for a while before being removed. They waited for a while before they were plundered, with priority given to evil authors like Alexander Pushkin and Leo Tolstoy.

The 12 opposition political parties were banned, one by one. The latest one was sanctioned on October 22 [3]. Their elected representatives were dismissed.

Only the Transcarpathian oblast (close to Hungary) refuses to dismiss local representatives of banned political parties.

Confiscating The Property of Opponents And Russians

Since the end of February, the Ukrainian Agency for Asset Research and Management (ARMA), the European Union’s anti-corruption body, has seized assets worth more than 1.5 billion hryvnias, or $41 million dollars.

One by one, the oligarchs who own media outlets were forced to hand over their assets. This is a general plan to free the country from their influence. However, they still have the right to own other types of companies.

According to the Ukrainian law of 2021, oligarchs are the 86 citizens who have at least $80 million, participate in political life and have great influence on the media. According to Oleksiy Danilov, there should be no more oligarchs at the end of the war.

The Security and Defense Council decided on November 7 to nationalize factories belonging to oligarchs, including Igor Kolomoisky, the financier of Volodymyr Zelensky. They have been placed under the administration of the Ministry of Defence and should be “returned to the Ukrainian people” at the end of martial law.

This decision applies, among others, to the Ukrainian aircraft engine manufacturer Motor Sich, which was in dispute with Chinese investors before an arbitration court in The Hague (Beijing Skyrizon case). China, which claims 4.5 billion dollars, called the nationalization “theft”. According to Beijing: “Since 2020, the Ukrainian government has continuously created problems, blamed, repressed and persecuted Chinese investors without reason, and even imposed special economic sanctions without reason, with the intention of nationalizing Motor Sich PJSC by illegal means and shamelessly looting Chinese assets abroad.”

The Security and Defense Council on October 20 seized the assets of 4,000 Russian companies and individuals in the country.

This decision also applies to Ukrainian personalities who had settled in Russia before the war, such as singers Taisiya Povaliy, Ani Lorak, Anna Sedokova and television presenter Regina Todorenko.

The National Security and Defense Council of Ukraine decided on December 1, 2022 to “prohibit religious organizations affiliated with centers of influence of the Russian Federation from operating in Ukraine,” President Zelensky announced when signing Decree 820/2022 [4].

The “State Service for Ethnopolitics and Freedom of Conscience” was tasked with seizing the
Orthodox Church buildings under the jurisdiction of the Moscow Patriarchate.

Two weeks ago, the Ukrainian security service (SBU) violently searched a monastery, accusing popes of daring to describe Russia as the “Motherland.

President Zelensky believes that he respects Western human rights standards. Indeed, the European Court of Human Rights will no longer be able to register complaints from Russia since Moscow has left the Council of Europe.

Cutting Off All Relations with Russia

On October 4, President Zelensky signed a decree prohibiting any further negotiations with Russia.

On December 1, Oleksiy Danilov called for “the destruction of Russia. He clarified his statement as follows:

“They just need to be destroyed so that they cease to exist as a country, within the borders in which they now exist… They are just barbarians. And when you say that you have to sit at the same table with these barbarians and talk with them, I consider that unworthy of our people.

One thought on “Volodymyr Zelensky and Ethnopolitics”