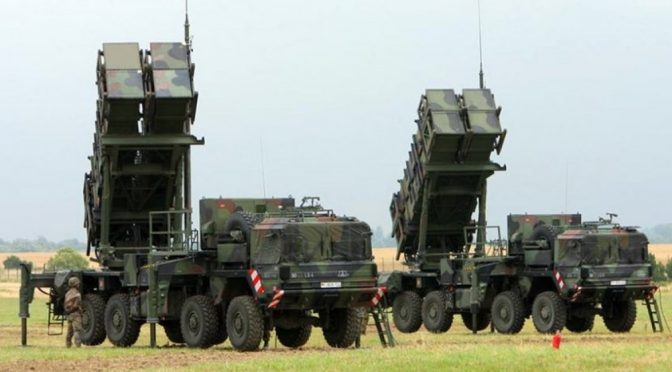 It’s idle to dwell on the cringe-worthy visit of the Kiev clown to Crash Test Dummy at the White House, coupled with a “Churchillian” speech at the War Party dominions in Capitol Hill. History will ridicule this Hollywood soap for centuries ahead.

Way more juice is provided by the latest War Party P.R. show, sponsored by Raytheon Productions. After all Lloyd Austin, the current Pentagon head, is a former Raytheon weapons peddler.

After much fanfare, it was established that the Pentagon will provide not a collection, but a single Patriot battery to Kiev – either with four or eight missile launchers, and either the PAC 2 or PAC 3 version.

Instead of training Ukrainians at a U.S. Army base in Grafenwoehr, in Germany, the Pentagon is mulling the possibility of training them at a U.S. base, most certainly Fort Sill in Oklahoma, where most instructors actually live, side by side with their integrated training simulators. Up to 90 military are required to operate and maintain a single Patriot battery.

Considering the extensive training required to operate such a costly ($1 billion) and complex system, if they are on the ground during the first semester of 2023 this will mean, ominously, that the operators may be American, or at least NATO mercenaries.

The implied consequences are self-evident. Especially when the Russian Ministry of Defense has already pointed out that the Patriot will be considered a legitimate target.

So assuming all of the above will happen in practice sometime in 2023, it will be a blast to compare the Patriot performance in Ukraine with the Patriots at work in the lands of Arabia – which were routinely dribbled like Messi on an average match by Iranian and Houthi missiles. The Houthis always had a ball targeting Saudi oil installations.

What may change it that unlike in the Arab peninsula, all the collective West’s intel, recon and satellite firepower is in a state of alert in Ukraine 24/7.

The inestimable Andrei Martyanov has already came up with the essential breakdown of all Patriot essentials. Let’s focus on a few intriguing details.

A single Patriot battery will exercise less than zero impact on the Ukrainian battlefield. This battery would in thesis cover the most strategic Ukrainian installations: a very limited area, as in a small military base. That has nothing to do with protecting Kiev.

What’s way more significant, conceptually, is that this Patriot deployment, in connection with other air defense systems such as NASAMS, IRIS-T and the possible transfer of the SAMP-T, proves once again that Ukraine is under a de facto NATO multi-level air defense system. The Patriot is completely integrated with NATINADS, NATO’s air defense system.

Translation, if needed: this keeps evolving, fast, into NATO vs. Russia Total War.

Nice little system you got here

All eyes will be on escalation. The Americans may start with a single Patriot just to test the system under a serious missile attack (assuming the Russians don’t destroy it right away. Remember: “legitimate target”).

It’s fair to consider the Russian General Staff may be already plotting how to instantly go for the kill. The P.R. value, for Moscow, of turning the American P.R. op on its head would be invaluable.

President Putin was barely containing his glee when talking to the Kremlin pool earlier this week: “The Patriot system is not as effective as our S-300 (…) There will always be a countermeasure.”

Then there’s the nagging question of “why now?” The real motive of this “emergency” – sort of – Patriot delivery may have to do with serious problems with the American/NATO systems already on the ground.

The HAWK is woefully incapable of intercepting modern cruise missiles. The IRIS-T is quite raw – and needs non-stop supervision by repair teams from Germany. The NASAMS is also anti-missile impaired. In sum: “inadequate” does not even begin to describe them all.

And all that is happening simultaneously with the depletion of Soviet-era complexes – as well as the anti-aircraft guided missiles that supplied them.

Another key issue is who’s gonna pay for this P.R. op.

The current modified version of Patriot launchers costs roughly $10 million. A single missile costs a whopping $4 million. Russia already spends de facto pocket money on drones – and will spend even more. Firing a $4 million missile at a drone worth at best $50,000 does not even qualify as a joke.

So what is this for? Once again: Empire Escalating, mindlessly, with no end in sight. Putin and his circle, in over two decades, have tried absolutely everything to integrate Russia to the West. Russia was rebuffed every step of the way. Now this strategy has been declared null and void – ever since the American non-response response a year ago to the official Russian letters requesting a serious discussion on “indivisibility of security”. No wonder the Empire is freaking out.

Now both Putin and Russia’s excelling diplomatic corps keep stressing, on the record, that the collective West’s target in using Ukraine is to provoke the disintegration of Russia. So this remains an existential do or die affair. No wonder Russian envoy to the U.S. Anatoly Antonov qualified the state of Russia-U.S. relations as resembling an Ice Age.

Nearly three years ago I christened this decade, right at the start, as the Raging Twenties. That’s how the Empire made its play, right in the open, when they killed Iran’s Gen Soleimani in a multiple drone attack during an official diplomatic visit to Baghdad.

Little did we know that by 2023 the raging would go beyond paroxysm.

Pepe Escobar is a columnist at The Cradle, editor-at-large at Asia Times and an independent geopolitical analyst focused on Eurasia. Since the mid-1980s he has lived and worked as a foreign correspondent in London, Paris, Milan, Los Angeles, Singapore and Bangkok. He is the author of countless books; his latest one is Raging Twenties.