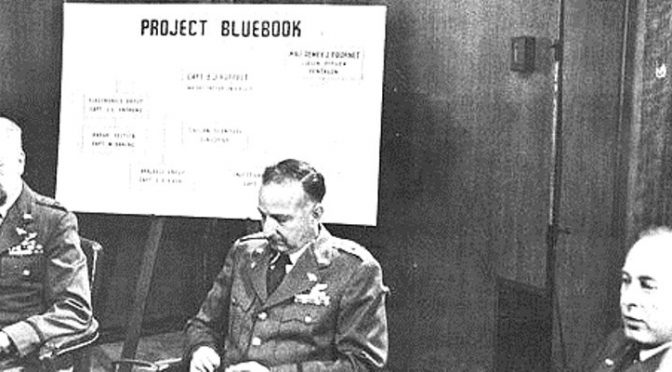 Buried below the web page of Washington Post is a rare disclosure on UFOs from the United States’ Project Blue Book reinforcing the “conspiracy theory” to  deliberately fool the population that they are alone in the universe.

This disclosure, is of course, incomplete.
They are probably planning a big deal about it, probably a grand announcement by some self-serving politicians.

By Nick Kirkpatrick and Justin Moyer January 21 at 7:48 AM

Documents newly available online explore the case of alleged aliens in Orange County, Calif., in 1965.
If not interrogated or probed by hostile alien beings, those lucky enough to see an unidentified flying object may consider themselves blessed. While their experience may be the result of optical illusion, mental illness or alcohol consumption, they have some margin of proof, however slim, that mankind is not alone in the universe.
Until, of course, the United States government shows up. All too often, Uncle Sam has pedestrian — and, for those open to conspiracy theories, suspect — explanations for UFOs. Unidentified flying objects are the result of swamp gas. Unless they’re weather balloons. Or the planet Venus.
So read the files of the Air Force’s Project Blue Book — official records of more than 12,000 UFO sightings between 1947 and 1969 available online in a searchable database for the first time.
“This is as accessible as they’ve ever been,” said John Greenewald in a telephone interview with The Washington Post. The 33-year-old UFO enthusiast and filmmaker built the database, a 130,000-page treasure trove called the Black Vault, using images he and another researcher obtained. “It’s a very comprehensive way of looking at the documents,” he said.
But all the tales the Black Vault tells do not end with Earthlings in communion with advanced beings. These files — which do not include the famous 1947 Roswell sighting — are filled with questionable UFOs that are not the stuff of detailed Wikipedia pages.
Example: Joseph Simonton of Wisconsin who, in 1961, said he hung out with a few E.T.’s who fed him pancakes.

Blue Book squashed all that.
“The witness was found to be a balanced person of good mental health and that he actually believes that the sequence of events really happened,” Simonton’s file reads. “However the inconsistencies coupled with lack of supporting evidence tend to indicate that the witness suffered an (sic) hallucination followed with delusion.”
But Greenewald said that Blue Book — what he likened to a “PR campaign” for the military to allay public fears about extraterrestrials — contains plenty of the strange, unusual and unexplained. Indeed, about 700 unidentified flying objects in the project documented remain, well, unidentified.
“Look at these cases and see — there really was something to this,” Greenewald said. “From a scientific point of view, you can’t omit 2 percent of your evidence. You still have those few that defy explanation. You still can’t let those go.”
Greenewald singled out the Thomas Mantell incident, a 1948 sighting in which an Air National Guard pilot crashed allegedly while chasing a UFO across Kentucky. Blue Book’s final word on the case does little to inspire confidence in scientific explanations of Mantell’s death.
“Apparently, Mantell blacked out at 20,000 ft or proceeded on since the object apparently appeared closer (if such were the case) and then crashed thru lack of oxygen,” it reads. “Does not seem to tally with report that the phenomena was ‘Venus or a comet.’”
While Greenewald loves a good UFO yarn, he said that his work, which includes maintaining the Web site governmentsecrets.com, is about more than little green men. This is a man who filed his first Freedom of Information Act request at 15.

“I’ll go after any government secret that’s out there,” he said.
The Air Force, of course, said there’s nothing to see here.
“(1) no UFO reported, investigated, and evaluated by the Air Force has ever given any indication of threat to our national security,” it wrote about Blue Book in 1985. “(2) there has been no evidence submitted to or discovered by the Air Force that sightings categorized as “unidentified” represent technological developments or principles beyond the range of present-day scientific knowledge; and (3) there has been no evidence indicating that sightings categorized as ‘unidentified’ are extraterrestrial vehicles.”
Now that Blue Book — previously available only on microfiche at the National Archives — is on the Web, it’s up to citizens to come to their own conclusions about close encounters with the third kind.
“Is it alien or not?” Greenewald said. “Your guess is as good as mine … but goes to the heart of a true government coverup — that they don’t want us to know what is going on with this topic.”
More sightings from Project Blue Book:
1947: UFOs swarm Mt. Rainer in Washington state Kenneth Arnold shortly after his 1947 sighting of nine alleged UFOs near Mount Rainier, Wash. “He vowed that if he saw any more of these things he’d get it on camera,” Kim Arnold, his daughter, said 50 years later. (Idaho Statesman via AP) The nation’s capital is not immune to UFO sightings. In this 1952 incident, a “civilian man” saw two discs float toward Andrews Air Force Base at “jet speed.” They were “white, like absorbent cotton or (a) white cloud on a sunny day.” Blue Book’s conclusion: “probably balloon.” (Courtesy of John Greenewald/ The Black Vault) 1961: The Barney and Betty Hill abduction Barney Hill and Betty Hill of Portsmouth, N.H., in 1966.
They claimed to have been abducted by UFO extraterrestrials in New Hampshire’s White Mountains. (AP) Northwestern University astrophysicist J. Allen Hynek on March 25, 1966, in Detroit. A journalist handed this photo to Hynek and asked him if it was a flying saucer. Hynek said numerous sightings of recent unidentified flying objects in Michigan were probably the result of swamp gasses and not visitors from outer space. At the time, Hynek had studied UFOs for 15 years. (Alvin Quinn/AP)