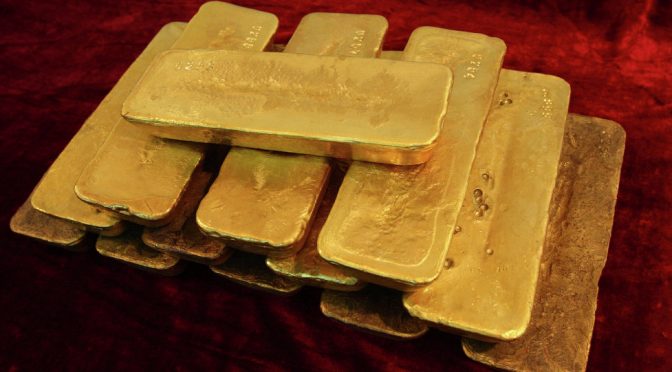 As expected, the BRICS countries led by China and Russia are keeping up with their pressure against the Nazionist Cabal and are still on track on the previously planned systematic depletion of the privately owned Federal Reserve out of its borrowed gold bullion known collectively as the Global Collateral Accounts.

The message has never been clearer. On the eve of China’s Victory Day celebrations, Russia made at least two requests from the global community:

The demand for the relocation of the United Nations comes on the heels of a Palestinian flag flying at the General Assembly, to the consternation of one genocidalist Bibi Netanyahu.
Also, the formal call for the dumping of the US dollar and the massive gold repatriations are adding more injury to the bleeding Rothschild owned HSBC, the world’s largest drug money laundering machine according to Guinness.
HSBC is already asking the ECB for help. The ECB will in turn ask the Federal Reserve for assistance. 😉

Why Are Foreign Countries Repatriating Gold From US Federal Reserve?

17:06 02.09.2015(updated 17:39 02.09.2015)
Central banks of foreign countries resumed the withdrawal of their gold reserves from the US Federal Reserve, according to the last report by the last Fed reserve.
A massive repatriation of gold began back in the beginning of 2014.
During the period, a total of 250 tons of physical gold have been withdrawn from the Federal Reserve. The gold reserves in the depository dropped to 5,950 tons, a record low for the last 20 years.
Last time, a similar situation occurred ahead of the 2008 financial crisis, and foreign central banks withdrew nearly 400 tons of gold. Taking into account that the current withdrawal has lasted since 2014 and this year has been seeing a new crisis, history is repeating itself, Vesti.ru reports.
The first major attempts by foreign countries to return their gold reserves first began in 2012. At the time, Germany made attempts to withdraw its gold, but was denied examination and received only a small portion of the planned 700 tons.
Amid the ongoing global crisis, trust in the US Federal Reserve is waning. Its geopolitical role has become evident over the last years. Any announcement of the Fed’s intention to raise interest rates provokes destabilization in global financial and commodity markets, the article reads.
In addition, the Fed can bring serious pressure on the financial systems of the Euro area and other European countries, it adds.
Probably, even US allies secretly want to get rid of Fed’s influence and are looking for ways to do that. The recent gold withdrawal may be a step to achieve the goal, the article presumes.
In his open letter to the Commodity Futures Trading Commission, Keith Neumeyer, chairman of First Mining Finance, stressed that the actions of real-world producers and buyers are not determined by financial market operations which are conducted only on paper.
As China boosted its gold reserves to 600 tons, there is no reasonable ground to speak about the low demand for gold. In this situation gold prices should go up, but actually they do not, according to the article.
It turns out that while the market prices indicate that gold is unpromising, real customers continue to buy it in record amounts, it explains.
http://www.sputniknews.com/business/20150902/1026497535/countries-withdrawing-gold-from-us-fed.html

A leftist Russian MP wants the UN headquarters moved to a neutral country. Addressing the UN Secretary-General, Igor Zotov says the current host – the USA – is using its position to apply leverage against its political opponents.
“The benefits of the public discussion prompted by the initiative to move the UN headquarters are obvious. It will allow nations to get a different view of the UN’s place in the modern world and yet another time raise the question of fundamental problems in this organization and its adapting to modern realities,” Zotov (Fair Russia) writes in his letter, quoted by popular Russian daily Izvestia.
The lawmaker suggested that the decision to move the UN headquarters is made through a broad consensus of representatives of all UN member-countries, various activists and politicians and legal and political experts.
Zotov mentioned that the current placement of the UN offices allows the United States to manipulate the work of the General Assembly through “selective” access of other nations’ politicians to the working meetings of the body.
Deputy head of the State Duma Committee for International Relations, Leonid Kalashnikov, supported the idea, saying the Russian delegation to the UN could initiate the transition of the organization’s headquarters to a neutral country, such as Switzerland.
READ MORE: Top senator urges UN to punish nations that impose unilateral sanctions
The initiative was prompted by last week’s scandal in which US authorities issued a delayed and restricted visa to the chair of the Russian upper house, Valentina Matviyenko, who planned to attend an inter-parliamentary conference at UN headquarters and meet UN Secretary-General Ban Ki-moon in New York City. As a result, the entire Russian delegation had to cancel its participation in the event and the meeting between Matviyenko and Ban had to be postponed.
Russian Foreign Ministry expressed outrage over the US visa restrictions, saying Washington’s move had effectively derailed the Federation Council leader’s visit to an international conference hosted by a major global organization.
“The visa contains a number of unacceptable restrictions on Valentina Matviyenko’s stay in the United States,” the ministry said, adding that the American actions “constitute a flagrant violation of universally accepted norms of international law and are contrary to the obligations of countries hosting multilateral forums on their territory.”
Matviyenko herself said that Russia was against further confrontation, but noted that Moscow reserved the right to introduce reciprocal visa restrictions against US lawmakers, but such steps must be proportionate and reasoned.
LISTEN MORE:
[soundcloud url=”https://api.soundcloud.com/tracks/220651729″ params=”color=00cc11″ width=”100%” height=”166″ iframe=”true” /]

The military parade in Beijing on September 3, celebrating Japan’s surrender in World War II, is going to demonstrate some 500 units of China’s military hardware rolling across Tiananmen Square, accompanied by 12,000 troops.
The parade of the People’s Liberation Army (PLA) will last over an hour and together with 500 vehicles of 40 types it will showcase over 200 Air Force aircraft, according to local media.
Chinese authorities claim that up to 84 percent of the military hardware to take part in the parade has never been publicly presented before.
A parade rehearsal conducted in late August exposed that China is preparing to roll out at least three types of ballistic nuclear missiles on to Tiananmen Square.
One of them is the Dong Feng-21D (DF-21D) antiaircraft-carrier medium-range ballistic nuclear missile, capable of engaging a moving target out at sea with the help of the Yaogan satellite constellation, delivered to orbit in 2006-2014. China’s ‘Carrier-Killer’ has an alleged range of up to 2,000km and could be armed with either conventional explosives or a 300 Kt nuclear warhead.
Another missile expected to be on display on Thursday is the newest medium-range ballistic nuclear missile, the Dong Feng-26 (DF-26), a development from the DF-21. With a range of 3,500km it can reach foreign military bases, such as the island of Guam in the Pacific.
Also, Beijing is likely to present its newest strategic ballistic missile, the DF-5, which has an intercontinental range of 12,000km and could be armed either with a single, yet extensively powerful, 5 Mt nuclear warhead, or with 10-12 less powerful independently targetable warheads.

[soundcloud url=”https://api.soundcloud.com/tracks/216887321″ params=”color=00cc11″ width=”100%” height=”166″ iframe=”true” /] Xinhua news agency reports that altogether there will be seven types of missiles on show.
The agency also says that a new long range bomber will fly over the parade, along with other military aircraft: fighter jets, carrier-launched aircrafts, sea patrol aircrafts, tankers, assault helicopters etc.
For the first time in the history of Chinese military parades, female soldiers will march on Tiananmen Square.

Also for the first time, the event will be accompanied by a 2,400-strong PLA’s massed choir to sing some 30 songs during the parade.
Veterans of the China’s War of Resistance Against Japanese Aggression, fighting for independence of their country in 1930s-40s, with their average age in well in the 90s, will be brought to the parade on buses.

Just as in the Victory Day parade in Moscow this year, Chinese troops will not march alone in Beijing. Troops from Belarus, Cuba, Egypt, Kazakhstan, Kyrgyzstan, Mexico, Mongolia, Pakistan, Serbia, Tajikistan and Russia will join them. Each country will bring 75 servicemen to the Chinese capital.
Six more countries: Cambodia, Fiji, Laos, Vanuatu and Venezuela, will be represented by small units of up to seven soldiers.

Security no joke in #Beijing. Scanners, full body checks at every major #VDay #Parade venue. My report on air! pic.twitter.com/5vjXEnN8o9

Russia will be represented with 154th Commandant Regiment stationed in Moscow, which is expected to close the parade of the troops.
Not all world leaders extended an invitation are going to attend the Victory Day parade in Beijing. Leaders of the Western powers and NATO member states will not travel to China and are to be represented by lower-ranking officials and diplomats – apart from the Czech Republic, which will be presented by President Miloš Zeman.

Although Japanese Prime Minister Shinzo Abe was officially invited, he declined.
North Korean leader Kim Jong-un also declined the invitation, saying he will oversee a parade at home, while South Korean President Park Geun-hye will be in attendance.
Among other heads of state to come to Beijing are South African President Jacob Zuma, Pakistan’s President Mamnoon Hussain will also be present, as well as leaders of the four Central Asian states that are part of the China-based Shanghai Cooperation Organization (SCO).
Russian President Vladimir Putin will have a two-day visit to Beijing to conduct a number of meetings and sign about 30 official documents with the Chinese government. Already dubbed Beijing’s “main guest” at the event, Putin’s visit begins on the evening of September 2.
http://www.rt.com/news/314089-china-parade-troops-hardware/
All those large scale military exercises, the sheer number of which are truly unprecedented in any era before today, are meant to send a clear message that the East is capable of responding in kind and any miscalculation on the part of the adversary is not only stupid but will prove absolutely futile.
One of the significant sources of funds for the fascist Nazionist Jesuit Khazarian Mafia is the healthcare industry which registered a whopping $3.09 trillion in 2014, and is projected to soar to $3.57 trillion in 2017, in the US alone.
We can help take down the Dark Cabal by avoiding drugs, defeat any viral attack and scaremongering easily by knowing how to build our own comprehensive antiviral system. Find more about it here.