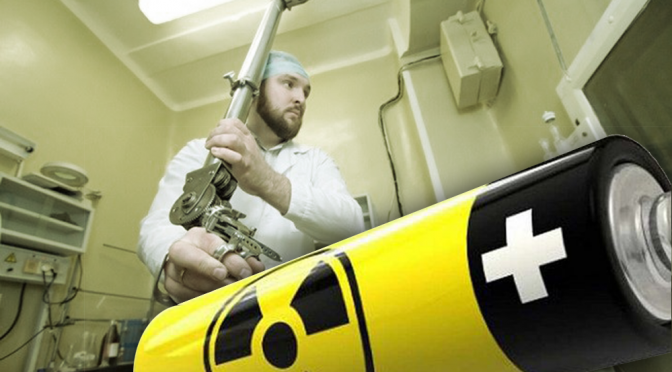 After the groundbreaking announcement of an industrial method to transmute elements into gold and silver, or any materials for that matter, in 2016 [here], Russian scientists have been pushing the boundaries of nuclear miniaturization in the last few years by designing, and recently by successfully producing a pocket-sized nuclear battery that can power portable devices for decades without recharging, with as much as 10 times the energy capacity of its predecessor!
According to a recent publication by the Nuclear Engineering International,

“Russia’s Mining and Chemical Combine (MCC) announced on 18 December that it has achieved a world first in the conversion of highly enriched Nickel-63 (Ni-63) for integration into an atomic battery with a lifetime of 50 years.
MCC (part of state nuclear corporation Rosatom) has completed the next stage in the process of creating a beta-voltaic power source using Ni-63 by converting a working gas enriched for Ni-63 to a form suitable for drawing on the semiconductor converter. The delivery of the appropriate components for the deposition of Ni-63 and the final assembly of a prototype atomic battery is now imminent. The converter is based on a new design, which qualitatively increases the efficiency of all components.
MCC is acting as a system integrator for this project, implementing a set of breakthrough technologies. MCC organised work in two directions: obtaining the highly enriched Ni-63 isotope (which involved more than ten stages) and creating a special semiconductor converter (more than ten stages). To implement the project, a number of technologies were redeveloped, in particular: the production of working gas from radioactive nickel-63 for enrichment in centrifuges, the production of reagents for the production of working gas, and the conversion of enriched nickel-63 gas to solid compounds for deposition on a semiconductor. The scientific and technical solutions involved in the isotope production have no analogues and will be protected by patents in Russia and abroad, MCC said.
The project has resulted in the revival of a number of industries. The Electrochemical Plant (ECP in Zelenogorsk, Krasnoyarsk Territory) put into operation an appropriate cascade of centrifuges which had previously shut down by fuel company Tvel (part of Rosatom) for economic reasons.
Power sources based on highly enriched Ni-63 along with the new converter design have made possible the design of a new-generation devices in the field of cybernetics and AI, where miniaturised sources of this type will be able to imitate the activities of brain neurons, MCC said. They should not be considered as an alternative to lithium batteries. This is a new type of device that will become the basis for a new architecture of electronic equipment.
Compact “atomic batteries” with a lifetime of up to 50 years will find a use in instrument-making and radio electronics (miniaturisation and reduction of energy consumption), and will be in great demand in devices and systems where replacement of power sources is difficult, costly or unsafe, said Tvel. Potential applications are space technology, medicine (current sources for cardiac implants and other biostimulants), telecommunications equipment, military-industrial complex products, industrial and infrastructure facilities.
Tvel explained that the nickel-63 was made by irradiating stable nickel-62 in the IVV-2M research reactor at the Institute of Reactor Materials (Sverdlovsk branch of the NN Dollezhal Research & Development Institute of Power Engineering (Nikiet). The VG Khlopin Radium Institute in St Petersburg undertook radiochemical purification of the irradiated material and synthesised the working gas, which was then at ECP.
In 2019, specialists at ECP, as part of their research and development, plan to achieve an enrichment Ni-63 isotope to a level of more than 80%. The initial nickel-62 for this is currently being irradiated in an RBMK-1000 power reactor at the Leningrad nuclear plant.”
https://www.neimagazine.com/news/newsrussia-to-use-highly-enriched-ni-63-for-atomic-batteries-6907100


Advances in nuclear engineering have enabled the release of safer designs that prevent runaway nuclear radioactivity. The nuclear fission-fusion hybrid emits no nuclear radiation at all, as the system itself converts radioactivity back to usable energy in real time.
This particular project was inaugurated in about the same time when we started hearing from Putin to “dump the dollar”,

“At the research nuclear reactor of TPU we will receive isotope nickel-63 from isotope nickel-62. This is unstable isotope, a pure beta-emitter with low energy radiation and relatively long half-life. Based on it a nuclear battery is possible to create that lasts 50 years,” told Igor Shamanin, head of Department of Engineering Physics at TPU, to RIA Novosti.
The development of the nuclear battery based on energy of “soft” beta-half-life of nickel-63 isotope  is a joint project of Mining and Chemical Combine and Siberian State Aerospace University. The project won a competition of the Ministry of Education and Science of the Russian Federation. Outcomes of the project will allow creating a new generation in autonomous radioelectronics and medical engineering.
Igor Shamanin pointed out that reliable long lasting power supplies were in great demand. For instance, such power supplies are required at space satellites.
“Currently they are energized by cumbersome solar batteries. They are cranky, poorly protected, for example, from meteor rain. The nuclear battery is very portative, generate electricity during 50 years – and the satellite operates independently whether it is in the shadow or not,” – described the situation the scientist. According to him such power cells can be used as batteries in cardiostimulators. – RT.com

These free energy technologies have been around for more than a century at least, but the oil and banking cartels have been hammering these technologies down to preserve their privileged positions. Suppression ranges from intimidation to the outright disappearance and deaths of free energy pioneers.
The other entity that doesn’t want free energy to become mainstream is the Vatican Empire, which loses its fundamental grip on the mental faculties of its subjects once the people start to question the Creation Theory itself.
Incidentally, Putin is also against a religion of mind control, even going to the extent of calling Pope Francis as “not a Man of God.”