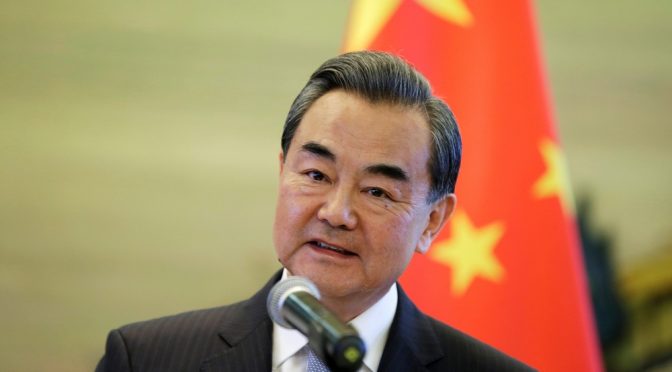 In a sign that the US continues to lose control over Philippines’ foreign policy, “China’s foreign minister on Tuesday said he supported the idea of joint energy ventures with the Philippines in the disputed South China Sea.
Wang Yi, on a two-day visit to Manila, made the remarks after President Rodrigo Duterte on Monday said a partner had been found to develop oil fields and exploration and exploitation would restart this year.
The Energy Ministry on July 12 said drilling at the Reed Bank, suspended in 2014, might resume before year-end, and the government was preparing to offer new blocks to investors in bidding in December.
“In waters where there are overlapping maritime rights and interests, if one party goes for unilateral development, and the other party takes the same action, that might complicate the situation at sea,” Wang said.  (Reuters)
Wang visited the Philippines less than a year after President Rodrigo Duterte met with Chinese President Xi Jinping in China, and less than a month after Cayetano also went to China to meet with Wang.

“I hope that the two sides could make the decision so that the goodwill embodied by Mr Deng Xiaoping’s proposal 31 years ago could lead to fruition today and could benefit the people of both countries,” he said.

Cayetano on Tuesday also talked about Duterte’s statement on joint development with China.
Duterte made mention of the special relationship between China and Philippines during his State of the Nation address.