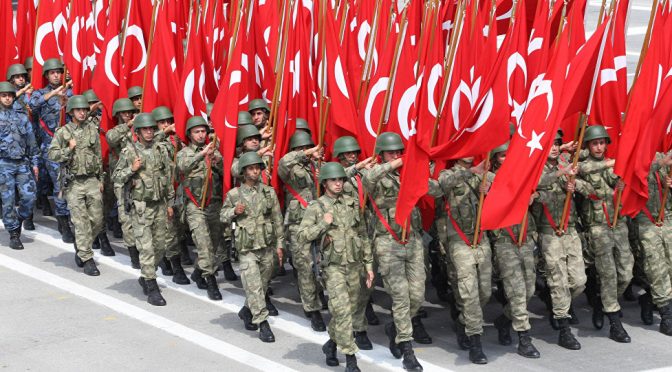 A major and far-reaching shift in military alliances is unfolding.
While Turkey is still “officially” a member of NATO, president Recep Tayyip Erdoğan has been developing “friendly relations” with two of America’s staunchest enemies, namely Iran and Russia. 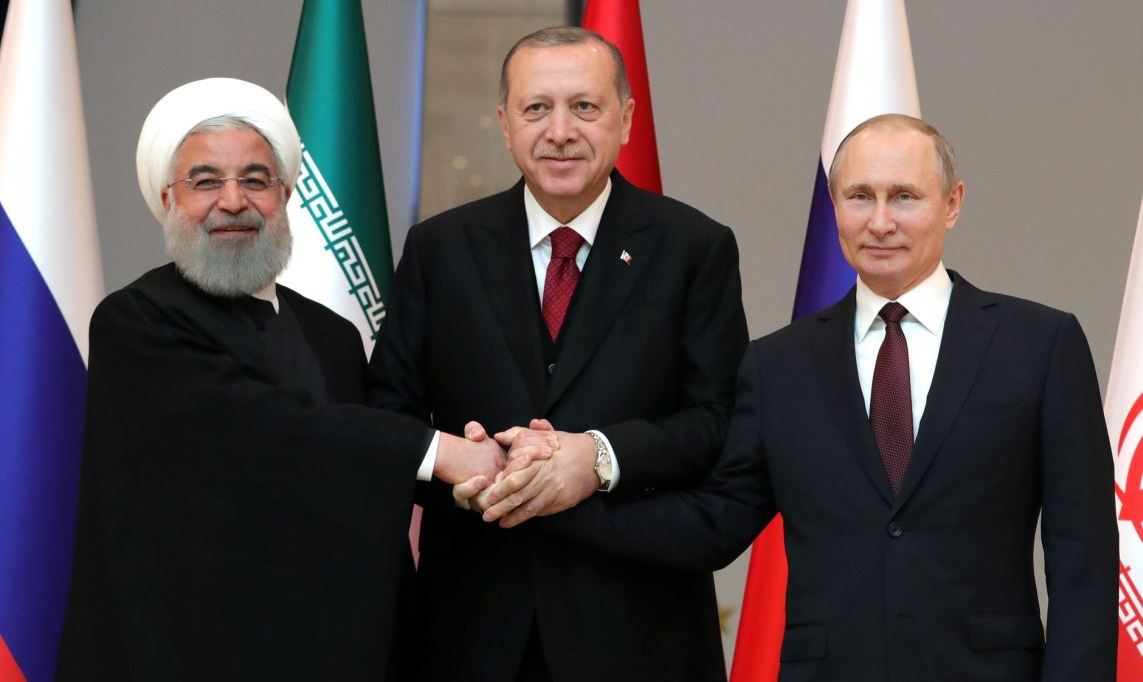 US-Turkey military cooperation (including US air force bases in Turkey) dates back to the Cold War. Today Turkey is sleeping with the enemy. And Trump has (“rhetorically”) declared war on Turkey.
We are ready for war,  says President Erdogan.
“The secret to successful states is their readiness for war. We are ready with everything we have,” (Erdogan’s statement on August 12, meeting with ambassadors in Ankara)
Erdogan also accuses the US of waging a “financial warfare” against Turkey.
Turkish banks are under attack. In turn, a banking crisis is unfolding in the European Union largely hitting EU banks which hold substantial portions of Turkey’s debt.
According to Turkey’s president:

“It is everyone’s observation that the developments in foreign currency exchange have no financial basis and they are an attack on our country… On the one hand you are a strategic ally and the other you shoot (the country) in the foot. Is something like this acceptable?” (Ahvalnews)

While the media has its eyes riveted on the collapse of the Turkish Lira (which so far in 2018 has lost approximately 40 percent of its value in relation to the US dollar), NATO is in a state of disarray, with one of its member states “at war” with another member state, namely the United States of America.
Turkey by a long shot has the largest conventional forces (after the US) within NATO outpacing France, Britain and Germany, (not to mention its tactical B61 nuclear weapons capabilities).
#NATOExit
Broadly speaking, the US-Turkey rift and its implications for the Atlantic Alliance are either ignored or trivialized by the media. The entire structure of military alliances is defunct. NATO is in a shambles. 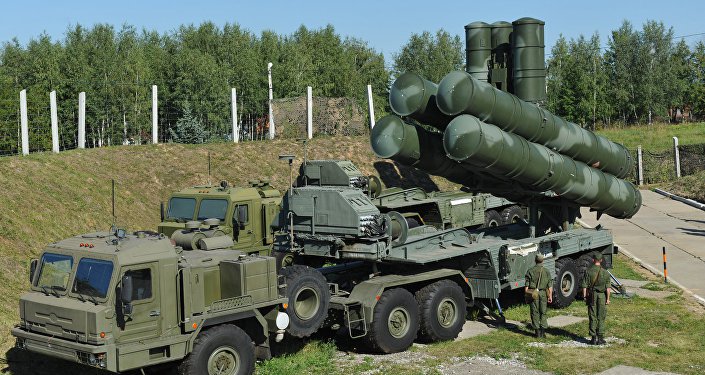 Turkey is to acquire Russia’s state of the art S-400 air defense system. Why? Does this mean that Turkey which is a NATO member state will withdraw from the integrated US-NATO-Israel air defense system? Such a decision is tantamount to NATOExit.

“On  July 26, the US Congress decided to ban the shipment of F-35 aircraft to Turkey unless  Ankara refused to purchase S-400 anti-aircraft systems from Russia.” (Pravda)

The US-Turkey-Israel “Triple Alliance” is Also Defunct
In 1993, Israel and Turkey signed a Memorandum of Understanding leading to the creation of (Israeli-Turkish) “joint committees” to handle so-called regional threats. Under the terms of the Memorandum, Turkey and Israel agreed “to cooperate in gathering intelligence on Syria, Iran, and Iraq and to meet regularly to share assessments pertaining to terrorism and these countries’ military capabilities.”


The triple alliance was also coupled with a 2005 NATO-Israeli military cooperation agreement which included “many areas of common interest, such as the fight against terrorism and joint military exercises.”  These military cooperation ties with NATO were viewed by the Israeli military as a means to “enhance Israel’s deterrence capability regarding potential enemies threatening it, mainly Iran and Syria.”
The “triple alliance” linking the US, Israel and Turkey was coordinated by the US Joint Chiefs of Staff. It was an integrated and coordinated military command structure pertaining to the broader Middle East. It was based on close bilateral US military ties respectively with Israel and Turkey, coupled with a strong bilateral military relationship between Tel Aviv and Ankara. In this regard, Israel and Turkey have been close partners with the US in planned aerial attacks on Iran since 2005. (See Michel Chossudovsky, May 2005)
Needless to say, that triple alliance is defunct. With Turkey siding with Iran and Russia, it would be “suicide” for US-Israel to even consider waging aerial attacks on Iran.
Moreover, the NATO-Israel 2005 military cooperation agreement which relied heavily on the role of Turkey is dysfunctional.
What this means is that US-Israeli threats directed against Iran are no longer supported by Turkey which has entered into an alliance of convenience with Iran.
The broader Realignment of Military alliances
The shift in military alliances is not limited to Turkey. Following the rift between Qatar and Saudi Arabia, the Gulf Cooperation Council (GCC) is in disarray with Qatar siding with Iran and Turkey against Saudi Arabia and the UAE. Qatar is of utmost strategic significance because it shares with Iran the world’s largest maritime gas fields in the Persian Gulf. (see map below) 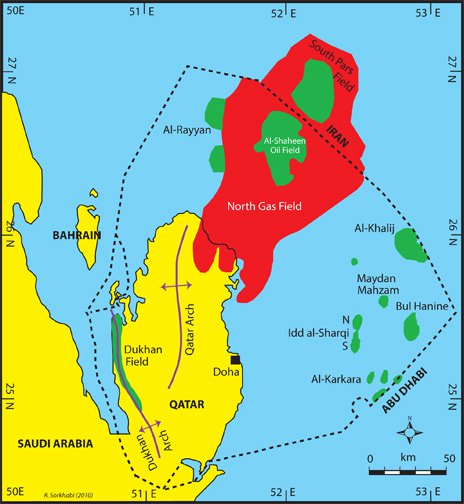 The Al-Udeid military base near Doha is America’s largest military base in the Middle East. In turn, Turkey has now established its own military facility in Qatar.
The Shanghai Cooperation Organization (SCO)
A profound shift in geopolitical alliances is also occurring in South Asia with the instatement in 2017 of both India and Pakistan as full members of the Shanghai Cooperation Organization (SCO).  Inevitably, this historic shift constitutes a blow against Washington, which has defense and trade agreements with both Pakistan and India. “While India remains firmly aligned with Washington, America’s political stranglehold on Pakistan (through military and intelligence agreements) has been weakened as a result of Pakistan’s trade and investment deals with China.”  (Michel Chossudovsky, August 1, 2017)

In other words, this enlargement of the SCO weakens America’s hegemonic ambitions in both South Asia and the broader Eurasian region. It has a bearing on energy pipeline routes, transport corridors, borders and mutual security and maritime rights.
Pakistan is the gateway to Afghanistan and Central Asia, where US influence has been weakened to the benefit of China, Iran and Turkey. China is involved in major investments in mining, not to mention the development of transport routes which seek the integration of Afghanistan into Western China.
Where does Turkey fit in? Turkey is increasingly part of the Eurasian project dominated by China and Russia. In 2017-18, Erdogan had several meetings with both president Xi-Jingping and Vladimir Putin. Erdogan has been contemplating becoming a member of the SCO since 2016 but sofar nothing concrete has emerged.
The Antiwar Movement: #NATOExit People’s Movement
Of crucial significance, the crisis within NATO constitutes a historic opportunity to develop a #NATOExit people’s movement across Europe and North America, a people’s movement pressuring governments to withdraw from the Atlantic Alliance, a movement to eventually dismantle and abolish the military and political apparatus of the North Atlantic Treaty Organization.
Written by: Prof Michel Chossudovsky | Global Research, August 21, 2018