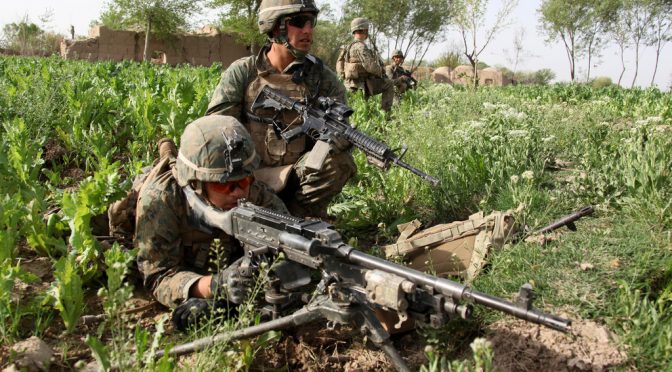 In December 2019, the Washington Post released a reviews of The Afghanistan Papers. A series of interviews and documents “compiled in secret” and then the subject of a “legal challenge” from the US government.

The WaPo baldly called it: “A secret history of the war”. But there’s nothing here that’s really secret, and very little actual history. What do they tell us? Absolutely nothing, except what we’re supposed to believe.” ( Kit Knightly, December 20, 2019)

What is the unspoken “secret truth” which has not been featured in the Afghanistan Papers? The 2001 US-NATO invasion of Afghanistan sustains the surge in heroin and opioid addiction in the United States.

The following article (first published in December 2018) is brought to the attention of Global Research readers as a contribution to the June 26 2020 United Nations “global observance to raise awareness of the major problem that illicit drugs represent to society”. Michel Chossudovsky, June 25, 2020

You can avoid the 2019-nCov panic right now by exploring what a suppressed full-spectrum antiviral technology can do for you, and your family.

Afghanistan’s opium economy is a multibillion dollar operation which has a direct impact on the surge of  heroin addiction in the US.

Despite president Trump’s announced US troop withdrawal, the Afghan opium trade continues to flourish. It is protected by US-NATO occupation forces on behalf of a nexus of powerful financial and criminal  interests.

Today a rough estimate based on US retail prices suggests that the global heroin market is above the 500 billion dollars mark. This multibillion dollar hike is the result of a significant increase in the volume of heroin transacted Worldwide coupled with a moderate increase in retail prices.

Based on the most recent (UNODC) data (2017) opium production in Afghanistan is of the order of 9000 metric tons, which after processing and transformation is equivalent to approximately 900,000 kg. of pure heroin.

With the surge in heroin addiction since 2001, the retail price of heroin has increased. According to DEA intelligence, one gram of pure heroin was selling in December 2016 in the domestic US market for $902 per gram.

The Heroin trade is colossal: one gram of pure heroin selling at $902 is equivalent to almost a million US dollars a kilo ($902,000) (see table below)

In 2000, the Taliban government with the support of the United Nations implemented a successful drug eradication program, which was presented to the UN General Assembly on October 12, 2001, barely a week after on the onset of US-NATO invasion. Opium production had collapsed by 94 percent.

The Afghan government’s drug eradication program was repealed.  The 2001 war on Afghanistan served to restore as well as boost the multibillion dollar drug trade. It has also contributed to the surge in heroin addiction in the US.

Opium production had declined by more than 90 per cent in 2001 as a result of the Taliban government’s drug eradication program.

Immediately following the invasion (October 7, 2001) and the occupation of Afghanistan by US-NATO troops, the production of opium regained its historical levels.

In fact the surge in opium cultivation production coincided with the onslaught of the US-led military operation and the downfall of the Taliban regime. From October through December 2001, farmers started to replant poppy on an extensive basis.” (see Michel Chossudovsky, op cit.)

Heroin Addiction in the US

Since 2001, the use of heroin in the US has increased more than 20 times. Media reports rarely report how the dramatic increase in the global “supply of heroin” has contributed to “demand” at the retail level.

There were 189,000 heroin users in the US in 2001, before the US-NATO invasion of Afghanistan. By 2012-13, there were 3.8 million heroin users in the US according to a study by Columbia University Mailman School of Public Health. Extrapolating the 2012-2013 figures (see graph below), one can reasonably confirm that the number of heroin users today (including addicts and casual users) is well in excess of four million.

“My Administration is committed to fighting the drug epidemic” says Donald Trump.

Those lives would have been saved had the US and its NATO allies NOT invaded and occupied Afghanistan in 2001.

The first thing they did was to undermine the drug eradication program, restore the opium economy and the drug trade.

Opium production has increased 50 times in relation to 2001 (following the Afghan government’s drug eradication program). In 2001, the areas of opium cultivation had fallen to 8000 hectares (185 metric tons of opium).

According to the UNODC, Afghanistan produces (2007) 93% of the illegal “non-pharmaceutical-grade opiates” namely  heroin.

The 2017 Afghanistan Opium Survey (released in May 2018) by UNODC confirms that the farm areas allocated to opium are of the order of 328,000 hectares with opium production in excess of 9,000 tons.

War is good for business. It contributed to spearheading heroin use. The Afghan opium economy feeds into a lucrative trade in narcotics and money laundering.

It is worth noting that in 2010 UNODC modified the concepts and figures on opium sales and heroin production, as outlined by the  European Monitoring Centre for Drugs and Drug Addiction (EMCDDA).

“UNODC estimates that a large proportion of the Afghan opium harvest is not processed into heroin or morphine” (UNODC, 2010a). …EU drug markets report: a strategic analysis, EMCDDA, Lisbon, January 2013 emphasis added.

What this new methodology has done is to obfuscate the size and criminal nature of the Afghan drug trade, intimating –without evidence– that up to 20% of Afghan opium is no longer channeled towards the illegal heroin market.

More than Half a Trillion Dollars

The profits are largely reaped at the level of the international wholesale and retail markets of heroin as well as in the process of money laundering in Western banking institutions, an issue which is not addressed by the Vienna based UNODC.

The global monetary value of the heroin market (which is protected by powerful groups) is colossal.

The retail price of heroin (sold by the gram) can vary dramatically from one country to another, it also depends on the percentage of pure heroin. This does not facilitate the process of estimating the monetary value of the global trade in heroin.

Recorded retail street prices for heroin with a low level of purity must be converted to a dollar value which corresponds to pure heroin.

What is sold at the street level usually has a low percentage of pure heroin. The process of estimation requires transforming the street level prices into what the DEA calls heroin price per gram pure (PPG)

The estimated price per gram of pure heroin, however, is substantially higher.

Heroin Prices in the UK

In the UK which is the entry point of Afghan heroin into the EU market, the recorded retail price (according to a 2015 estimate quoted by the Guardian) is consistent with that estimated for the US market by the DEA:

The global monetary value for heroin can be roughly estimated using the US price equivalent PPG measurement for pure heroin of US 902,000 a kg. (December 2016, DEA) and the (lower) production figure of 790,000 kg of pure heroin (estimated by the UNODC).

This is a conservative estimate based on adopting the “lower figure” of 7900 metric tons (2017)  (recommended by the UNODC methodology which is arbitrary and questionable, see above).

If we had based the calculation on the total production of opium which is in excess of 9ooo metric tons (2017), the global monetary value of the heroin market would have been in excess of $800 billion. It should also be mentioned that this estimate relies solely on the the US price for pure heroin (DEA).

Back in August 2018, President  Trump signed the 2019 National Defense Authorization Act “which authorizes a top-line [defense] budget of $717 billion”, just a few million dollars in excess of the estimated global monetary value of the Afghan heroin market.

The global monetary value of the heroin market is of the same order of magnitude as the defense budget of the USA.

Needless to say, the Pentagon not to mention the CIA which launched the opium economy in Afghanistan in the late 1970s  are intent upon protecting this multibillion dollar industry. The proceeds of the Afghan drug trade were initially used to finance the recruitment of Al Qaeda Mujahideen mercenaries to fight in the Soviet-Afghan war.

Michel Chossudovsky is an award-winning author, Professor of Economics (emeritus) at the University of Ottawa, Founder and Director of the Centre for Research on Globalization (CRG), Montreal, Editor of Global Research. He has taught as visiting professor in Western Europe, Southeast Asia, the Pacific and Latin America. He has served as economic adviser to governments of developing countries and has acted as a consultant for several international organizations.