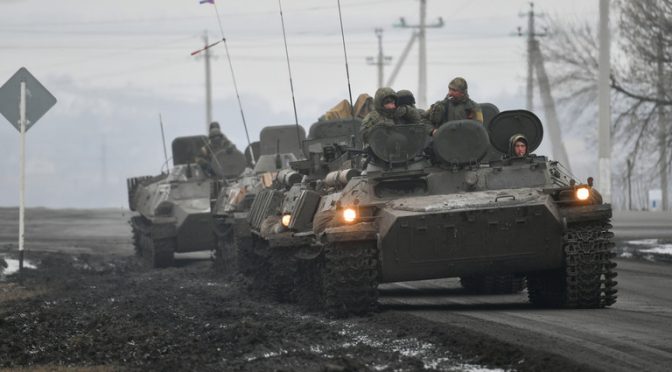 The genius of Grandmaster Vladimir Putin’s bold “demilitarization and deNazification” special military operation in Ukraine is beginning to unravel.

In his 2007 Munich Security Conference Speech, Vladimir Putin lamented what he called the “United States’ monopolistic dominance in global relations,” and its “almost uncontained hyper use of force in international relations,” which resulted to the situation where “no one is safe anymore.”

For years, the reality on the ground was contrary to what has been said about “NATO not moving even a square inch eastward.”

Today, however, the entry of the 60 km long column of Russian military hardware and personnel should give us the idea that the Russians are not in Ukraine just to make a highfalutin statement, but to actually recover those “few inches” that NATO has acquired for itself systematically after the fall of the USSR in 1991.

Clearly, the options are theoretically unlimited considering the dire economic and political conditions that the US and EU are actually experiencing right now.

There’s also that big question as to how the military organizations in these countries can have the necessary motivation to wage another war after decades of fighting mindlessly in the Middle East and be defeated by grossly ill-equipped groups like the Taliban, and the forced mRNA experimental vaccinations that they were all subjected to after serving their country the best way they can.

Will they be able to defeat an army that is committed to the security of a country that has a standing record of defeating the more well-equipped fascist fanatics in WW2, and has in fact the moral high ground to do it again because it is in defense of millions who are subjected to a systematic genocide by the same Nazi ideologues who forcefully embedded themselves into the Ukrainian military and society at large?

No, the Western armed forces won’t be able to fight like heroes they all think they are, and that explains in part why talkingheads like Biden, UK and EU politicians cannot and will not be sending troops to Ukraine ever, and all scheduled nuclear tests are now put on hold to “avoid sending the wrong message to Russia. “

NATO, for its part, is just an office with carefully arranged flagpoles, but without a standing army of its own. In short, it’s all bark and no bite — such is the illusory foundation of Deep State power that’s causing all these troubles.

In the last 48 hours, observers worldwide are asking what is really happening with the 60km long Russian military column stalling, and this could be explained by the war planners updating their overall objectives now that the situation is much clearer to assess. Because we have to consider: the Russian military is not using the same Toyota pickups that the US State Department issued to the ISIS in its entry to Syria.

After all the civilians have temporarily relocated themselves to Poland, and neighboring countries, the Russian forces could just advance themselves to those same borders, and establish a new demarcation line by which the reentry of Ukrainians, free of Nazi elements and ideology, will be established in the future.

Of course, such reentry could happen only after all the Nazi hardliners are totally eradicated from the residential areas and government installations conducting their own false flag operations in Ukraine, filming them for CNN as the White Helmets have done in Syria. Giving them Nazis an Oscar trophy, too, would be Hollywood overstretching its imaginary credibility.

So, it’s not just somebody’s wet dream to outline the following:

Russia’s divorce from Europe looks to be over and along with it is the birth of our much anticipated Multipolar World.

At the time of writing the war in Ukraine has been going on for a handful of days and thanks to the power of hypersonic missiles and the fact that the majority of Ukraine’s southern and eastern populations see themselves as Russian, Kiev is utterly broken. Russian and LPR/DPR forces are taking and holding many kilometers per day and now Zelensky is willing to go to the negotiation table after 8 years of pleas from Moscow begging Kiev and the West to stop the genocide in the Donbass. Russia is being cut from SWIFT and every Russian bank and individual of note is being sanctioned. Russia’s divorce from Europe looks to be over and along with it is the birth of our much anticipated Multipolar World. Given this context what should Russia do at this moment in history?

It is time for Moscow to negotiate with Warsaw and Budapest, not Kiev.

Kiev was unwilling to negotiate for 8 years, they took that time to ban the Russian language while torturing and murdering locals out east, now they are clearly awaiting some NATO aircraft and other goodies in the hope to change the tide of the war at least psychologically. Meeting and discussing anything with them is pointless and only serves Kiev’s interests. If Russia has finally declared them a “Fascist Regime” then there is no room for negotiations, they have to be broken.

Russia has already declared the Donbass Republics to be independent, but Kharkov and Odessa should not be punished for rising up unsuccessfully as they did in 2014, their independence movements were and are just as valid as the Donbass’ and the Russians should conveniently acknowledge any such movement within these oblasts as independent nation states. Moscow has heavily invested in ending the genocidal nightmare to the south and should have zero shame in taking what they consider theirs and making sure that history doesn’t repeat itself. Everything east of the Dnepr and south of the northernmost tip of the Moldovan-Ukrainian border should be declared independent, i.e. de facto Russian immediately.

If Kiev moves to Lvov the problem of having a Russophobic Murderous Banderite Regime next door will not go away. Russia should appeal to Poland’s Narcissism and Hungary’s Pragmatism and offer every Russophobic square meter of the remainder of Ukraine to them, with a possible chunk going to Romania for historical reasons. This offer will create an interesting wave of reaction within the EU/NATO. The Poles have dreamed of expansion, especially taking back Lvov for quite some time and it will be interesting to see the mental gymnastics that their leadership will have to do when Washington tries to forbid the move.

Poland is Russophobic, but not insane. Having a very elongated Hungary closer to Russia will allow Moscow and Budapest to engage in further cooperation and Hungarian identity does not rest on hating Russians. Two-thirds of the fake nation of Ukraine can go to the Russians and one-third can go to bordering NATO members. The Ukrainian experiment needs to come to a final end and be deleted from the map entirely.

Russian patriotic economists can now put all of our money where their mouths have been for decades.

Russia has always had the threat of economic isolation thrown at it as a form of punishment. This has caused the Kremlin to tolerate a lot of seemingly odd policies and institutions. Strange figures like Anatoly Chubais, Elvira Nabiullina and Alexei Kudrin have the public perception of pursuing Globalist interests on Russia’s kopeck yet have been tolerated over and over again. The Russian Central Bank which is somehow both private and responsible to the government, the former seeming to be the dominant policy, may also no longer be required. If Russia is truly on its own then it is time to “Make the Ruble Russian Again”.

Text: “Sergey Glazyev: Our Economy is Subordinate to Foreign Powers”.

Various Patriotic and YouTube star economists including, Katasonov, Hazin, Delyagin, and most importantly godfather of the Eurasian Economic Union Sergey Glazyev, can now have free reign to finally enact the policies they have wanted to do for countless years. Glazyev’s ideas are very complicated but in short they focus on having Russia’s economy, resources and currency serve Russia itself and follow in the footsteps of some of China’s most successful projects. Whether this will work or not is a question of time, but now with the new found economic freedoms in Russia these “patriotic economics” can finally be attempted or at the very least the Central Bank can be reformatted. #EndTheFed.

For years Russia has had to really restrain itself in terms of how it projects government funded media as they feared by being banned. One complaint to Ofcom could be enough to get an entire project shutdown all over the UK. Well now that RT, Sputnik and everything else have been banned regardless of their actions, there is no point in walking on eggshells anymore.

RT: Now has a lot more freedom to express itself.

Russia’s foreign media was always forced to project itself through a Liberal prism in order to play ball. Now they must do the exact opposite and “play to the base” of Conservatives and Traditionalists who are willing to download Telegram, make a VK account and scour other resources to continue to maintain contact with Russia’s English-Language Media.

RT, Sputnik and the others must adjust to hold onto and expand the audience that agrees with them despite the difficulties with all the blanket banning. For years I have urged Russian media figures to take a turn to the Right, especially under my leadership, now we may just have our chance, which comes at a great time as my car is getting quite old.

The shackles of compromise have been lifted. If Russia can survive economically it no longer has to listen to the nagging of the “International Community” or try to force its culture and especially economy to fit inside of a Liberal box. This is a major opportunity for things to be different, and for those who believe in Lev Gumilyov’s Passionarity Theory of History this all comes at a great moment of military triumph. This is the opportunity that Russian patriotic forces have dreamed of for quite some time, now they have to pick up the ball and not completely blow this.