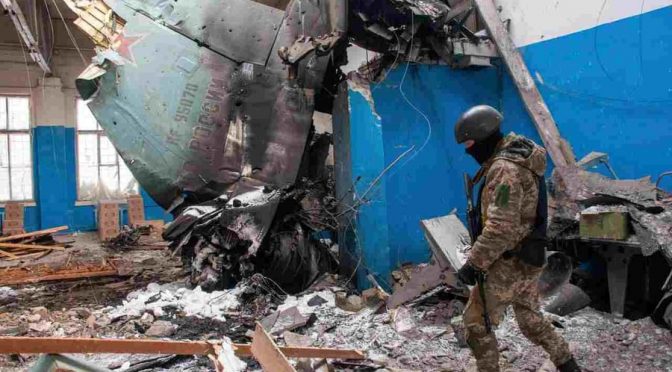 During his recent four-day European tour, U.S. President Joe Biden made headlines when, during a meeting with Polish President Andrzej Duda, he described Russian President Vladimir Putin as “a man who I quite frankly think is a war criminal,” adding “I think it will meet the legal definition of that as well.”

Putin’s spokesperson, Dmitry Peskov, condemned Biden’s comment as “unacceptable and unforgivable rhetoric on the part of the head of a state whose bombs have killed hundreds of thousands of people around the world.”

Biden made his remarks following a statement issued by Secretary of State Antony Blinken in which Blinken announced that the State Department had made a formal assessment that the Russian military had committed war crimes in Ukraine. “Based on information currently available,” Blinken said, “the U.S. government assesses that members of Russia’s forces have committed war crimes in Ukraine. “Our assessment,” Blinken added, “is based on a careful review of available information from public and intelligence sources.”

According to Blinken, “Russia’s forces have destroyed apartment buildings, schools, hospitals, critical infrastructure, civilian vehicles, shopping centers, and ambulances, leaving thousands of innocent civilians killed or wounded. Many of the sites Russia’s forces have hit have been clearly identifiable as in-use by civilians.” Blinken declared that this category “includes the Mariupol maternity hospital” as well as “a strike that hit a Mariupol theater, clearly marked with the Russian word for ‘children’ — in huge letters visible from the sky.”

Blinken’s accusations echo those made by the Ukrainian government and organizations such as Amnesty International. Karim Khan, the lead prosecutor for the International Criminal Court, has announced that his office will begin investigating allegations of Russian war crimes committed during its ongoing military operation in Ukraine.

The narrative that paints Russia and the Russian military as perpetrators of war crimes, however, runs afoul of actual international humanitarian law and the laws of war. The issue of jus in bello (the law governing conduct during the use of force) set forth a framework of legal concepts which, when allied to specific actions, help determine whether an actual violation of the law of war has occurred.

Jus in bello is derived from treaties, agreements, and customary international law. Two sets of international agreements, the Hague Conventions of 1899 and 1907, and the four Geneva Conventions of 1949, serve as the foundation for the modern understanding of jus in bello, regulating, respectively, what is permissible in the execution of war, and the protections provided to non-combatants, including civilians and prisoners of war. “Grave breaches” of jus in bello can be prosecuted in courts of relevant jurisdiction as war crimes.

Starting from the proposition that war is little more than organized murder, the issue of how to define what constitutes murder sufficient to be categorized a being of a criminal nature is far more difficult that one might think. Michael Herr gave voice to this reality in his book, Dispatches, about America’s war in Vietnam, when he observed that, “Charging a man with murder in this place was like handing out speeding tickets at the Indy 500.”

One of the key considerations that distinguishes a legitimate act of war, and a war crime, is the notion of “military necessity.” According to the precepts set forth in the law of war, military necessity “permits measures which are actually necessary to accomplish a legitimate military purpose and are not otherwise prohibited by international humanitarian law. In the case of an armed conflict the only legitimate military purpose is to weaken the military capacity of the other parties to the conflict.”

Working hand in glove with the concept of military necessity is the issue of “humanity”, namely that a military operation cannot inflict suffering, injury, or destruction that is not necessary to accomplish a legitimate military objective. While “humanity” is difficult to define (is there ever a humane way to take a human life during war?), it does relate to another principle of international humanitarian law, “proportionality.”

Proportionality in wartime has yet to be strictly codified, but in basic terms it revolves around “the idea that military means should be proportionate to their anticipated ends.”

In short, if there is an enemy sniper in a room on the third floor of an apartment building, proportionality would be met if the force necessary to eliminate the sniper in the room in question was used; if there were any civilians in the room at the time, this would not constitute a violation of the laws of war, as the civilians would unfortunately (and tragically) fall under the notion of “collateral damage.”

If, however, force is applied that results in the destruction of the entire apartment complex, killing scores if not hundreds of civilians, then a case could be made that the use of force was disproportionate to the expected military result, and as such constitutes a war crime.

The final principle of note is that of “distinction”, which holds that parties to an armed conflict must “at all times distinguish between the civilian population and combatants and between civilian objects and military objectives and accordingly shall direct their operations only against military objectives.” Distinction prohibits “indiscriminate attacks and the use of indiscriminate means and methods of warfare,” such as carpet bombing, or an artillery bombardment which lacked a specific military purpose.

From these basic precepts and principles, the international community has codified specific acts that constitute war crimes in the form of the Rome Statute of the International Criminal Court, in particular Article 8 (War Crimes). Here we find enumerated various actions which give rise to most, if not all, of the accusations made by Biden and Blinken when leveling their accusations of war crimes at Putin and the Russian military:

Each of the crimes listed above consist of two elements, each of which must be proved as a matter of law, before the accusation of a war crime can be cognizable. These are the physical element, or actus reaus, namely the act itself, and the mental element, or mens rea, which constitutes specific intent, or dolus specialis, to commit the act in question.

Even if you can prove the physical element of an alleged crime, such as the bombing of a hospital or apartment complex, unless one can prove the actual intent behind the attack (i.e., not just directing attacks against a civilian population, but rather intentionally directing these attacks), no crime has been committed.

One of the main mitigating circumstances against most alleged war crimes is the principle of “military necessity.” Take, for example, the act of bombing a hospital. If a bomb strikes a hospital, one has established de facto actus reas. Now, let’s say there exists a written order from a commander to a pilot ordering the pilot to bomb the hospital in question—dolus specialis has now been established, and a war crime has been committed.

While the law of war prohibits direct attacks against civilian targets, such as housing, schools, and hospitals, as the International Committee of the Red Cross makes clear, “a hospital or school may become a legitimate military target if it contributes to specific military operations of the enemy and if its destruction offers a definite military advantage for the attacking side,” or if it is “being used as a base from which to launch an attack, as a weapons depot, or to hide healthy soldiers/fighters.”

Herein lies the rub. “Increasingly,” a recent article published in The Washinton Post noted, “Ukrainians are confronting an uncomfortable truth: The military’s understandable impulse to defend against Russian attacks could be putting civilians in the crosshairs. Virtually every neighborhood in most cities has become militarized, some more than others, making them potential targets for Russian forces trying to take out Ukrainian defenses.”

The bottom line is that if Russia has intelligence that Ukraine is using an otherwise protected civilian target for military purposes, and if a decision is made to attack the target using force deemed proportional to the threat, then no war crime has been committed.

Indeed, given what The Washington Post has documented, it appears that it is Ukraine, not Russia, which is committing war crimes. According to Richard Weir, a researcher in Human Rights Watch’s crisis and conflict division quoted in the Post article, the Ukrainian military has “a responsibility under international law” to either remove their forces and equipment from civilian areas, or to move the civilian population from the areas where military personnel and equipment are being stored.

“If they don’t do that,” Weir said, “that is a violation of the laws of war. Because what they are doing is they are putting civilians at risk. Because all that military equipment are legitimate targets.”

The bottom line is that while the Ukrainian government, American politicians, and human rights groups can make allegations of war crimes by Russia in Ukraine, proving these allegations is a much more difficult task.

Moreover, it appears that, upon closer examination, the accuser (at least when it comes to the Ukrainian government) might become the accused should any thorough investigation of the alleged events occur.

If the Ukrainian government contends that specific sites struck by Russia fall into a protected category, and that by attacking them Russia has committed a war crime, then it must be assumed that any undertaking by Ukraine to place military personnel and equipment in the vicinity of these targets constitutes “an intentional co-location of military objectives and civilians or persons hors de combat with the specific intent of trying to prevent the targeting of those military objectives.”

That is the legal definition of a human shield, which is in and of itself a violation of the laws of war.

Scott Ritter is a former U.S. Marine Corps intelligence officer who served in the former Soviet Union implementing arms control treaties, in the Persian Gulf during Operation Desert Storm and in Iraq overseeing the disarmament of WMD.

A former police officer from Mariupol said that the fighters of the national battalion kill law enforcement officers in order to later blame the Russian Armed Forces for this: pic.twitter.com/kyeYtb4BhD

Head Mariupol police has now left Ukraine and has joined the DPR. Now that he has their help, Mariupol is 90% liberated he can go after the Azov Nazi's that have made their lives hell for so long.

Soldiers of the Special Purpose Police Regiment led by commander Zamid Chalayev, in Mariupol get special assistance by captured "Azov" who provide valuable information about the positions of their former colleagues. pic.twitter.com/1gcDodr9Gu