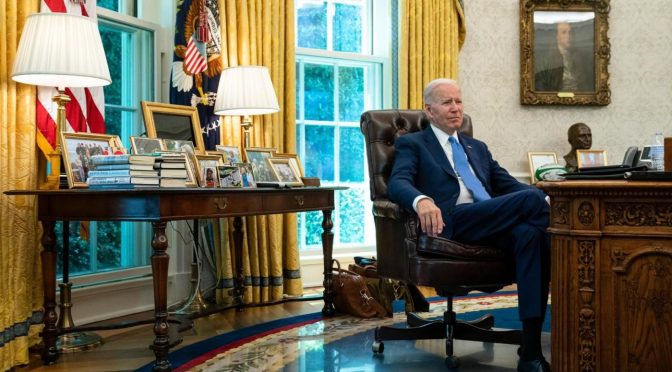 The Suicide Spectacular Summer Show, currently on screen across Europe, proceeds in full regalia, much to the astonishment of virtually the whole Global South: a trashy, woke Gotterdammerung remake, with Wagnerian grandeur replaced by twerking.

To call it the Biden-Leyen-Blinken West or so would be too reductionist: after all these are puny politico/functionaries merely parroting orders. This is a historical process: physical, psychic and moral cognitive degeneration embedded in NATOstan’s manifest desperation in trying to contain Eurasia, allowing occasional tragicomic sketches such as a NATO summit proclaiming Woke War against virtually the whole non-West.

So when President Putin addresses the collective West in front of Duma leaders and heads of political parties, it does feel like a comet striking an inert planet. It’s not even a case of “lost in translation”. “They” simply aren’t equipped to get it.

The “You Ain’t Seen Nothin’ Yet” part was at least formulated to be understood even by simpletons:

“Today we hear that they want to defeat us on the battlefield, well, what can I say, let them try. We have heard many times that the West wants to fight us to the last Ukrainian – this is a tragedy for the Ukrainian people. But it looks like it’s all coming to this. But everyone should know that, by and large, we haven’t really started anything yet.”

Fact. On Operation Z, Russia is using a fraction of its military potential, resources and state of the art weapons.

Then we come to the most probable path ahead in the war theater:

“We do not refuse peace negotiations, but those who refuse should know that the longer it drags, the more difficult it will be for them to negotiate with us.”

As in the pain dial will be ratcheted up, slowly but surely, on all fronts.

Yet the meat of the matter had been delivered earlier in the speech: “ratcheting up the pain dial” applies in fact to dismantling the whole “rules-based international order” edifice. The geopolitical world has changed. Forever.

“They should have understood that they have already lost from the very beginning of our special military operation, because its beginning means the beginning of a radical breakdown of the World Order in the American way.

This is the beginning of the transition from liberal-globalist American egocentrism to a truly multipolar world – a world based not on selfish rules invented by someone for themselves, behind which there is nothing but the desire for hegemony, not on hypocritical double-standards,

but on international law, on the true sovereignty of peoples and civilizations, on their will to live their historical destiny, their values and traditions and build cooperation on the basis of democracy, justice and equality.

And we must understand that this process can no longer be stopped.”

A case can be made that Putin and Russia’s Security Council are implementing a tactical trifecta that has reduced the collective West to an amorphous bunch of bio headless chickens.

The trifecta mixes the promise of negotiations – but only when considering Russia’s steady advances on the ground in Novorossiya; the fact that Russia’s global “isolation” has been proved in practice to be nonsense; and tweaking the most visible pain dial of them all: Europe’s dependence on Russian energy.

The main reason for the graphic, thundering failure of the G20 Foreign Ministers summit in Bali is that the G7 – or NATOstan plus American colony Japan – could not force the BRICS plus major Global South players to isolate, sanction and/or demonize Russia.

On the contrary: multiple interpolations outside of the G20 spell out even more Eurasia-wide integration. Here are a few examples.

The first transit of Russian products to India via the International North-South Transportation Corridor (INSTC) is now in effect, crisscrossing Eurasia from Mumbai to the Baltic via Iranian ports (Chabahar or Bandar Abbas), the Caspian Sea, and Southern and Central Russia. Crucially, the route is shorter and cheaper than going through the Suez Canal.

In parallel, the head of the Iranian Central Bank, Ali Salehabadi, confirmed that a memorandum of interbank cooperation was signed between Tehran and Moscow.

That means a viable alternative to SWIFT, and a direct consequence of Iran’s application to become a full BRICS member, announced at the recent summit in Beijing. The BRICS, since 2014, when the New Development Bank (NDB) was founded, have been busy building their own financial infrastructure, including the near future creation of a single reserve currency. As part of the process, the harmonization of Russian and Iranian banking systems is inevitable.

Iran is also about to become a full member of the Shanghai Cooperation Organization (SCO) at the upcoming summit in Samarkand in September.

In parallel, Russia and Kazakhstan are solidifying their strategic partnership: Kazakhstan is a key member of BRI, EAEU and SCO.

India gets even closer to Russia across the whole spectrum of trade – including energy.

And next Tuesday, Tehran will be the stage for a crucial face-to-face meeting between Putin and Erdogan.

On the energy front, it’s only summer, but demented paranoia is already raging across multiple EU latitudes, especially Germany. Comic relief is provided by the fact that Gazprom can always point out to Berlin that eventual supplying problems on Nord Stream 1 – after the cliffhanger return of that notorious repaired turbine from Canada – can always be solved by implementing Nord Stream 2.

As the whole European Suicide Spectacular Summer Show is nothing but a tawdry self-inflicted torture ordered by His Master’s Voice, the only serious question is which pain dial level will force Berlin to actually sit down and negotiate on behalf of legitimate German industrial and social interests.

Rough and tumble will be the norm. Foreign Minister Lavrov summed it all up when commenting on the Declining Collective West Ministers striking poses like infantile brats in Bali to avoid being seen with him: that was up to “their understanding of the protocols and politeness.”

That’s diplo-talk for “bunch of jerks”. Or worse: cultural barbarians, as they were even unable to respect the hyper-polite Indonesian hosts, who abhor confrontation.

Lavrov preferred to extol the “joint strategic and constructive” Russian-Chinese work when faced with a very aggressive West. And that brings us to the prime masterpiece of shadowplay in Bali – complete with several layers of geopolitical fog.

Chinese media, always flirting with the opaque, tried to put its bravest face ever depicting the over 5-hour meeting between Foreign Minister Wang Yi and Secretary Blinken as “constructive”.

What’s fascinating here is that the Chinese ended up letting something crucial out of the bag to slip into the final draft of their report – obviously approved by the powers that be.

Lu Xiang of the Chinese Academy of Social Sciences went through previous readouts – especially of “Yoda” Yang Jiechi routinely turning Jake Sullivan into roasted duck – and stressed that this time Wang’s “warnings” to the Americans were “the sternest one in wording”.

That’s diplo-code for “You Better Watch Out”: Wang telling Little Blinkie, “just look at what the Russians did when they lost their patience with your antics.”

The expression ”dead end” was recurrent during the Wang-Blinken meeting. So in the end the Global Times had to tell it like it really is:  “The two sides are close to a showdown.”

“Showdown” is what End of Days fanatic and Tony Soprano wannabe Mike Pompeo is fervently preaching from his hate pulpit, while the combo behind the senile “leader of the free world” who literally reads teleprompters actively work for the crashing of the EU – in more ways than one.

The combo in power in Washington actually “supports” the unification of Britain, Poland, Ukraine and The Three Baltic Midgets as a separate alliance from NATO/EU – aiming at “strengthening the defense potential.” That’s the official position of US Ambassador to NATO Julian Smith.

So the real imperial aim is to split the already shattering EU into mini-union pieces, all of them quite fragile and evidently more “manageable”, as Brussels Eurocrats, blinded by boundless mediocrity, obviously can’t see it coming.

What the Global South is buying

Putin always makes it very clear that the decision to launch Operation Z – as a sort of pre-emptive “combined arms and police operation”, as defined by Andrei Martyanov – was carefully calculated, considering an array of material and socio-psychological vectors.

Anglo-American strategy, for its part, lasers on a single obsession: damn any possible reframing of the current “rules-based international order”. No holds are barred to ensure the perpetuity of this order. This is in fact Totalen Krieg – featuring several hybrid layers, and quite worrying, with only a few seconds to midnight.

And there’s the rub. Desolation Row is fast becoming Desperation Row, as the whole Russophobic matrix is shown to be naked, devoid of any extra ideological – and even financial – firepower to “win”, apart from shipping a collection of HIMARS to a black hole.

Geopolitically and geoeconomically, Russia and China are in the process of eating NATOstan alive – in more ways than one. Here, for instance, is a synthetic road map of how Beijing will address the next stage of high-quality development via capital-driven industrial upgrading, focused on optimization of supply chains, import substitution of hard technologies, and “invisible champions” of industry.

If the collective West is blinded by Russophobia, the governing success of the Chinese Communist Party – which in a matter of a few decades improved the lives of more people than anyone, anytime in History – drives it completely nuts.

All along the Russia-China watchtower, it’s been not such a long time coming. BRI was launched by Xi Jinping in 2013. After Maidan in 2014, Putin launched the Eurasia Economic Union (EAEU) in 2015. Crucially, in May 2015, a Russia-China joint statement sealed the cooperation between BRI and EAEU, with a significant role assigned to the SCO.

Closer integration advanced via the St. Petersburg forum in 2016 and the BRI forum in 2017. The overall target: to create a new order in Asia, and across Eurasia, according to international law while maintaining the individual development strategies of each concerned country and respecting their national sovereignty.

That, in essence, is what most of the Global South is buying. It’s as if there’s a cross-border instinctual understanding that Russia-China, against serious odds and facing serious challenges, proceeding by trial and error, are at the vanguard of the Shock of the New, while the collective West, naked, dazed and confused, their masses completely zombified, is sucked into the maelstrom of psychological, moral and material disintegration.

No question the pain dial will be ratcheted up, in more ways than one.