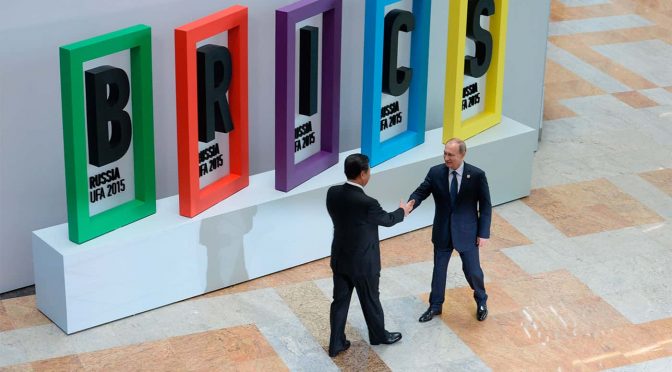 The kingdom of Saudi Arabia, along with Turkey and Egypt, may apply next year, the BRICS Forum president told Russian media.

Saudi Arabia, Turkey, and Egypt plan to join BRICS, and their potential membership bids could be discussed and answered at next year’s summit in South Africa, Purnima Anand, the president of the organization, told Russian media on Thursday.

“All these countries have shown their interest in joining [BRICS] and are preparing to apply for membership. I believe this is a good step, because expansion is always looked upon favorably; it will definitely bolster BRICS’ global influence,” she told Russian newspaper Izvestia.

The BRICS nations (Brazil, Russia, India, China, and South Africa) account for over 40% of the global population and nearly a quarter of the world’s GDP. The bloc’s stated purposes include promoting peace, security, development, and cooperation globally, and contributing to the development of humanity.

Anand said the issue of expansion was raised during this year’s BRICS summit, which took place in late June in Beijing.

The BRICS Forum president said she hopes the accession of Saudi Arabia, Turkey, and Egypt will not take much time, given that they “are already engaged in the process,” though doubts that all three will join the alliance at the same time.

“I hope that these countries will join the BRICS quite shortly, as all the representatives of core members are interested in expansion. So it will come very soon,” Anand added.

The news of the three nations’ plans to join BRICS comes after Iran and Argentina officially applied for membership in late June, with Iranian Foreign Ministry spokesman Saeed Khatibzadeh touting the bloc as a “very creative mechanism with broad aspects.”

West is struggling to compete with Asia and Africa

The West is finding it more difficult to compete with Asian and African countries as people in these regions are beginning to understand the value of their own natural resources, the president of the BRICS international forum, Purnima Anand, said in an interview with RT on Thursday.

Anand argued that for a long time Western nations had been trying to establish the supremacy of the US dollar by exploiting the human and natural resources of other countries and continents. However, she noted, as the level of education increases, the people of Asia, Africa and other regions are beginning to understand the value of their own natural resources and their own development potential, and are now beginning to compete with Europe.

“The competition in Europe which they had among European countries is now flowing towards other continents and other countries,” stated Anand, claiming that the EU is beginning to lose competitiveness.

In her view, the countries of BRICS – an alliance that includes Brazil, Russia, India, China and South Africa – are progressing and it is “high time” they can demonstrate their development policies.

The international forum president also highlighted how the BRICS group played a “very important role” during the Covid-19 pandemic, adding that, now, amid the conflict in Ukraine, BRICS nations are “trying to make the balance.”

On the topic of Ukraine, Anand noted how the situation has led to dire consequences for people around the world and how sanctions imposed by the West against Russia have backfired.

“American sanctions on Russia spoil all traditional rules of trading all over the world,” she stated, highlighting that Russia was not just trading with Europe, but with numerous countries in Africa, Asia, Latin America and the Middle East.

“When the sanctions started then the whole world suffered […] because all transportation and logistic systems just came to a stop,” she said.

Anand insisted that American sanctions on Russia need to be urgently reviewed and that the conflict in Ukraine will never be resolved unless the US and NATO take it “seriously.”

She also mentioned how the EU has a hard time adapting to the changing political landscape due to its reliance on the US for its policies. The EU has always had “internal democratic problems” and inflation has long been an issue for the union, Anand observed, adding that the conflict in Ukraine significantly exacerbated these issues.

As a solution to these problems, the EU is adopting policies that are backed by the US, which, Anand claims, cannot work because different countries require different approaches.

She stated that the policies the EU has adopted thus far have culminated in “results that are not in the favor of the people,” noting that people in the bloc are suffering as prices on everything from gas to general costs of living are increasing.