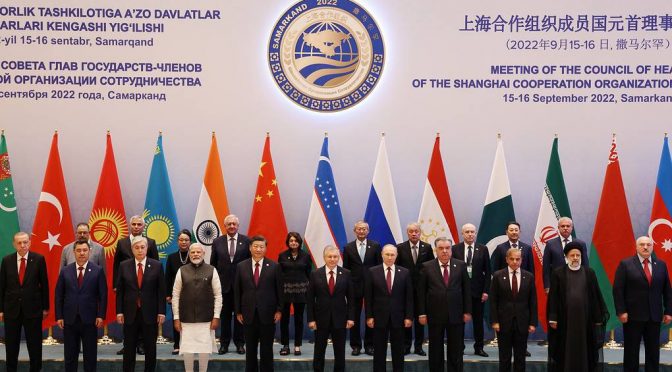 Member-countries welcomed the signing of memorandums of understanding with the League of Arab States, UNESCO, the Economic and Social Commission for Asia and the Pacific.

SAMARKAND, September 16. /TASS/. The expansion of the Shanghai Cooperation Organization and its deeper cooperation with international associations will contribute to ensuring security and stability in the region, says the SCO’s Samarkand Declaration adopted on Friday.

“The member-states emphasized the idea that the expansion of the SCO and the further deepening of cooperation with the observer states, the SCO’s dialogue partners and international associations will build up the organization’s potential and contribute to further enhancing its role in the international scene as a multilateral mechanism for solving urgent problems of our time, ensuring security, stability and sustainable development in the region,” the declaration states.

The participating countries confirm the SCO’s openness to interested states, whose goals and aspirations comply with the criteria and conditions contained in the organization’s legal documents. They noted the importance of the decision taken on September 17, 2021 at the Dushanbe summit to launch the procedure of Iran’s admission. On Friday, a memorandum of Iran’s commitments was signed for the purpose of Iran’s accession to the SCO as a full-fledged member-state.

The declaration also emphasizes the importance of the decision to start the procedure for the admission of the Republic of Belarus.

“The member-states note with satisfaction the decision to grant the Kingdom of Bahrain, the Republic of Maldives, the State of Kuwait, the United Arab Emirates and the Republic of the Union of Myanmar the status of SCO dialogue partners. They also noted the signing of memorandums on granting the status of an SCO dialogue partner with the Arab Republic of Egypt, the Kingdom of Saudi Arabia and the State of Qatar,” the declaration says.

In addition, the member-countries welcomed the signing by the SCO Secretariat of memorandums of understanding with the General Secretariat of the League of Arab States, UNESCO, the Economic and Social Commission for Asia and the Pacific. “The member states will continue to search for common points of view on foreign policy issues of mutual interest, including in international organizations and international forums,” the declaration stressed.

TASS is Russia’s leading state news agency, and on September 1, 2021, the agency celebrated its 117th anniversary.