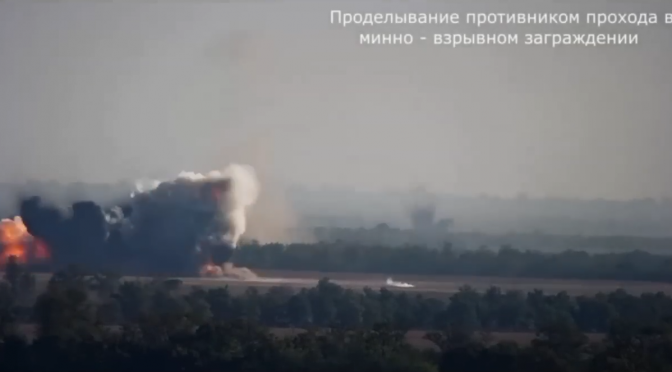 Shown here is how the Ukrainian Army tried their best to advance in the Kherson region, but experienced grave consequences. Total waste of lives, yet still in line with NATO’s plan to fight Russian aggression to the last Ukrainian.

Ukrainian forces are moving toward the Russian border city of Kherson, media and local officials report. The Russian authorities have begun relocating residents eastward across the Dnieper River.

Kherson, the capital of a formerly Ukrainian region that joined Russia following a referendum in September, is located on the western bank of the Dnieper River, which exposes it to possible Ukrainian attacks. On Wednesday, the deputy head of the local administration, Kirill Stremousov, reported an escalation of hostilities involving up to two Ukrainian infantry battalions.

“After preliminary bombardment by the artillery, the group went on the offensive. There is a large number of enemy middle-range drones and reconnaissance Bayraktar drones keeping out of the reach of air defenses,” he announced in a statement on social media.

“At this point of time, all attacks have been fended off. We are holding the defense line,” the official added.

The regional and city authorities had earlier offered assurances that Russia had no intention of allowing Ukraine to capture Kherson. At the same time, Russian officials warned that the Ukrainian move posed an imminent threat to the people residing in the city.

On Tuesday, the head of the region, Vladimir Saldo, announced that the civilian population of Kherson would be relocated to the other side of the Dnieper. He warned that Ukraine could destroy a dam at the Kakhovka hydropower plant upstream, which would make crossing the river much more difficult for some time. In his latest comments he estimated that over 5,000 civilians had been moved out of Kherson in less than two days.