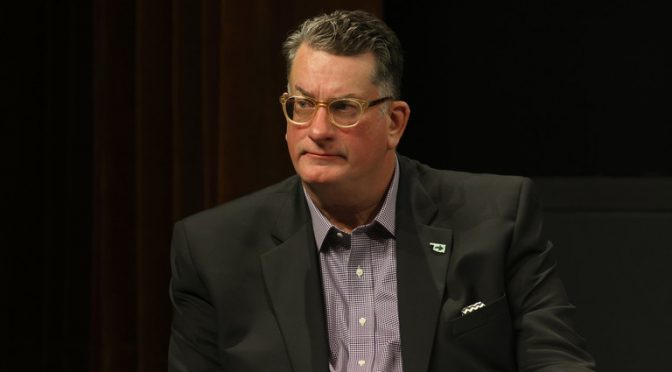 The Nazis who are deeply embedded in all branches of the US corporate government are now actively, nay desperately, suppressing dissent from within its own ranks as their anti-Russian propaganda in Ukraine, among others, continue to suffer from counterexposures for what they really are, i.e., lies.

The CIA has been feeding mainstream media “journalists” with exclusive information they want to share to the public ever since its inception by Nazis escaping Germany prior, during and post-WW2.

One of those journalists who benefitted from its feed was ABC News national security investigative producer James Gordon Meek. He disappeared from public view after an FBI raid back in April 27.

At a minute before 5 a.m. on April 27, ABC News’ James Gordon Meek fired off a tweet with a single word: “FACTS.”

The network’s national-security investigative producer was responding to former CIA agent Marc Polymeropoulos’ take that the Ukrainian military — with assistance from the U.S. — was thriving against Russian forces.

Polymeropoulos’ tweet — filled with acronyms indecipherable to the layperson, like “TTPs,” “UW,” and “EW” — was itself a reply to a missive from Washington Post Pentagon reporter Dan Lamothe, who noted the wealth of information the U.S. military had gathered about Russian ops by observing their combat strategy in real time.

The interchange illustrated the interplay between the national-security community and those who cover it. And no one straddled both worlds quite like Meek, an Emmy-winning deep-dive journalist who also was a former senior counterterrorism adviser and investigator for the House Homeland Security Committee.

To his detractors within ABC, Meek was something of a “military fanboy.” But his track record of exclusives was undeniable, breaking the news of foiled terrorist plots in New York City and the Army’s coverup of the fratricidal death of Pfc. Dave Sharrett II in Iraq, a bombshell that earned Meek a face-to-face meeting with President Obama.

With nine years at ABC under his belt, a buzzy Hulu documentary poised for Emmy attention, and an upcoming book on the military’s chaotic withdrawal from Afghanistan, the 52-year-old bear of a man seemed to be at the height of his powers and the pinnacle of his profession.

Outside his Arlington, Virginia, apartment, a surreal scene was unfolding, and his storied career was about to come crashing down. Meek’s tweet marked the last time he’s posted on the social media platform.

In the raid’s aftermath, Meek has made himself scarce. None of his Siena Park neighbors with whom Rolling Stone spoke have seen him since, with his apartment appearing to be vacant. Siena Park management declined to confirm that their longtime tenant was gone, citing “privacy policies.” Similarly, several ABC News colleagues — who are accustomed to unraveling mysteries and cracking investigative stories — tell Rolling Stone that they have no idea what happened to Meek.

“He fell off the face of the Earth,” says one. “And people asked, but no one knew the answer.”

An ABC representative tells Rolling Stone, “He resigned very abruptly and hasn’t worked for us for months.”

“Mr. Meek is unaware of what allegations anonymous sources are making about his possession of classified documents,” his lawyer, Eugene Gorokhov, said in a statement. “If such documents exist, as claimed, this would be within the scope of his long career as an investigative journalist covering government wrongdoing. The allegations in your inquiry are troubling for a different reason: they appear to come from a source inside the government. It is highly inappropriate, and illegal, for individuals in the government to leak information about an ongoing investigation. We hope that the DOJ [Department of Justice] promptly investigates the source of this leak.”

It is unclear what story, if any, would have put Meek in the FBI’s crosshairs. Meek worked on extremely sensitive topics — from high-profile terrorists to Americans held abroad to the exploits of Erik Prince, the founder of the infamous military contractor Blackwater.

In recent years, some of Meek’s highest-profile reporting delved into a 2017 ambush by ISIS in Niger that left four American Green Berets dead. Meek and ABC then adapted the story into the feature-length documentary 3212 Un-Redacted, which debuted last year on Veteran’s Day on ABC’s sister company Hulu.

Even stranger, in the months before he vanished, Meek was finishing up work on a book for Simon & Schuster titled Operation Pineapple Express: The Incredible Story of a Group of Americans Who Undertook One Last Mission and Honored a Promise in Afghanistan, which he co-authored with Lt. Col. Scott Mann, a retired Green Beret.

Meek even featured a picture of the soon-to-publish book in his bio on social media and frequently tweeted about his involvement. But post-April 27, the book-jacket photo disappeared from his bio, and Simon & Schuster has scrubbed his name from all press materials. The first sentence of the jacket previously read:

“In April, an urgent call was placed from a Special Forces operator serving overseas.”

Early press materials, available on the Wayback Machine, gushed about Meek’s credentials: “He has covered the rise of Al Qaeda since 1998, from the Millennium Plot to reporting from the ground outside the Pentagon after a hijacked plane hit it on September 11, 2001, to combat embeds with US and Afghan Special Forces in Afghanistan.

James has looked terrorists in the eye including 9/11 mastermind Khalid Shaikh Mohammed at Guantánamo, ‘shoe bomber’ Richard Reid and ‘dirty bomber’ Jose Padilla inside the Supermax federal prison, and Zacarias Moussaoui at his trial.”

Now is not the time to demand for facts from your CIA sources.

The acronyms mentioned above could mean:

The CIA handlers don’t want the cannon fodders to know what exactly are they dealing with as they are sent to their graveyard.

The stakes are so high that both sides of the hybrid war consider the current situation as absolutely existential in nature, and all options are on the table.

Or, maybe humanity will have a shot at winning this time around as insiders are coming out with explosive first-hand information, and countries ,which couldn’t express where they stand, are now showing political will in advancing their own geopolitical and economic interests.