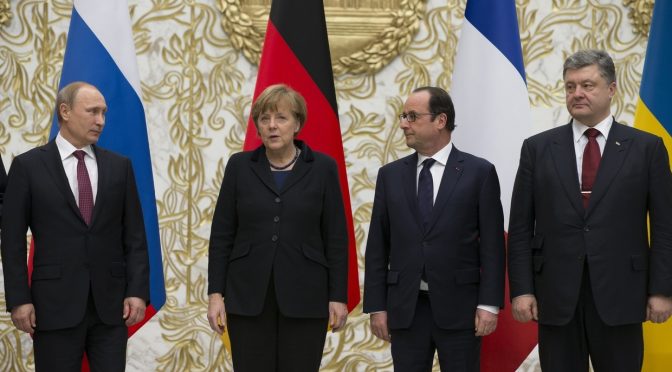 As Merkel’s comments reveal, the war mentality in the West against Russia has been extant for over a decade if not longer.

It is becoming irrefutably clear that the United States and its NATO partners have been planning for many years for the current war in the Ukraine against Russia. That fact makes the prospects for peace all the more elusive. How to negotiate with a mindset that is so deeply invested and ingrained with belligerence?

Western governments and media accuse Russia of “unprovoked aggression” against Ukraine and are clamoring for Moscow to hand over eye-watering financial compensation as well as face war crimes prosecutions.

The bitter irony is that the war in Ukraine, which is dangerously escalating and could spiral into a nuclear cataclysm, was sown by the United States and its accomplices. It is the West that bears ultimate responsibility for this abysmal situation, not Russia.

Former German Chancellor Angela Merkel (2005-2021) is the latest Western source to come clean or let their guard down. She disclosed in a recent interview with Der Spiegel the real roots of the war.

Merkel’s reprehensible revelation is inadvertent. She refers to appeasing the Ukrainian regime as a way to eventually build up its fighting strength against Russia. She invokes this reasoning as a way to justify why she objected to Ukraine’s earlier membership of the NATO alliance in 2008. The fact of membership wasn’t wrong, it was just a matter of wrong timing, according to Merkel.

As respected independent military analyst Scott Ritter points out, Merkel also knew that the Kiev regime installed by the CIA-backed coup d’état in 2014 was not interested in a peaceful resolution of the civil war in that country.

The unspoken policy in Berlin was all about buying time for the anticipated aggression against Russia. This was in spite of the fact that Germany along with France was supposed to be a guarantor of the Minsk peace agreements negotiated in 2014 and 2015.

In other words, Ukraine was primed for war against Russia from 2014 onwards.

Merkel’s admission is therefore really a confession of Western duplicity towards Russia, as Ritter astutely notes.

When Russian President Vladimir Putin ordered the military intervention into Ukraine on February 24 this year, the order was one of force majeure because the offensive threat from the NATO-backed Kiev regime had crossed Russia’s red lines. Those red lines had been repeatedly conveyed to the West by Moscow to no avail.

Thus, the Western media claims about “Russian aggression” are propaganda laundering about the real causes of and responsibilities for the war.

NATO chief Jens Stoltenberg and other NATO commanders have also admitted on several occasions that the coup in Kiev was followed by massive weaponizing of the regime by the United States and other Western powers.

Washington was pumping billions of dollars worth of weapons into the NeoNazi paramilitary forces between 2014 and 2022. Military trainers from the U.S., Britain, Canada and other NATO members were on the ground in Ukraine preparing their charges even while these forces were shelling and killing Russian people in the Donbass. This wasn’t just happenstance or hapless association. It was a calculated build-up for war.

This pernicious perspective ties in totally with the gloating earlier this year by former Ukrainian President Petro Poroshenko who said that the Minsk accords were never intended to be implemented but rather were used cynically as a staging post to consolidate offensive forces surreptitiously in order to eventually take the fight to Russia.

Moscow can be criticized on two counts. Arguably, it should have moved at an earlier stage to safeguard the Donbass territories. Waiting eight years to do so has made the task all the more difficult.

Secondly, it is lamentable that Moscow was duped – again – by Western promises. The whole Minsk peace process turned out to be a charade that the Western powers and their Kiev catspaw never respected despite the rhetoric. As it turns out, Russia was the only party that took the Minsk accords seriously. And it has paid a heavy price for buying that.

One would think that Russia should have learned its lesson from the way promises about the non-expansion of NATO were shamelessly betrayed. From “not an inch” eastwards to 1,000 miles towards Russia’s borders, the present dangerous confrontation in Ukraine is a manifestation of systematic and unrelenting treachery shown by Washington and its NATO minions.

The concerted gung-ho U.S.-led response to Russia’s intervention in Ukraine, the Total War reflex, the avalanche of weapons from the West, the sabotage of Nord Stream pipelines, and the readiness to escalate violence – all indicate that this war was ready to go.

The high-handed dismissal of Russia’s strategic security concerns and shunning of any diplomatic engagement point to the Western powers as being on a war footing from the outset like a coiled spring.

Unconscionably, there seems to be a deliberate stepwise increase in provocations. The United States and its allies are funneling heavier weapons into Ukraine that are now capable of striking deep into Russian territory. This week saw drone strikes on airbases up to 600 kilometers inside Russia from the Ukrainian border. One of the targets at Ryazan is only 185 km from Moscow.

And yet fork-tongued Washington officials claim they are not encouraging the Kiev regime to escalate. This after arming an unhinged and Russia-hating regime to the teeth with longer-range weapons.

Moscow is caught in a contradiction. It says that the Western powers are directly participating in hostilities. If that’s the case then all bets are off for Russia to take military action against Western assets. If Moscow refrains, then it looks weak.

The perplexing thing is that the war plan on Russia is evidently an endemic concept that transcends present Western political officeholders. As Merkel’s comments reveal, the war mentality in the West against Russia has been extant for over a decade if not longer. As we described in last week’s editorial, the anti-Russian agenda in the United States and its NATO war machine can be traced all the way back to the end of World War Two.

That makes the challenges of politics and diplomacy even more daunting. Because the United States and its minions are ostensibly not capable and ultimately perhaps not willing to negotiate. They are strapped for war.