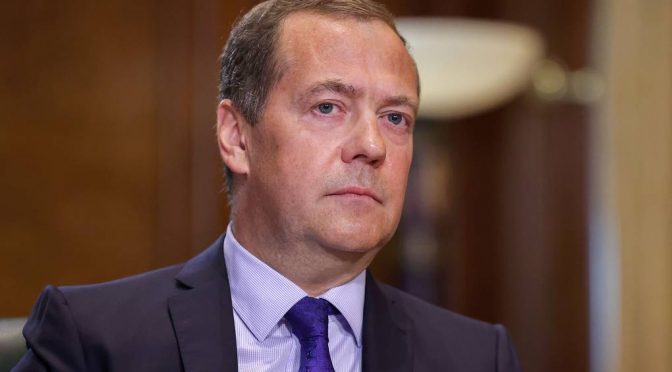 The deputy head of Russia’s Security Council believes that the agreement proposed by Kiev is tantamount to “applying Article 5 of the North Atlantic Pact to Ukraine.”

MOSCOW, September 13. /TASS/. Kiev will not receive any “security guarantees”, in particular, because its draft is essentially a “prologue” to World War III, the deputy head of Russia’s Security Council Dmitry Medvedev believes.

“The Kiev camarilla has given birth to a project of ‘security guarantees’, which are essentially a prologue to a third world war. Of course, no one will provide any ‘guarantees’ to the Ukrainian Nazis,” he wrote on his Telegram channel on Tuesday.

He believes that the agreement proposed by Kiev is tantamount to “applying Article 5 of the North Atlantic Pact to Ukraine.” This article refers to collective defense as a principle central to NATO’s founding treaty. Collective defense means that an attack on one of the alliance’s members shall be considered as an attack on all members.

Medvedev believes that Russia’s arch foes – “Western bosses of various rank” to whom “this hysterical appeal” (Kiev’s draft security compact, made public earlier on Tuesday – TASS) is addressed should understand one thing. “It directly concerns NATO’s hybrid war with Russia. If these half-wits go ahead with the rampant pumping of the most dangerous types of weapons to the Kiev regime, then sooner or later the military campaign will achieve another level,” he warned.

This campaign, Medvedev stressed, will have no visible borders, while the parties’ actions will turn potentially unpredictable. “The campaign will follow its own military scenario, involving ever more new participants. It has always been this way,” Medvedev said.